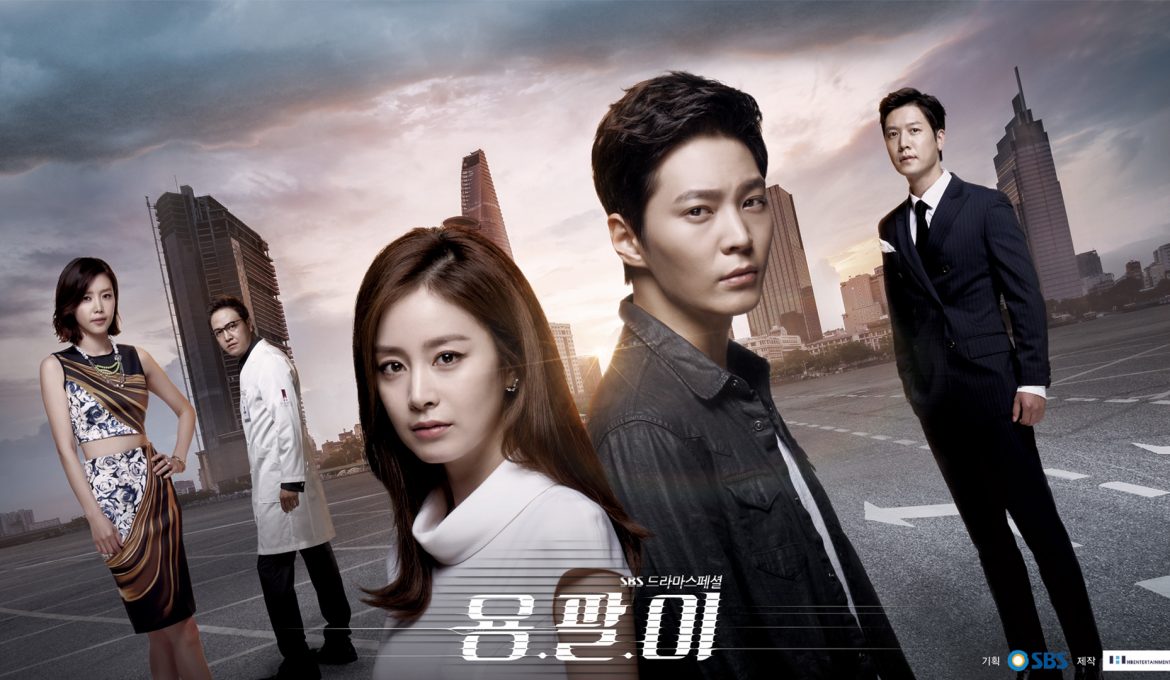 It’s so great to see Joo Won back with his newest drama, Yong Pal. The poster of him leaping over a wall was the first promotional material we saw for the drama. It reminds us of one of our recent watches, Healer (2014), which has Seo Jung Hoo (Ji Chang Wook) jump buildings. We loved Healer, so we were totally in for another drama like it! Going into the first couple episodes, there’s no roof-jumping or undercover missions. There is Kim Tae Hyun (Joo Won) working under an alias of Yong Pal to perform underground surgeries for gangsters to finance his debt for treatments for his ill sister, senior surgeons who aren’t as skilled as junior surgeons and corrupted priorities. There’s enough there that’s interesting to keep us watching.

The first couple episodes sets up what appears to be a story focusing on the preferential treatment and varying codes of conduct between the Hanshin Medical Center‘s VIP patients (for example patients who are connected to doctors in the hospital, well-known public figures) and normal patients who do not have connections to anyone important.

Female lead, Han Yeo Jin (Kim Tae Hee), belongs in the VIP group, being the sister of the chairman of Hanshin Group (which we’re assuming Hanshin Medical Center is a part of). After a series of events in the opening scenes of Episode 1 (which involves a car chase, her boyfriend daringly try outrunning a bunch of cars on their night out together and crashing leading to his death), Han Yeo Jin throws herself out a window of a high-rise apartment, landing herself in the hospital in an induced coma. (She comes off as suicidal after the death of her boyfriend.)

Because she is the sister of the chairman, she is well looked after at Hanshin Medical Center. She occupies a spacious room with state-of-the-art medical facilities with accompanying security detail and personal attention as nurses at their desks keep watch of her vitals with mobile devices.

A backstory in Episode 2 involving the death of Kim Tae Hyun‘s mother reveals preferential treatment and just how the priorities of Hanshin Medical Center work. When his mother arrives at the hospital as an average patient, doctors are ready to pronounce her dead based on a conclusion that because she already suffered a heart arrest on the way to the hospital, there was no use trying further to save her. After they learn that she is the mother of Kim Tae Hyun, a ‘doctor at the hospital’, the information kicks them into action and they start using all means to save her. A respected, highly-skilled surgeon is called in even.

So before, as ‘just a patient’, she had no hope of surviving and not even worth entering the hospital entrance. When she’s found to be Kim Tae Hyun‘s mother, her chances suddenly are worth going though those doors right into the operating theatre. Had the operation gone ahead, she may have survived; but we will never know: a sudden call for the respected, highly-skilled surgeon to tend to a patient more important than a mother who’s connected to a doctor at the hospital takes him away. Because she’s no longer ranked higher, Kim Tae Hyun‘s mother becomes lower priority. In the end she dies on the operating table as she suffers yet another heart arrest with the assisting surgeon (who’s not confident enough to perform the surgery on his own), Kim Tae Hyun (being not skilled enough) and the nurse watching on.

New medical interns with connections seem to have favour over those who don’t as well. Anyone who is connected to anyone in the hospital end up receiving better treatment too: they receive better evaluations and first pick of the specialty area they wish to head into as well as higher-ranked positions, regardless of their actual performance. Kim Tae Hyun makes this point during the induction of a new set of interns at the hospital. It seems Kim Tae Hyun, who’s from an average family and ridden with debt (because of his ill sister) experienced this first-hand. Despite being the more talented and more skilled doctor, he ranks under his fellow resident doctor, Park Tae Yong (Jo Bok Rae). After calling and singling out the new interns to make his point about connections, a call from Chief Surgeon Lee (Jung Woon In) comes in for a doctor to help out in the operating theatre. With Park Tae Yong taking seniority, it’s natural for him to be called, but no. It is Kim Tae Hyun Chief Surgeon Lee calls for.

It’s surprising Kim Tae Hyun hasn’t become bitter and gone out on a vendetta against the hospital for what happened with his mum as well as the unfair graduation system of interns. Kim Tae Hyun is not at all bitter.

With his sister suffering from liver disease and requiring dialysis, the hospital’s preferential treatment and corrupt ways can be advantageous. After performing surgeries on VIP patients, Kim Tae Hyun uses their families’ feeling of gratitude to extract money from them to help him pay his debt. He uses its corrupt system to keep people like Park Tae Yong from reporting him for leaving the hospital at nights when he’s not supposed to and facing disciplinary action. It allows him to go off-site at nights and use his surgical skills on gangsters, charge high prices and pay off the money he owes his loan shark.

Yong Pal‘s theme of the VIP versus the average patient is no different from dramas which use the rich versus the poor theme for their stories. When the medical elements, the action elements of Yong Pal is taken out, what’s left is a theme that’s frequently used in Korean dramas. It’s still interesting though.

We’re not sure if the drama will continue this theme throughout the rest of the drama as the story appears to be moving to the 12th Floor, the floor for the VIPs, where Han Yeo Jin is. After a police inquiry on Yong Pal‘s scalpel which was accidentally dropped during a raid of a nightclub he was performing surgery, Chief Surgeon Lee discovers his nightly underground practices. In order to be saved from being turned in to the police and losing his Doctor’s Licence, Kim Tae Hyun agrees to the new station as well as to answer to the hospital director’s every request and giving up operating ever again: he will not be able to operate in the hospital or at nights.

It feels like his days operating on gangsters are over with the transfer, his connection to underground operations are over. But then what about the scene in Episode 2 where he saves a gang leader who then orders Yong Pal‘s identity to be looked into? What about the loan shark who will probably be looking for him still? Then there’s the unauthorised surgery which Kim Tae Hyun is looking to perform on a patient who’s been left to pretty much die as the lack of family relations prevents the hospital from taking any actions. His secret operations look too be far from over.

We like the way the series has started. A lot has been set up in the first two episodes with plenty to develop from. We’re not hooked yet and aren’t sure what exactly we’re hanging out for, but we’ll be following the drama to see what comes from it. We like Kim Tae Hyun and how he’s not entirely upright in his ways as he’s influenced by his debt and desire to cure his younger sister. With Han Yeo Jin still yet to truly enter the story, it’ll be interesting to see what part she plays in the story. We’re hoping she adds to the themes of corruption and VIP versus the average patients, and not just play an ordinary love interest in the series. Chief Surgeon Lee‘s story is a bit interesting too. He comes off as a surgeon who probably got up the ranks through connections, but there was a hint that maybe that’s not the case. Perhaps he made some error in the past and was forced into serving the director the way Kim Tae Hyun is asked to do.

First two episodes went by fast. Hopefully, subsequent episodes are the same. Hopefully, it’ll be more focused on the hospital’s corrupt ways, Kim Tae Hyun‘s latest transgression and further build on the VIP versus the average patients theme because that’s what we find interesting at the moment.