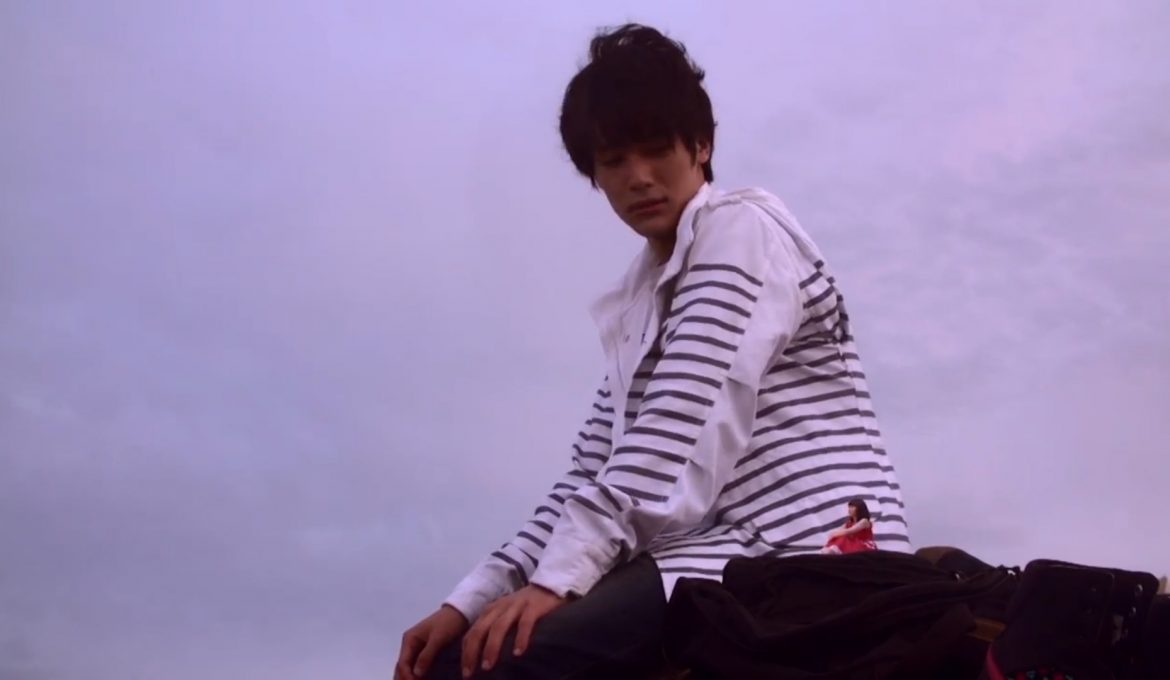 Minami Shunichi contently gazes down on Horikiri Chiyomi‘s sleeping form. After resolving and admitting his feelings aloud, he is seen contently gazing down at Horikiri Chiyomi‘s sleeping form. She’s a messy sleeper. Her bed sheets are all over the place, her legs are strewn about, hair fanned out and apparently has a tendency to roll about in her sleep which Minami Shunichi notes she does. She almost falls over the edge on this morning. Fortunately, Minami Shunichi has been watching her and catches her just before she does.

Horikiri Chiyomi wakes up and immediately realises he’s been watching her whilst she’s been asleep. He doesn’t deny it one bit as he asks her how she can sleep in that way.

It’s been four weeks since she became small, Horikiri Chiyomi narrates. Over scenes of them having breakfast together and her teasing Minami Shunichi about how it was so good to be eating delicious meals made by his grandma, she expresses that they’ve come a long way together. They’ve been in sync with each other and things are going really well between them.

Parents wants to bring in police to search for Horikiri Chiyomi

Whenever things are said to be going well, what seems to always follow is something that might change that. As Minami Shunichi and Horikiri Chiyomi head off to school, Horikiri Asuka brings news that her parents are wanting to bring in the police to look for Horikiri Chiyomi. Her parents are finding it strange how she can’t be contacted. Horikiri Asuka did try to stop them from going so far by saying how bringing in the police would make her sister uncomfortable, but it doesn’t change her parents’ minds.

Minami Shunichi is approached by Takagi Riku. He tells him Horikiri Chiyomi is in trouble before accusing Minami Shunichi of playing dumb and wanting to talk about the figurine in his pocket. He comes off looking like he knows everything, but it turns out he not clear about the truth at all.

Horikiri Asuka tries to comfort him by telling him that her disappearance has nothing to do with her writing, which almost has her parents question her why she sounded so sure. Saving herself with "that’s what I think", Horikiri Asuka‘s parents don’t go further than directing her an inquisitive gaze.

The newest piece of information about Horikiri Chiyomi seemed to have settled Horikiri Ritsuko and Horikiri Jouji about their daughter. Knowing that she wasn’t simply wandering in Tokyo when she should be attending the dance workshop might just put them off from bringing in the police. Still, they are quite surprised why she had to leave the house to write.

Hearing this, Horikiri Asuka tries her parents with the idea of Horikiri Chiyomi having turned small: "I wonder if… Onee-chan became a Chobiko for real", just to see what they thought of such a situation. They deny the possibility. What they believe is that she must have had a lot she wanted to say, but couldn’t (and was expressing it through her novels), which is very true with her Chobiko in a Pocket piece.

Sitting outside by the seaside alone, Minami Shunichi reads Horikiri Chiyomi‘s latest work for the first time. He learns about the thoughts she had about the day he went shopping with her to buy her a red dress and how he feels love towards him. She talks about being closer to him than any woman of his kind: she can feel his body heat and his heartbeat; but, she is also the farthest from him. The Big Guy wouldn’t possibly love her, but she’ll be happy just to be beside him as she loves him more than anyone in the world.

He comes very close to Minami Shunichi‘s desk where Horikiri Chiyomi‘s hiding as he does so. Fortunately, Minami Shunichi manages to take hold of him around the waist and drag him away. The action causes both of them to fall back onto the floor to have Takagi Riku discover the Moon Bunny sack which used to be on the toy bunny he made for Horikiri Chiyomi.

Getting nowhere with the question, Takagi Riku changes tack by blaming Minami Shunichi for causing Horikiri Chiyomi‘s one-sided love. He tells him that he should know that this is the case if he’s read Chobiko in a Pocket and to not hurt her. He asks him to just tell her he loves her if that is what he feels—why is he making her suffer?

As if Horikiri Chiyomi was right in front of him, Minami Shunichi tells her that he loves her, that she’s not in a one-sided love and that she’s already a part of him.

Horikiri Chiyomi apologises to Takagi Riku. She tells him she was sorry for not being able to give him a response to his confession as on the night he confessed to him, she became small. As she’s saying this, Takagi Riku is still having trouble believing what he’s seeing. It takes her to confirm she was Horikiri Chiyomi and that she became Chobiko for real before he comes around and begins addressing her normally.

He asks her about the red dress and whether Minami Shunichi gave it to her. (His mind seems to be on the details of her Chobiko in a Pocket story.) She tells him of the night she became small and how she had nothing to wear apart from the Moon Bunny sack that he made for the toy he gave her. She goes on to tell him how he helped her and how it was the first thing that protected her that night. If it wasn’t for him and the clothing for the toy, she would never have been able to come out and have Minami Shunichi see her and live on the way she has been.

Takagi Riku is relieved to have been able to be of help to her a little. In terms of her not being able to give him the answer, he tells her that a response wasn’t necessary since it was obvious after he read her Chobiko in a Pocket story. He tells her that if Minami Shunichi returned those feelings for her, then he knew he had no chance.

With Horikiri Chiyomi watching from Minami Shunichi‘s window, Takagi Riku bows out. Standing outside the house, he tells Minami Shunichi that he’s leaving Horikiri Chiyomi in his care. Just before he leaves, he offers Minami Shunichi one piece of information that might help Horikiri Chiyomi return to her normal size. He tells him that according to the legend of the One Inch Princess, the way she became big again involved not only the shaking of the lucky mallet (which is what they tried in a previous episode), but also going up to Akebono Cape to face the rising morning sun as she prayed.

Horikiri Chiyomi and Minami Shunichi set off to Akebono Cape

With that information, Minami Shunichi set off for Akebono Cape with Horikiri Chiyomi. They book a room at a Spring and spend the time enjoying a spa together; they feast on an elegant meal.

Unknown so to him, Minami Shunichi gains an admirer in the form of one of the Spa workers after checking in. It’s a short-lived crush as she finds out that Minami Shunichi has a girlfriend after enquiring about the time for the sunrise and hearing that he wanted to go to Akebono Cape to be happy with his girlfriend. (Subtle declaration of Horikiri Chiyomi‘s new title!)

Horikiri Chiyomi expresses the same thought to him. She tells him that she always wanted to be with him like that again some day, which has Minami Shunichi tell her that she can. He won’t run away anymore. He then tells her that he loves her (as in aishteru, not just daisuki!) as the sun starts to rise.

The part where Minami Shunichi leans in to kiss is another point in the episode that felt just a tiny bit weird to watch. When we don’t watch the scene and think about how back then he couldn’t care less about kissing her again, but now he really wants to and is only barely managing to hold back, it’s a really nice thing to see; but watching the scene, it makes us squirm a little.

What we liked about the episode is that Takagi Riku did get his episode. He was acknowledged and thanked by Horikiri Chiyomi. It was a nice to hear her say that Takagi Riku provided her the first bit of protection in the form of the Moon Bunny sack the night she turned small.

On to the final episode! Yay! Hoping for a happy ending. We’re really looking forward to her becoming big!