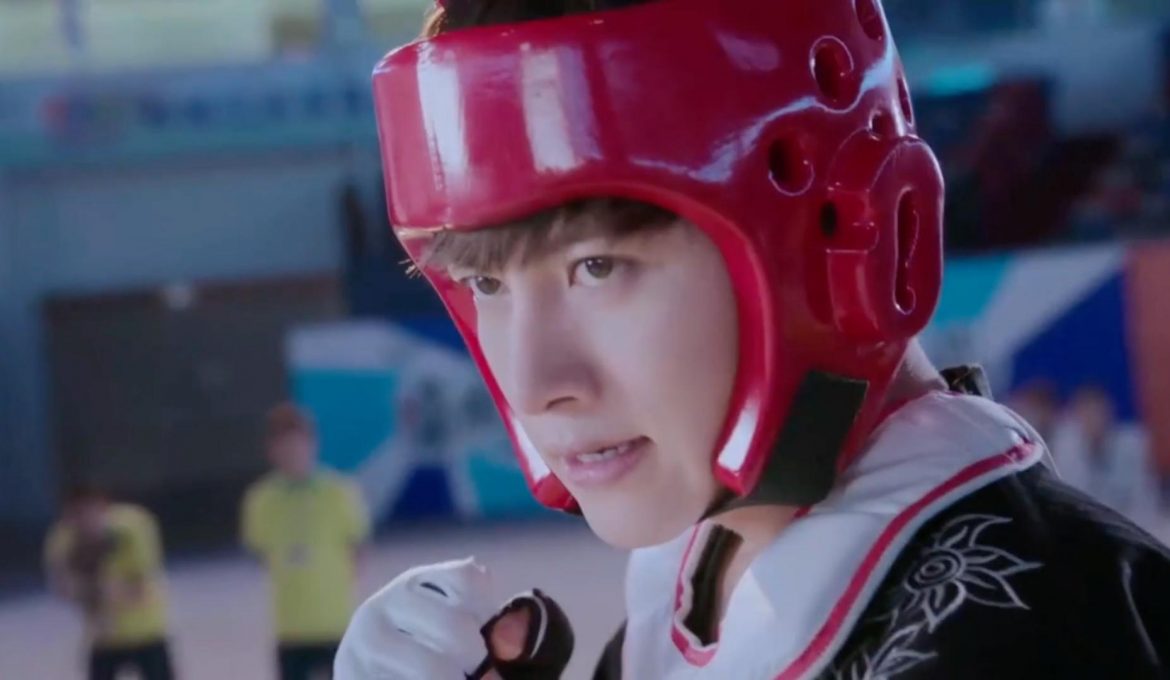 The apology for losing the contest that Feng Yun has to give to Song Bai becomes another occasion where the Song Bai gang hears Yin Xiu say Song Bai is a weak hall. In front of other Anyang Yuan Wu Dao halls Fan Xiao Ying has invited Yin Xiu says she’s willing to apologise to Song Bai because Song Bai is weak. Apologising is for the strong while begging for an apology is for the weak. Chang An corrects Yin Xiu. Apologising doesn’t pertain to the strong and the weak, but right and wrong.

Yin Xiu says for Chang An to follow her back to Feng Yun. Doing so is him giving Song Bai their only chance to advance into the professional league tournament. Yin Xiu turns her attention to Qi Bai Cao. She doesn’t like her Inch Stop technique of fighting. It lacks strength. Yin Xiu thinks Qi Bai Cao is foolish to compete with her for the MVP title. Qi Bai Cao tells Yin Xiu Song Bai isn’t scared of any contingent and is just as unafraid of challenges.

“Qi Bai Cao, your so-called unique skill is nothing but fancy footwork and a weakling’s tricks. Tomorrow, I will have you see what a strong fighter’s Yuan Wu Dao is.”

Back at Feng Yun, Yin Xiu goes to Fang Ting Hao when he’s releasing his disappointment over Qi Bai Cao not choosing to forfeit the competition. She comes with Shui Chen Zhou’s orders for him: he mustn’t make a mistake in this competition, Feng Yun must be Anyang’s number one hall, Song Bai must disappear and Chang An must return to Feng Yun.

Fang Ting Hao tells Yin Xiu to not use her commanding tone to speak to him. The fierce response has Yin Xiu say to Fang Ting Hao Chen Zhou is aware of his true thoughts and the way he’s conducting things. Chen Zhou cooperating with him and has a wish to continue cooperating with him is because, unlike Chang An, he’s harder to control. He will, however, only continue to do so if he helps him reach his goal. Yin Xiu hints a bad outcome if Fang Ting Hao doesn’t with a reminder of how Chen Zhou dealt with Chang An.

Fang Ting Hao isn’t afraid of Chen Zhou. Yin Xiu knows this. However, she wonders if he’s okay with Chen Zhou taking back control of the Yuan Wu Dao Professional League Tournament. Reminding Fang Ting Hao of how Shui Chen Zhou defeated Chang An, Yin Xiu says Chen Zhou hopes he doesn’t fail the expectations he has for him.

The competition between Song Bai and Feng Yun arrives. Lu Fei Yu is up first. He does well to get an early point on the board for Song Bai when his kick makes contact with his opponent’s back. After this, it’s his Feng Yun opponent who makes point-scoring attacks and ultimately knocks Lu Fei Yu out of the fighting stage with a powerful kick.

Hu Yi Feng is the next one to go up for Song Bai. However, when Fang Ting Hao surprises them all with halting Hu Yi Feng’s Feng Yun opponent from going up and sending himself up in his place, Chang An decides he’s the best person to go into the next match against Fang Ting Hao.

Qi Bai Cao is against Chang An going up to fight. His leg injury is in a too serious state, she says. Chang An sees no one else but himself who has that certainty of winning Fang Ting Hao. This is a fact that neither the Song Bai gang nor Qi Bai Cao can deny. However, Qi Bai Cao continues to try convincing Chang An. She says his injury will get more serious if he keeps going in this manner. Convincing Qi Bai Cao why he must go up to fight with his leg injury, Chang An says such feeling and choice is something Qi Bai Cao should understand with her having experienced it. He refers to the time she persisted in participating in the National Youth Competition when her leg was injured.

Chang An’s regret isn’t injuring his leg. It’s being betrayed and abandoned by the person he trusted most.

“For Feng Yun and for the same dream that Chen Zhou and I had, this leg broke. However, I’ve never regretted it. What brought me despair wasn’t the leg injury, but being betrayed and abandoned by the person I trusted most. This time is different. This time I’m certain those I trust won’t betray or abandon me.”

Chang An makes a point about how going up to fight with an injury is something every Song Bai team member has done before. His words bring Qi Bai Cao and everyone else to understand his decision to fight.

“For Song Bai, every one here today hasn’t gone up without an injury. If you can compete with an injury and do your best for Song Bai so can I. Don’t forget: protecting and reviving Song Bai is the responsibility of every one of you. It’s also my responsibility.”

Yin Xiu believes the reason Fang Ting Hao has chosen to personally go fight in the second match is to give Feng Yun two wins to prevent Qi Bai Cao from going in to fight her in the third match.

In the match, Chang An scores first with gaining three points from striking Fang Ting Hao’s chest. Fan Xiao Ying and the others are ecstatic about Chang An scoring against Fang Ting Hao. Hu Yi Feng and Qi Bai Cao, however, feel uncertain when they feel Fang Ting Hao isn’t using his full strength.

Chang An charges towards Fang Ting Hao to deal him a downward leg strike. Fang Ting Hao blocks it with an arm. It opens up the chance for Fang Ting Hao to swipe at Chang An’s other leg that’s keeping him standing. Chang An attempts to land two kicks at Fang Ting Hao as he gets catapulted into the air. Chang An’s kicks don’t make contact. He harshly and painfully lands onto the fighting stage floor.

“You clearly know Instructor Chang An’s leg is injured. Every time you go in to attack you target his injury. Is this competing? Are you still the open and honest Fang Ting Hao you once were in the past?”

“If you admit defeat I can still let you safeguard your right leg.”

Chang An doesn’t back down.

“Let me see how much you, Fang Ting Hao, have advanced in these few years.”

In another round of horizontal spinning kicks, Fang Ting Hao brings Chang An to the ground with a hit to his injured leg before gaining six points with a strike at his chest. He offers Chang An another chance to agree to admit defeat.

“I’ll give you one more chance. Leave Song Bai, leave Anyang, leave Bai Cao. Who knows?—I might send you a few more points.”

Chang An has no thought of leaving Song Bai, Anyang or Qi Bai Cao who he loves. This answer from Chang An has Fang Ting Hao warn him once nor of being unforgiving in his fighting when he says he forced him to.

With a handful of seconds left, the score is nine points for both Chang An and Fang Ting Hao. Fang Ting Hao can see how he can gain a point and win Chang An in his mind. It’s a kick to the chest, a downward kick on Chang An’s injured leg which will have him in pain then a kick to the chest. The resulting outcome comes to be a roundhouse kick and a strike at Fang Ting Hao’s chest from Chang An. Song Bai wins the second match with one point difference.

“You wanted Feng Yun to win two consecutive matches for another purpose. You’re afraid Bai Cao will get hurt, so you went to prevent Qi Bai Cao from fighting Yin Xiu. Am I right? Is Yin Xiu really that formidable?”

“Because I hate you all. I hate those with a natural gift. I want each and every one of you to be under my feet, faced down and begging for mercy.”

“Don’t tell me you learn Yuan Wu Dao only because of hate?

“I don’t know what sort of a feeling love is. I only know that hate will make me more formidable.”

“You dealt pretty well with those weak moves. I will now let you see what a strong move is.”

Spinning horizontally across the stage towards Qi Bai Cao like a drill, Yin Xiu uses her own move, The Total Annihilation Leg. It’s terrifyingly speedy. It’s no problem for Qi Bai Cao. Qi Bai Cao clearly sees the attack and avoids getting in its path. Yin Xiu charges at Qi Bai Cao with an aerial cartwheel. Qi Bai Cao avoids it with going overhead with a higher cartwheel. Yin Xiu executes Total Annihilation Leg one more time. With Qi Bai Cao responding to the move with a leap into the air and positioned above, Yin Xiu wants Qi Bai Cao to come at her with a downward leg strike at her head. Yin Xiu’s wish for Qi Bai Cao to execute the attack will allow her to show Qi Bai Cao and everyone in the arena she is the strongest fighter when she will dodge the attack to her head. After dodging the attack, she will deal a kick of her own to Qi Bai Cao’s head and bring Qi Bai Cao a defeat with her crashing down to the floor and face down.

Poor Fang Ting Hao. He couldn’t come out and say to Chang An he’s fighting the second match because he’s actually just really concerned about Qi Bai Cao going up against Yin Xiu in the third match so he’s trying to prevent it from taking place. However, all Fang Ting Hao could do was keep giving Chang An chance after chance to admit defeat and strike at his injured leg. That just made him look like he’s become as cold and ruthless as his Feng Yun members. Fang Ting Hao said to Chang An, “You forced me to” twice. In the end, Fang Ting Hao couldn’t go through with defeating Chang An and just let the match between Qi Bai Cao and Yin Xiu take place.

Qu Guang Ya figured it out, though. She’s very smart as usual. She can see why Fang Ting Hao had gone and fought the second match himself. We agree with Qu Guang Ya when she asked Fang Ting Hao about whether Yin Xiu is truly that formidable. Fang Ting Hao’s anxiety must be super high when the match started. So far, the match is looking like Fang Ting Hao needn’t have been so worried. Chang An has trained Qi Bai Cao well and she’s handling Yin Xiu’s might very well.