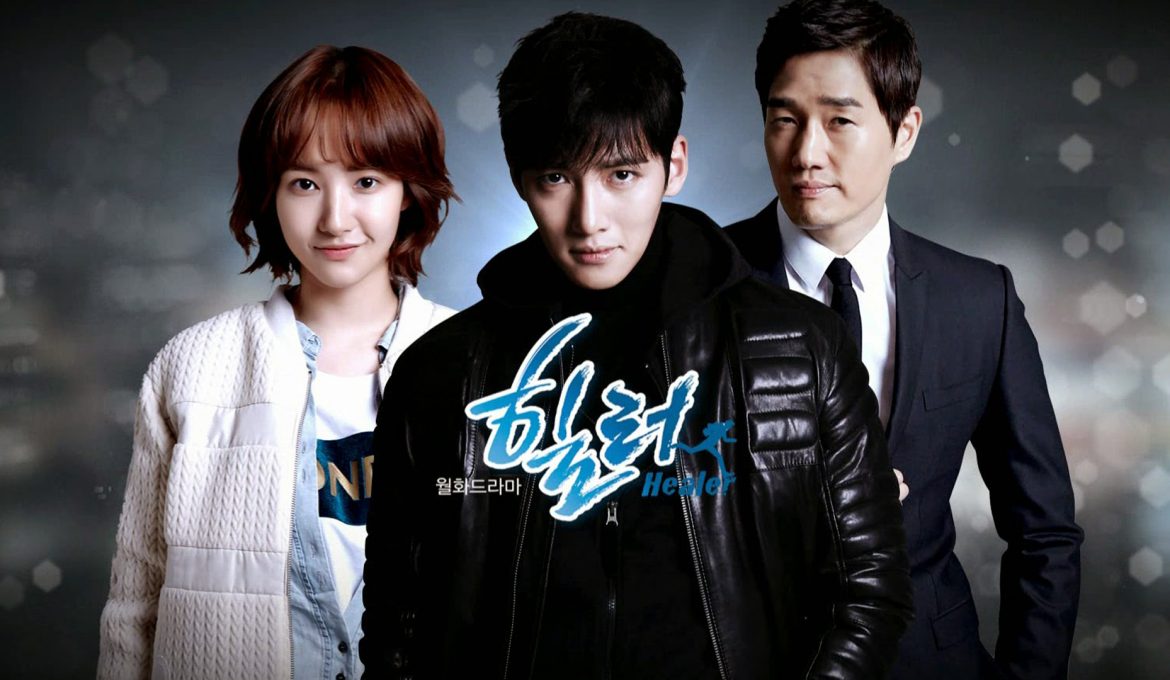 Healer / 힐러 is an action, drama, romance story set in a world where the powerful are corrupt with immense resources to block information on their illegal activities. An incident occurring many decades ago brings about a struggle between two sides—one wishing to hide the truth and the other working to uncover it.

The titular character, Healer (Ji Chang Wook), is a skilled fighter and master of disguise, specialising in carrying out requests from anonymous clients. These requests are more often than not dangerous in nature. When Healer takes on the requests of two anonymous clients, he becomes entangled in the affairs of a powerful and corrupt group at the top working hard to continue having the truth behind an incident that occurred decades ago hidden.

Healer was on our radar when it first came out in Dec 2014, but we put it on our very long list of dramas to watch as we tried to get through other dramas we started at the time. After seeing a lot of likes for Healer and finally catching up on a couple of on-air dramas we’ve been following this year, we thought it was a good time to see Healer for ourselves.

We haven’t come across a lot of Korean dramas that labels itself as an action/romance with a satisfying action plot. So, going into the series, we had hoped Healer would keep up a decent action plot.

From the opening sequence of the first episode, there is spy action: we see Healer in spy getup, running through a busy train station on a mission of tracking down a middle-aged man with an item Healer is hired to deliver to his anonymous client. A group of mysterious black-suited men are seen stationed around the vicinity, watching out for Healer. Fast forward to Healer reaching the middle-aged man and having jumped off a passenger train with the black-suited men converging towards them, a fight soon erupts between Healer and the black-suited men in the darkness of a section of an underground tunnel. Meanwhile, the terrified middle-aged man is hiding in some corner behind Healer. Healer later becomes trapped in between the railway tracks after striking unconscious a big and heavy black-suited guy who had fallen on top of him. A train is fast approaching and Healer is furiously struggling to get the unconscious guy off of him. No luck. The passenger train speeds past. Healer and the big guy is nowhere to be seen for some moments. We then finally see Healer pop up unharmed (but not impressed). The mission is a success.

The first problem appears thirty minutes in. Healer’s client—revealed to be the CEO of Il Je Newspaper—is making Healer one of his next targets for elimination after he finds out that his identity has been made known to Healer. The other target is the middle-aged man who is being eliminated for knowing his identity. What follows is Healer being framed for murder of the middle-aged man and now on the Wanted’s list. From this, we realise Healer had been doing a job for the bad guys and those black-suited men chasing after Healer was working for a good guy, Kim Moon Ho (Yoo Ji Tae)—a star news reporter for ABS and younger brother of this Il Je Newspaper’s CEO. Kim Moon Ho is secretly working against his older brother.

This decade-old incident that the series builds its story around gets told through flashbacks. It begins with the flashbacks of Kim Moon Ho in Episode 1. We don’t get much detail at this point—only showing that the incident involved a group of people who seemed to have been on the road a lot and was broadcasting illegally. Bit by bit, the full story of that incident becomes clearer with more flashbacks throughout the series from different characters.

Into Episode 3, the lead characters are said to have some connection to Kim Moon Ho and Il Je Newspaper CEO: the female lead character, Chae Young Shin (Park Min Young), is the girl Kim Moon Ho has been trying to find for a while. Chae Young Shin is Kim Moon Ho’s sister-in-law’s daughter—someone who people in his circle believe died in an incident occurring after the decade-old incident. Chae Young Shin is unaware of her background as she has no memories before the time she got adopted by her father; and Healer, we are shown that he is connected to these people when Healer tells us that he has the same photo of a group of people as the one on a bedside table at the Il Je Newspaper CEO’s residence.

By the end of Episode 3, Healer is told by his partner in the shadows that he has been framed for murder and advised to stop his work immediately and go into hiding; however, Healer chooses to continue, reasoning that he still needs to fulfill his client’s (Kim Moon Ho’s) request. Here, we see Healer taking up an alter ego of scaredy cat Park Bong Soo and becomes Chae Young Shin’s assistant at Someday Daily—a low-rated entertainment news outlet on the Internet.

The setup in these first three episodes brings about the good old action plot of the powerful, corrupt and untouchable higher-ups with complete control of all resources that allows them to continue their illegal activities and continue getting away with murder. Meanwhile, the good guy constantly gets the finger pointed at him each time someone gets killed by this powerful, corrupt and untouchable group of higher-ups.

Amongst the action plot is a sweet romance plot between Chae Young Shin and Healer. We had worried about the major problem that was set up for the pairing. We had thought it could potentially bring in a period of melodrama and cause a slowing down of pace of the story, but it didn’t. This major problem for Chae Young Shin and Healer was Healer’s father being noted in police records as the killer of Chae Young Shin’s biological father. With this sort of problem, typically it would have seen Chae Young Shin become distant for a period of time. It would typically turn into a major plot point in the story. However, we see Chae Young Shin calm, rational and logical-minded. Chae Young Shin was initially distressed and wary of Healer’s proximity. She didn’t chase after Healer when he left hurt and distressed that there was nothing he could do to have Chae Young Shin believe what he believed. But then, we see Chae Young Shin chasing after Healer moments after he had left. She goes up to Healer and tells him to find that evidence he promised to find then come see her. Healer, of course, was happy for this chance she was giving him. Chae Young Shin then goes a step better: she tells him to come to her even without the evidence, before adding that she will help him and saying many other nice things to him. After these exchange of words, we see the pair happily back together and working together as a team. The resolution was quick, efficient and super sweet. We were spared from the melodrama thanks to such an awesome and lovable character that Chae Young Shin is!

Chae Young Shin is a female lead character we thoroughly enjoyed watching. She’s fun and easy-going as well as logical and sensible. She has an immense fear of violence and this sees her needing to take medicine to calm her down. With her job as a reporter as well as being around Healer, she can be fearless which has gotten her into some dangerous situations, but she never comes across as reckless. We see that she knows her weaknesses and limits; and we see this during the scene where Healer has to go rescue Kim Moon Ho who has been kidnapped. In that scene, Healer asked Chae Young Shin to choose to follow him or remain behind. Of course, Chae Young Shin smartly and sensibly chooses to remain behind and lets Healer do what he does best. We love this about Chae Young Shin.

Healer had a very good spy action story with a super sweet couple and entertaining and humorous supporting characters that made Healer one heck of a cool watch. We thoroughly enjoyed watching Healer and we recommend it for all the reasons above!