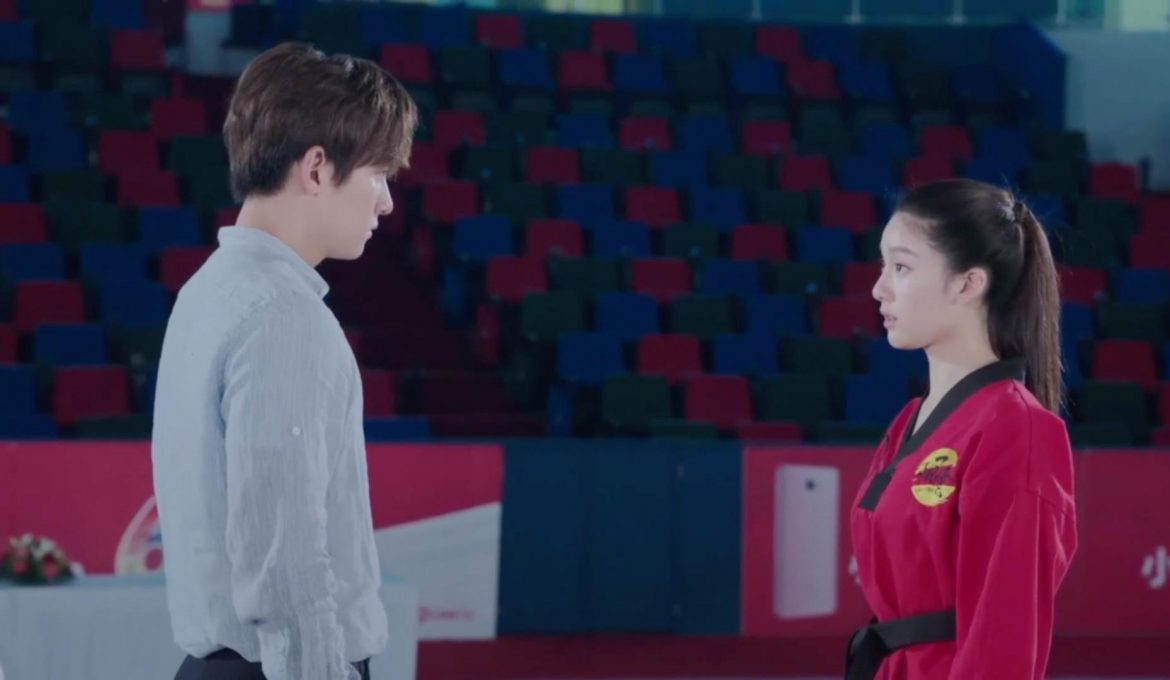 An easy chance to gain three points from Yin Xiu presents itself to Yang Rui when he by chance exposes Yin Xiu’s flat feet. Yang Rui had used a trick of sitting on the ground and stroking the shoe of the foot coming to deal him an attack. Yin Xiu snapped her foot away when he asked her where she got her pretty shoes from. Yin Xiu’s shoe remaining in Yang Rui’s possession, her foot was then left bare for everyone to see.

Yang Rui doesn’t manage to take that opportunity to gain an easy three points from Yin Xiu when he plays around. He waves a hand in front of her face then checks to see if she’s really miles into her thoughts with pulling a face at her. Yang Rui’s playing around gives Fang Ting Hao the time to bring Yin Xiu back to the present with calling her name. Yin Xiu deals Yang Rui a kick and he gets eliminated.

Lu Fei Yu heads up to fight Yin Xiu next. He returns Yin Xiu her shoe. She doesn’t accept the shoe. Instead, she takes off her other shoe and fights in bare feet. Though Lu Fei Yu is a stronger and more serious fighter, he doesn’t fare any better against Yin Xiu. He groans in pain on the ground from one powerful kick from Yin Xiu.

“I care. The person closest to me would rather send me far far away because I have flat feet. They didn’t care about how much I love Yuan Wu Dao. They didn’t care about me at all. I wanted so much to train with them. I hate them. I hate you all also. I must care about this. I want the hate to grow within my heart. Didn’t you and Chen Zhou tell me to hate those who ridicule and hinder me as much as I want? Only through hate can I surpass myself. Only hate can you become stronger. Isn’t that right, Drillmaster?”

Chang An says he was wrong at that time and she’s wrong now—even more so than he was. Finding the matter between Song Bai and Feng Yun needing to be dealt with today, Chang An says for Yin Xiu to resume the 45 Points contest with him.

Yin Xiu sends attack after attack towards Chang An and Chang An responds with dodging. Unimpressed, Yin Xiu asks Chang An if he’s regressed in skill after being with a group of good-for-nothings. The advice from Chang An’s doctor about keeping the injured leg from sustaining any violent activity is what’s bringing Chang An to dodge Yin Xiu’s attacks.

Chang An eliminates Yin Xiu with a light touch to her stomach. The attack Chang An eliminates Yin Xiu with is too unimpressive for her. Chang An says martial arts isn’t about harming others. Commenting on the hate she has, Chang An says it can dissipate with time and leniency regardless of how big the hate is. Yin Xiu dismisses Chang An’s words with saying she isn’t able to understand what he’s said. She demands him to bring out his full strength and fight with her seriously. Fang Ting Hao comes in and tells Yin Xiu it’s not possible for her to fight anymore. She’s lost already.

“Drillmaster Chang An, I don’t want to be fickle like you. For those who humiliate me, little by little, I’ll store it all in my heart. I’ll then throw it in their faces and make them regret.”

The contest resumes with the next Feng Yun opponent for Chang An to defeat. Lu Fei Yu continues to let out clues to the others about the serious state of Chang An’s injured leg. It doesn’t grab their full concern until Chang An shows the increasing effort he needs to put into defeating each subsequent Feng Yun opponent. Lu Fei Yu spits out what he knows about Chang An when Fan Xiao Ying makes him let them know what he knows about Chang An. When he does, they see Chang An shouldn’t be up there fighting.

Fang Ting Hao loses patience with Chang An’s private chat with Qi Bai Cao. He asks Chang An if he’s going to fight. In matches, there are breaks, Chang An says. He proceeds to the sidelines and continues his talk with Qi Bai Cao. He tells Qi Bai Cao off for her recklessness of running over here which could have brought her to get sick again. Qi Bai Cao says she’s recovered already. She asks Chang An to let her go up and fight instead. Chang An says no. He will hand all of the future matches to her to fight once she’s recovered. In the meantime, with this contest, he will go up and fight. Before returning to the fighting stage, Chang An tells his Song Bai gang to treat his fight in this contest with Feng Yun as a class on how to defeat them.

The contest resumes. Feng Yun opponents don’t hesitate to target Chang An’s injured leg when they get the opportunity to. Chang An’s response to those is simply snapping it back straight and continuing to fight. Chang An is managing well enough to defeat Feng Yun opponent after Feng Yun opponent. However, he’s showing more pain as each Feng Yun opponent target his injured leg. Three points away from 45 points, Qi Bai Cao wants Chang An to stop fighting. As Song Bai is only three points away, Chang An continues on. Charging towards his opponent, and with a kick with his injured leg towards the opponent, Chang An gets the three points and the win for Song Bai. Fan Xiao Ying proudly points out to Fang Ting Hao that Feng Yun has lost. She reminds him to have Feng Yun apologise. She’ll be calling over every Yuan Wu Dao hall to Song Bai to have them see the spectacle.

Fang Ting Hao go to Yin Xiu to return her shoes to her in the training room. He finds Yin Xiu letting her anger out with doing punching bag exercises.

Fang Ting Hao seems to hit the target when Yin Xiu is silent and sobbing.

“I envy you, actually. It’s good how you can go about hating as much as you like. I, on the other hand, have to turn love into hate and hate into love.”

Yin Xiu can see what love is and what hate is for Fang Ting Hao. Love is Qi Bai Cao. Hate is Feng Yun. Yin Xiu indicates there isn’t a need for Fang Ting Hao to be envious of her when unlike her where her world abandoned her it’s he who abandoned his world. There is one aspect they are the same in, however. They are lonely people.

The Song Bai gang is concerned about their chances of progressing in the competition even though their win in the contest with Feng Yun allows them to continue on. Their loss to Pu Hai has made it difficult for them to gain enough points to continue on even if they win all their future matches. Chang An doesn’t have that same thought of hopelessness as the Song Bai gang. The next competition against Long Shi suggests there is still hope. Song Bai wins all of their matches against Long Shi. With this result and Feng Yun not placing an external help for Pu Hai Song Bai comes back to being ahead of Pu Hai in points. The reason Feng Yun has not provided external help for Pu Hai this time is Yin Xiu finding fun in seeing Song Bai have hope then be in despair. She wants to let them understand what is called strong and what is called weak. She wants Song Bai to understand the wide gap in strength between them.

Fang Ting Hao finds Fang Ting Yi has left the hospital and has chosen to hide herself from him. She leaves only a letter behind for him to read. Fang Ting Yi’s letter again asks that he leave Feng Yun and return back to being his old self. She doesn’t want him to become so far gone in the wrong path that he doesn’t have the chance to regret and end up losing all the people who once cared about him.

It was hard to not be annoyed at Yang Rui for playing around when he had the chance to get points off of Yin Xiu. Song Bai desperately needed to win the contest to continue participating in the competition and what does Yang Rui do? He gives away the important chance to gain points with an unnecessary extra check on seeing how far gone Yin Xiu was into her thoughts. It’s like he’s not concerned about Song Bai being eliminated. He definitely deserves that painful kick from Yin Xiu for not striking when he had the chance to.