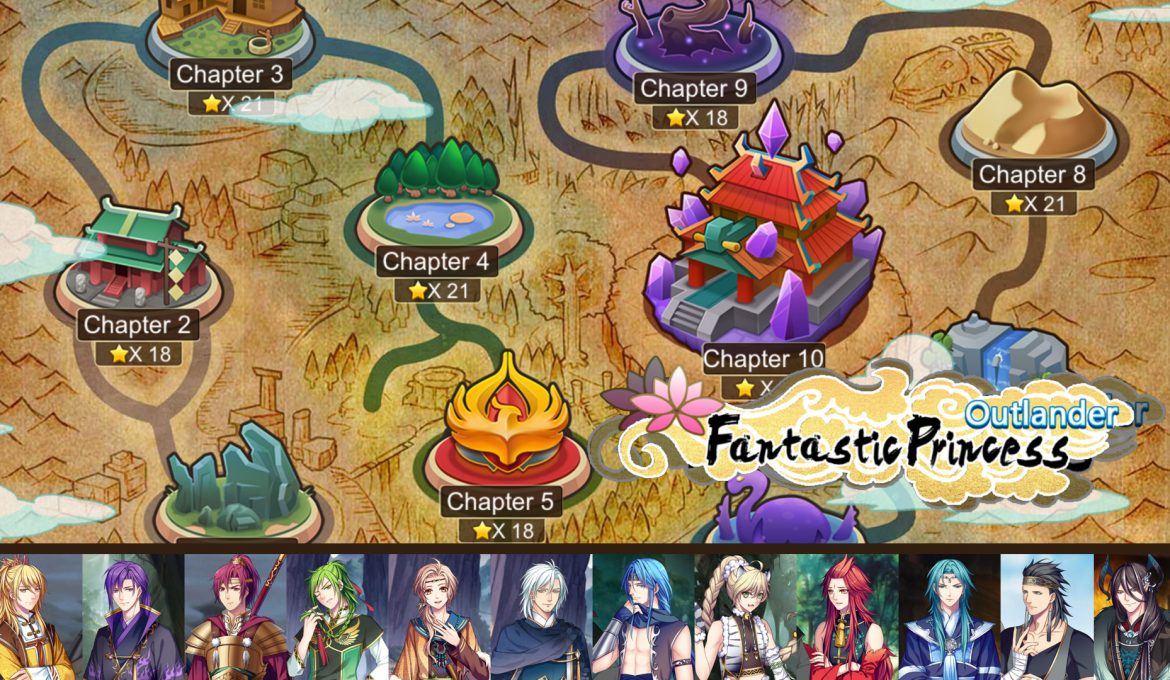 We’ve played a lot of these choose your own story game apps in the past. This one is a bit different in the way that it doesn’t have you choose a character to be your love interest at the start of the story. Rather, you are introduced to a character at a time throughout the story. As you play, you choose who you wish to give items to and make decisions on actions to take. This increases your relationship with the characters. This means you may continually be deciding who you want to build a close relationship with throughout the story. It may be a character that appears at the start of the story or one appearing later in the story.

The story of Outlander: Fantastic Princess begins with your character in the library. You fall asleep while reading a book on Southern Dynasty. Your spirit travels into a body of a princess in the Southern Dynasty. You find that there is an evil force bringing unrest to the land. You go on a journey with your group of companions, defeating enemies on the way, to find fragments of warm jade in order to seal Shadowmort and bring peace to the land.

A huge aspect of this choose your own path story game is battling enemies. Each stage in each chapter you have to win the battles in order to continue on reading the story.

When companions head into battle, their health goes down and requires replenishing. If it’s a very difficult battle, they may be injured and need healing.

Healing companions can be done through the game’s healing feature. Healing a companion is a simple game of pressing the dark-coloured spots that appear on the screen until the companion’s health reaches back to full health. Healing requires the in-game currency of coins. The amount of coins you need to heal a companion depends on how injured they are and the companion level they are at. We try not to get the companions to the point of needing healing, especially towards the end of the story. It gets quite expensive to heal them this way!

On the first read of the story, we used the strategy of keeping all companions in the lineup to be at a companion level close to the player level or exactly at player level and choosing companions with the highest attack and defense numbers. We also kept health at full or near full. We used it from the start of the game through to the end.

This strategy definitely wins battles, but it wasn’t easy progressing through the chapters this way. Keeping companions at player level and full health drained a lot of the coins we built up through daily logins, achievement rewards and those we won through winning battles. Going about the game this way had us spend quite some time waiting for the coins to build up again. Building up coins can be done by replaying the battles in each of the chapters or you can obtain coins by purchasing them with the rarer in-game currency of crystals. You can obtain crystals through daily logins or achieving achievements. Sometimes, we did choose to use crystals to buy more coins to upgrade the companions to win battles to continue on reading. It helped us progress through the story faster than waiting each day to receive free coins from daily logins.

What we gathered from this first read of the story is that enemies tend to direct attacks towards the strongest companions. If the companions all have health levels that are around the same as each other, the attacks got spread out between them.

We used this strategy with the lineup of Lancelot, Kirin, Yee and Storm for up to Chapter 4. It worked well for the battles with groups of bandits and creatures. However, battles that have the outcome of recruiting a companion full health is required for best chances of success. With recruiting Phoenix, it was quite difficult. We actually had to replay some of the battles in previous chapters or use some crystals to get more coins and increase player level so we could upgrade our companions to a companion level where the lineup could defeat Phoenix. Then, around Chapter 7 and onwards, even when the lineup included stronger companions like Tiger, Dragon and Phoenix, we found we couldn’t win battles with the strategy of upgrading some companions to player level. All had to be upgraded to player level and health had to be in green status range to defeat the enemies. We again had to replay battles of previous chapters to increase the player level to upgrade companions’ levels to be high enough to win battles.

This aspect of the game makes the game interesting as we try to work out which lineup is effective in the battles and how much upgrading of companions is required to successfully win battles.

There are other ways to increase your relationship with companions.

One way is during moments in the story where it asks you to make a decision. This could be asking you to choose a companion to accompany you or look after you whilst the other companions continue on in other tasks.

These moments you have with your companion gets stored in the ‘Scroll’ section of the game. This is at the screen when you head into the game.

Another way to increase a companion’s relationship level is by sending a gift to them. This can be done through the companion’s profile card with ‘Send a gift’ to the companion. The gift you send are the items you gain from battles, daily logins and achievement rewards. These are found in your ‘Bag’.

We guess this is the way to increase your relationship level with the companions that come in later in the story. There are two other items, Tea and Lucidum. It makes us very curious what they’re for…

The relationship level that the companion have to be at is 120 impressions. The reward for reaching this is a gift of an outfit that your avatar can wear. It’s nice to see our avatar given another outfit to change into. Though we’re curious to see what the outfits of the other companions look like, what we’d love to receive for achieving the goal is a side story for the companion. This is something we wish the game did as well. :o) :o).

The story in this choose your own path game isn’t something that will have you speedily progressing to the end of the story to find out what the end is. But, there are things that keeps you playing the game. Collecting moments with companions is one. These moments with companions that you come across in the story are then all stored in one place for us to revisit again. The place it’s stored in—Scroll—is a bit inconvenient, though. It’s at the screen before the main screen. So, you have to exit the game and re-enter the game to get into if you have already gone into the main screen. The outfits that you get for gaining 120 impressions for each companion is also something that can keep you playing as you try to obtain them all and see the design for each companion. And, of course, there’s the happy end moment for each companion that you gain for reaching 120 impressions for each character.