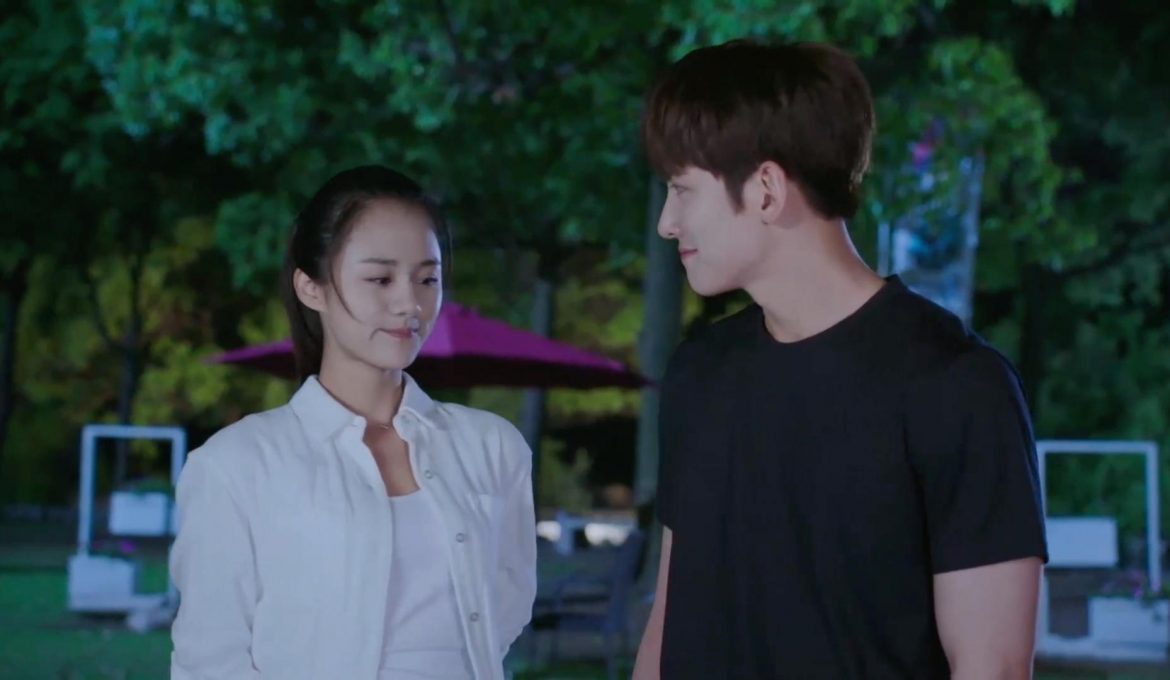 Chang An has been trying to ask Qi Bai Cao out, but he’s not had much success. When Qi Bai Cao enters the main training hall, he tries again. With Lu Fei Yu stuck around his leg, expressing how pained he is with not being able to chase after Fan Xiao Ying because Hu Yi Feng is his sworn brother but also likes Fan Xiao Ying, Chang An shakes him off then sends him off on a task of shifting punching bags to the other side of the room. He asks Qi Bai Cao if she has free time tomorrow. Just like an earlier occasion where asked, Qi Bai Cao wonders if it’s to give her additional training. She says she has to go to the bookstore with Qu Guang Ya in the morning; however, she can let her know about the additional training with him. Chang An says it’s not for training. He asks if she has time in the evening as well. Qi Bai Cao is free in the evening. Stll thinking it’s for additional training, Qi Bai Cao asks what training she’ll receive. Chang An answers this with saying he’ll keep it a secret and she’ll know later on.

Lu Fei Yu presents Chang An with his precious pamphlet on pursuing women. Chang An initially has no interest in it, but he takes it into his possession in the end. Lu Fei Yu sees himself to be an expert at chasing women. He says to Chang An he should make her feel the warmth and romance. He gives the idea of giving Qi Bai Cao a hundred roses and have her feel like she’s swimming in the sea of love and be unable to escape it. Seeing Chang An not reacting to the idea, Lu Fei Yu suggests the idea of giving Qi Bai Cao the things she likes to eat. He lists chocolates, bread, french fries, chips and Be&Cheery. Chang An notes that these are all Fan Xiao Ying’s favorites. Lu Fei Yu moves onto suggesting Chang An train Qi Bai Cao for an additional hour. He believes Qi Bai Cao will like that. Also, he feels that Qi Bai Cao will head over to him if Chang An so happens to hurt his leg. This can lead to something suggestive which Lu Fei Yu indicates with a cheeky laugh and shoulder shrugging. Chang An doesn’t listen to Lu Fei Yu anymore after this. Lu Fei Yu gets pushed out of Chang An’s place.

Chang An has the day planned out. The first outing is at a horse ranch where he and Qi Bai Cao go horse riding. Qi Bai Cao continues to think she’s come for training. When Qi Bai Cao asks if this is the training material, Chang An neither confirms it or denies it. He simply says they’re always training in the hall so changing the location to outside is sometimes good. He asks if Qi Bai Cao likes riding horses. Qi Bai Cao nods.

Guiding a horse, Chang An heads to Qi Bai Cao who’s waiting for him in the fields. Qi Bai Cao finds Chang An very handsome in the horse riding outfit he changed into. Chang An finds Qi Bai Cao looking pretty good in her riding outfit, too. Taking a leisurely walk, with Qi Bai Cao asking Chang An if he rode horses often, Chang An tells Qi Bai Cao how he liked cowboys a lot for a period of time when he was small. It slowly brought him to like riding horses and he spent one or two days a week at a horse ranch. He liked the exciting and exhilarating speed at which the horses galloped. He adds that even though it was exhilarating riding horses, he often rode by himself so it was very lonesome. Often, he thought how if one day he could ride a horse with the girl he loves it’d be much nicer.

Chang An asks Qi Bai Cao if he can teach her how to ride a horse. She wants to learn, but says she’s a little clumsy. Chang An doesn’t think Qi Bai Cao will have trouble learning to ride a horse when she has good coordination.

“You’re suffering. I know a secret. As long as this secret gets told, Chang An can’t continue to stay by Qi Bai Cao’s side.”

“A case. A case which Chang An always carries with him.”

The appearance of Fang Ting Hao and Yin Xiu has Chang An feign a stomachache from hunger to have Qi Bai Cao focus back onto their outing together and forget Fang Ting Hao and seeing him unhappy with the two of them together.

Chang An goes on to letting Qi Bai Cao know of the first impression she gave him. She was cute and kind-hearted. This didn’t make him pay too much attention to her, though. Their second encounter at the Pretty Girl Challenge competition where he found her crying had. This second encounter with her was one Chang An hadn’t expected, but he tells Qi Bai Cao her tears at that time had touched the depths of his heart. It affected him in a way that his heart couldn’t let her go and may be the reason he chose to remain at Song Bai.

Lu Fei Yu, Fan Xiao Ying and Qu Guang Ya had been secretly following Qi Bai Cao and Chang An since their time at the horse ranch. They take action when they see Qi Bai Cao’s expression indicate a rejection. Lu Fei Yu shows up at their table as a waiter with a mask shielding his identity. He informs the two of the restaurant having a special event for couples. As a waitress and wearing a mask also, Qu Guang Ya enters and presents Qi Bai Cao and Chang An a pink heart-shaped cake. Qi Bai Cao says they aren’t a couple. Qu Guang Ya says they may not be now, but they will be and tells her she must seize the opportunity with the handsome and charming gentleman. Qu Guang Ya wishes them both to have a relationship that’s smooth sailings and sweet. Fan Xiao Ying and Lu Fei Yu joins Qu Guang Ya in singing them a romantic song. They don’t manage to finish singing it when Qi Bai Cao makes them scurry away after they’re found out by her.

Qi Bai Cao feels the day has been a chaotic one as she and Chang An make their way back into Song Bai. Chang An still has one more thing planned for the day. He’s prepared a slideshow of drawings of past moments with Qi Bai Cao on a display screen set up on the grounds of Song Bai. It’s accompanied with a bicycle in front and a scattering of pink confetti decorating a pink heart on the ground.

Qi Bai Cao sees the slideshow showing their first encounter in the bus and the time they worked on an ice carving together. There’s also a drawing of the time she gave him a ride on her bicycle to bring him back to Song Bai because he’s a family member to her and the others. Chang An captions the drawing with saying he wished time would stop. There’s a drawing of the time he watched her let go of the pain she felt over Ruo Bai’s death. He captions this drawing with saying his heart hurts when she cries. A drawing representing the time she disappeared from them all to be by herself at the waterfront is captioned with him being scared of not being there by her side when she’s sad. After a drawing of the time Chang An kissed Qi Bai Cao’s forehead, Chang An lets Qi Bai Cao know his thoughts and his feelings towards her.

“Do you know what day it is today? It’s a whole two years from the day we met each other. Two years ago on this day it was a truly wonderful day. That day I met you, you were cute, kind-hearted, fragile but also incomparably strong. I originally was going to train you to be a freak who only knows to compete in Yuan Wu Dao competitions. However, I didn’t expect you to slowly change me with your warmth. I don’t know when I started wanting to stay by your side. Whether it was to see your smile or it was silently watching you have a difficult time in the background, I like training with you in Yuan Wu Dao, watching you win match after match and overcoming issues with you. Maybe it’s unconsciously day by day or it started from when I first met you. Bai Cao, I love you. I want to keep being with you. Can I keep being with you?”

The Song Bai gang appear before them. They ask Qi Bai Cao to accept Chang An. Chang An never receives an answer from Qi Bai Cao when the moment gets interrupted by a call from Fang Ting Yi to Qi Bai Cao.

Fang Ting Yi calls Qi Bai Cao for her help in talking to Fang Ting Hao with his reason for joining Feng Yun. When Qi Bai Cao manages to get in contact with him outside his office, he’s not particularly interested in having a talk with her. He’s rather unhappy that she has come to see him only because Fang Ting Yi asked her to and not because she wanted to. Qi Bai Cao tries to say that it’s the case with telling him she stayed away because he said he hated her for injuring Fang Ting YI and wished not to see her ever again. Seeing Qi Bai Cao has repeated his words well, Fang Ting Hao tries to send her off with it again. However, Qi Bai Cao’s persistence with her want for him to give her some of his time to have a good talk, he agrees to give some of his time to her. She must, however, hop in his car and go somewhere with him.

A whole episode dedicated to seeing Chang An on a date with Qi Bai Cao. Unfortunately, again, Qi Bai Cao is clueless. Every time Chang An asks her if she has time, her immediate reply is asking if it’s because he wants to give her additional training. We’re wondering if it’s because she just constantly is thinking about Yuan Wu Dao so nothing but Yuan Wu Dao goes through her mind or she is consciously choosing to respond like that every time he asks her because she is sending him a message of that she only sees him as her instructor. *sigh*

When Chang An asks if he can teach Qi Bai Cao to ride a horse, it came after him expressing how he was lonely riding a horse by himself even when he found it exhilarating and wished one day he could ride with the one he loves. Reading deeper into that, it’s Chang An letting Qi Bai Cao know she is that person he speaks of. He’s brought her here to a horse ranch… to go horse riding… together with her… Qi Bai Cao didn’t notice the subtle hint.