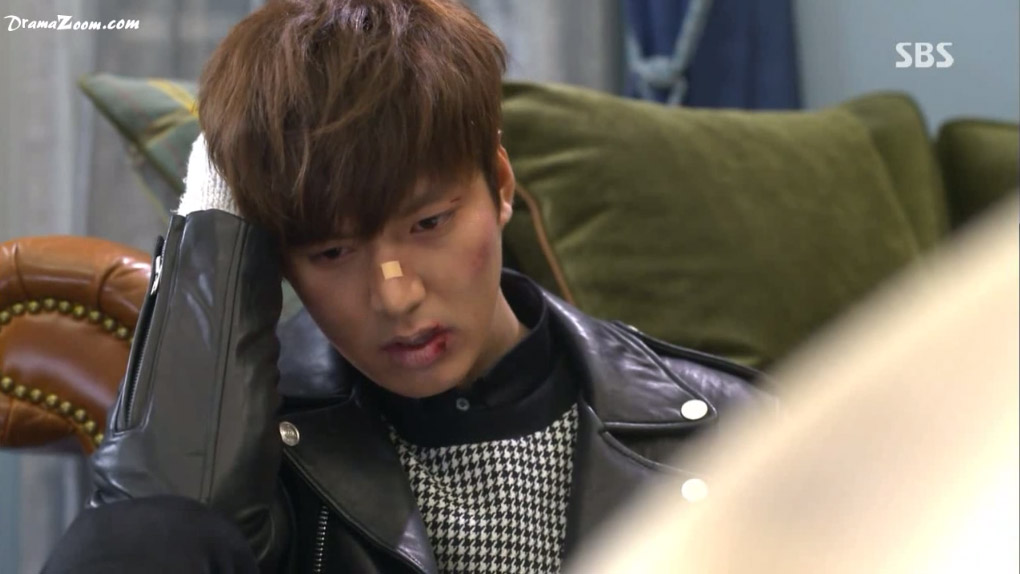 There was a lot of angst in these episodes. Cha Eun Sang is still in Korea, but with her being on Kim Nam Yoon‘s incessant surveillance, Kim Tan decides he can no longer risk ruining her life more than he has. Separated from her, he breaks down: he gets into fights and skips class; he tells Kim Won that he can have all of his shares and pleads to be sent to America, the place he hates so much; he tells Choi Young Do that he can have her. However, seeing her in Seoul again has him realise that he still cannot give her up.

Kim Won helps Kim Tan with Cha Eun Sang—as per their deal made previously (and possibly out of concern for Kim Tan as well). He convinces her to return under the pretense of wanting to take the school exams in order to be near Kim Tan, deciding to face her obstacles head on rather than run. (She will continue to make up excuses in order to stay with him.)

An attempt to send Kim Tan‘s mother, Han Ki Ae, to America after she announces her desire to leave the house and break up with his father sees Kim Tan walk out on his father as well. He tells Kim Nam Yoon that he will no longer acknowledge himself as part of his family, only his mother’s from this point on.

Kim Nam Yoon‘s failure to control and tame his sons (and pretty much everyone around him) thus far does not stop him from yet another attempt. A big party is planned for Kim Tan‘s 18th birthday where Kim Tan‘s classmates are invited as well as the media. He will make Kim Tan (and Kim Won) come (and bow down?) before him.

Kim Tan and Cha Eun Sang reunited and with the resolution to stay together have other plans apparently. They turn up at the event in front of the flashing cameras, ready to take on Kim Tan‘s father.

As much angst as there was in these episodes, it was a great setting for developing the Kim Tan and Kim Won relationship. It was nice to see that Kim Won isn’t so dead set on having Kim Tan sent to America anymore after witnessing Kim Tan‘s fall. Instead of saying he wants or not want him off to America, he just tells him to study and get good grades. He appears to be taking his own advice he gave to Cha Eun Sang: since he wasn’t sure what he was going to do about Kim Tan, he’s thinking about immediate wants rather than long-term ones.

Choi Young Do. All credit to the writers for creating such an awesome second male lead (as well as to Kim Woo Bin for bringing the character alive) and for giving him such a dignified end to his part in the story. He saves Kim Tan from losing his mother the way he lost his mother all those years ago, confirming the heart the character was shown briefly to have in previous episodes. He was also afforded some control over the future of the relationship he and Cha Eun Sang is to have. As a potential boyfriend, Choi Young Do has already been rejected by Cha Eun Sang; but she didn’t reject him as a friend—she still wants to be his friend. However, he does not. He requests them to never see each other again; but should they happen to meet again, they not share any pleasantries: no hellos, no ‘how are you?’ and no reminiscing about these times. He tells her that he’ll forever see her as a woman (i.e. someone he likes) and nothing else. He does not keep friends and he wants to cut all ties with her.

We would have liked Choi Young Do and Cha Eun Sang to be friends, but we do like the way it turned out. Somehow it fits his character very much.

Though we believe this may be the end for Choi Young Do‘s story, we hope there is just a little more to add to his story. Whilst sitting at the noodle restaurant he and Cha Eun Sang went to, he spotted a message from his mother, “How are you, Choi Young Do?” it said. Maybe she will turn up. But if not, if these episodes contains his last major role in the story, we’re pretty satisfied. He let go of Cha Eun Sang in a dignified way; he righted the wrong of the past by helping Kim Tan with his mother; he was even allowed to show up in front of Cha Eun Sang at her new place first; and he met Cha Eun Sang‘s mother, Park Hee Nam, on another visit to her place where he enjoyed a home-cooked meal with Park Hee Nam: knowing how meaningful the situation is for him, it was heartwarming. Choi Young Do had a good run. A lot of attention had been paid to his side of the story. It’s a very good conclusion to his story if it is to be the end. We like it a lot.

So far, The Heirs really has done a fantastic job with the characters. There were so many of them and they managed to get us acquainted and connected with them all and have them fit into the main story so well. We can’t wait to see how the last two episodes ties the entire series up. The wait won’t be long since it’s already available. Yay!