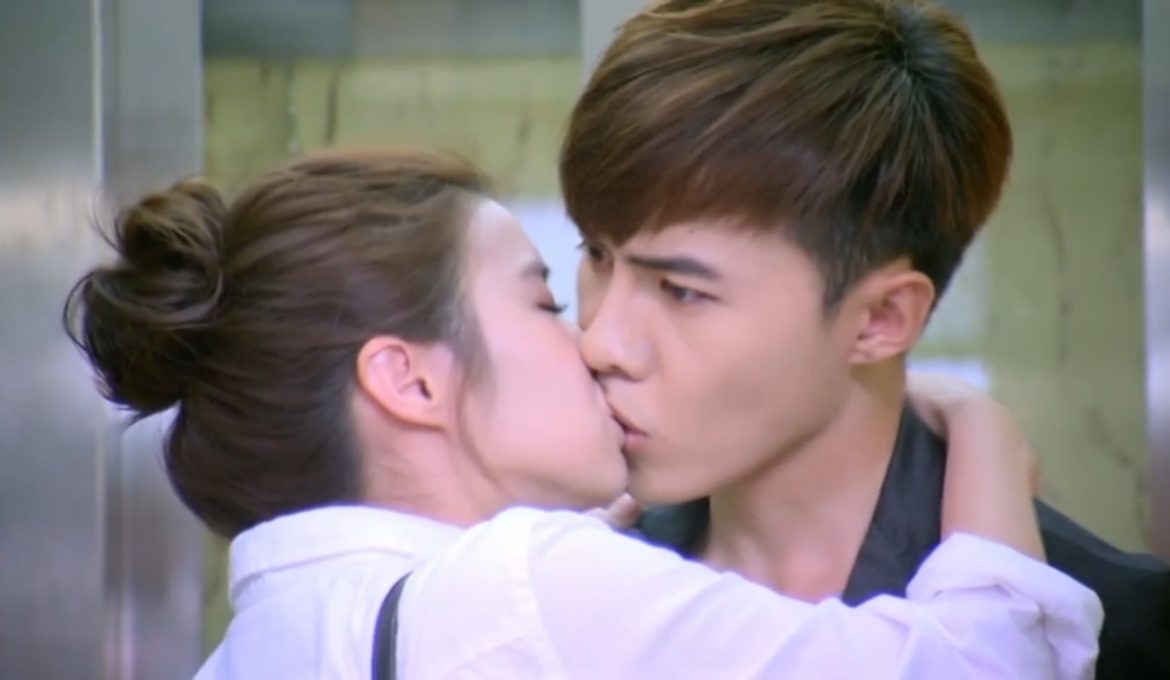 We always thought that Murphy’s Law of Love was a 20-episode series. We read somewhere that it might be a 21-episode series. It turns out it’s neither. Murphy’s Law of Love is only a 19-episode series. We know that Taiwanese series can vary in length, but generally, dramas like Murphy’s Law of Love are around 20 episodes, so did it get cut short? Maybe, maybe not. Are we sad about it? No, not really. Had it gone on to try and fill one more episode or two, we imagine we’d see more scenes where Guan Xiao Tong continues to be stubborn with her decision to start anew without Ji Jia Wei all the while clearly wanting to be with him, but is afraid of what might come in the future. The theme of Guan Xiao Tong being unsure, hesitant and stubborn is definitely what continues through the first half of Episode 19 before finally she acknowledges her regret of breaking up with Ji Jia Wei and chases after him.

As hinted in last week’s episode, Ji Jia Wei makes the decision to leave for Hong Kong to take over his father’s company there. Before he leaves, he takes on one last account: one which has his friends Ah Da and Xiao Ling divorce on good terms. He tells his colleagues that after carrying out this ceremony, he would leave for Hong Kong.

This kind of scene, usually we’d be happy to see take place. On this occasion though, we were happier thinking the scene was going to have He Zhi Yu walk down the aisle with Ji Jia Wei. It’s not that we ship He Zhi Yu and Ji Jia Wei (although, they come off a better pairing). It’s that we’ve had enough of seeing Guan Xiao Tong hesitate and overthink things around Ji Jia Wei. A simple action of lending her his arm so they can practise walking down the aisle causes her to think twice about linking arms with his. When Ji Jia Wei makes a comment about walking down the aisle together with her, saying “so walking the red carpet (aisle) feels like this”, Guan Xiao Tong seems to feel the need to add how the footsteps of the two people walking the red carpet/aisle must have the same rhythm in order to make it to the end. As true as it may be in a literal sense, it feels so much like Guan Xiao Tong‘s making a comment about how their steps in life don’t match and therefore shouldn’t be together. Guan Xiao Tong is definitely trying to find every reason and use anything she can to explain why she and Ji Jia Wei can’t be together.

The divorce ceremony does get Guan Xiao Tong thinking about her relationship with Ji Jia Wei, though. In the ceremony, Ah Da talks about life having ups and downs and that even though the outcome is not what he expected, he has no regrets about their time together. He tells her that he will remain by her side even if they are no longer husband and wife in name. (These words could easily have come straight from Ji Jia Wei‘s mouth for Guan Xiao Tong to hear we think.) Ah Da then ends with the answer to the question Guan Xiao Tong posed about how he envisions the future five to ten years down the road: his answer, “I’ll see it when it happens”. He talks about how life should not be lived thinking about what might come in the future, but lived in the present. This leads Guan Xiao Tong to later ask Ji Jia Wei a question seemingly relating to their relationship—she starts to anyway before he is called away to take a call. (We never hear exactly what the question is so when we say the question seemingly relates to their relationship, it’s inferred from the conversation they were having regarding Ah Da and Xiao Ling, genuine love and having loved bravely.) The short time Ji Jia Wei is away, it seems, is also too long for Guan Xiao Tong to stay around and finish her question.

Guan Xiao Tong is being hesitant and cowardly again. How could she just leave like that? She’s become quite a dramatic character over the last few episodes. But this isn’t the worst of it. When she first finds out that Ji Jia Wei is leaving (we don’t actually see how she finds out, we just hear that she knows), she doesn’t go to him either. She doesn’t attend his farewell party. When it’s time for Ji Jia Wei to leave for the airport, she’s nowhere near him. Where is she? She’s with Xiang Zi Yan learning to face her fear of the water by learning to surf. It’s only when Xiang Zi Yan calls her up on her cowardice and getting her to name her one regret in life—should she be swept up by a wave at that moment—does Guan Xiao Tong realise she wants to be together with Ji Jia Wei.

Recognising this, the dramatic chase to the airport begins. Guan Xiao Tong tries to call him on the phone to stop him from leaving to Hong Kong only to be met with an engaged tone. She rushes to his apartment to find it cleared out, Ji Jia Wei nowhere in sight. Desperately, she leaves almost a dozen voice messages on his phone after not getting through to him. She wants him to call her. She wants him to wait for her. She has something to tell him. She wants him to choose not to leave. Ji Jia Wei does end up leaving, but it’s after Guan Xiao Tong successfully catches up with him. She tells him she loves him. They kiss. He then leaves for Hong Kong and they have a long-distance kind of relationship, video-chatting each other, texting each other. Ji Jia Wei does come back for three days and they spend it wasting not a single moment before the episodes ends with one last kiss between the two and we’re presented the end credits.

Finally, Guan Xiao Tong overcomes her fear and musters up the courage to go after Ji Jia Wei, no longer fearing what might happen in the future and we get our happy ending. This happy ending, we found quite lacklustre, though. It’s not because it uses regret and the typical chase to the airport scene to bring these two together. This kind of reunion would be fine if we thought that Guan Xiao Tong should catch up with Ji Jia Wei.

With all the cowardly actions and the overthinking that Guan Xiao Tong did from Episode 16 to Episode 18, we hoped for a happy ending because romance dramas should end with the main couple getting together in the end, but secretly we were supporting an ending where Guan Xiao Tong doesn’t end up getting back with Ji Jia Wei because of how badly she’s been handling her relationship with him. When she left Ji Jia Wei midway through her question at the divorce ceremony and then chose to hide out at the beach with Xiang Zi Yan (instead of being where Ji Jia Wei is and confidently sending him off like she appears to want), we were very happy supporting an ending where she doesn’t end up getting back Ji Jia Wei. In fact, an ending where she misses her chance to bring him back to her side feels like a more natural ending. But then that would encourage her to think she actually lives a Murphy’s life instead of seeing that it’s her lack of courage to see things through that stops her from getting what, to where and who she wants. If the series were to continue on, we might see her use the missed opportunity as an excuse to continue bailing out of things in life and not believe in perseverance as a way of getting what she wants most. It would make Ji Jia Wei‘s words untrue. So, it’s better that the ending didn’t have her miss Ji Jia Wei because we want Ji Jia Wei to be right: persevering does get you what you want in the end. :oP :oP.

The series as a whole, it was a good, fun watch at the beginning. It started off well. We loved the Ji Jia Wei character (and still do) for his 100% honesty policy with everything. We also loved Guan Xiao Tong‘s understanding, selfless and insightful nature which featured for two-thirds of the series. It was so refreshing not to have the typical drama in the story where the past love He Zhi Yu comes in between Ji Jia Wei and Guan Xiao Tong. Then we get to Episode 16 where the break-up happens and Guan Xiao Tong starts becoming hesitant and acting much too cowardly (to the point of making us go from rooting for Guan Xiao Tong to not liking the character all that much). After this point, the series never really managed to pick itself back up for us. The last three episodes really brought down the enjoyment of the series a lot: during these last few episodes we only stayed on to watch for the sake of finishing the series. Definitely, had the series decided to carry on for another episode or two, it definitely would have tested our will not to skip scenes—that is if we decide to complete the series. Stopping at Episode 19 was a good move. It’s such a shame the last stretch of the series couldn’t end off as well as we think it began.