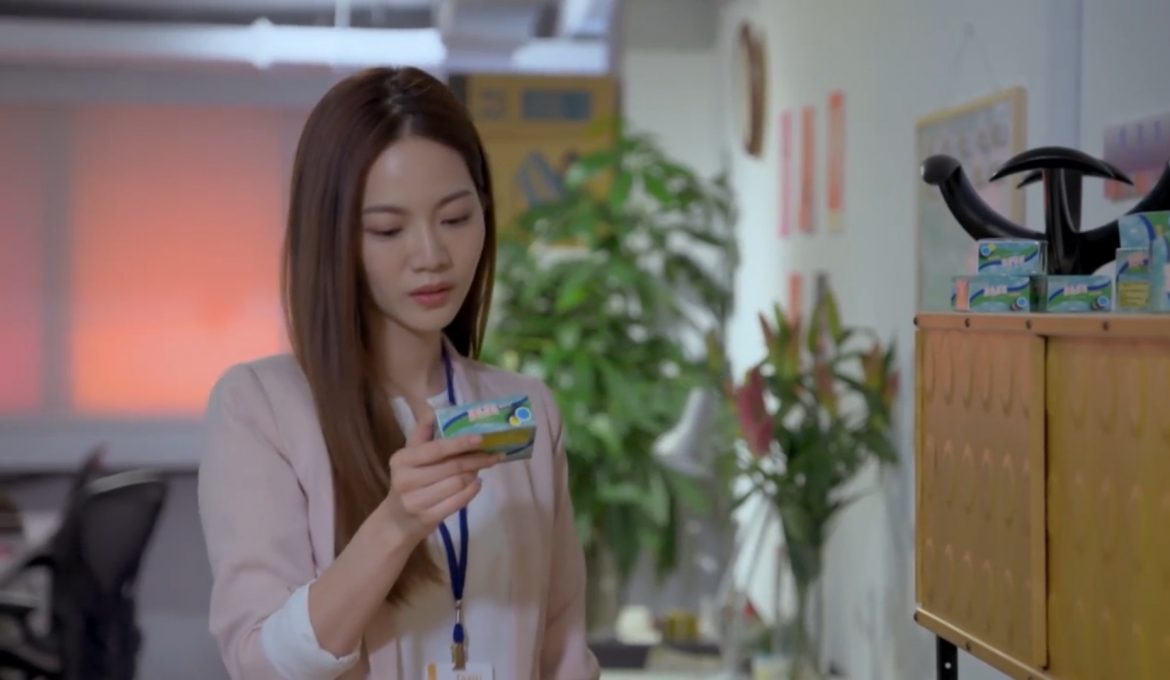 Zhong Yu Tang wants to prove she can be a competent salesperson after the transfer to Sales Team 3. But, she only finds herself bringing back a report of Sales Team 3’s largest client wishing to terminate their contract for their classic brand, Mei Mei.

Before the meeting with their client, Di Shi Kang, Zhong Yu Tang looks to see where the product is displayed in their store. Looking and asking around, she comes to find their Mei Mei products displayed in a low traffic location near the fire exit and on the lowest of the lowest shelf where eyes do not catch sight of the product. She takes it upon herself to move every box of Mei Mei to a shelf around the corner at eye-level.

Zhong Yu Tang doesn’t find this as indication of Mei Mei performing poorly in the store. She is surprised when Di Shi Kang’s manager wishes to take it off the shelf and terminate the contract with them. “But it’s a classic of a classic brand!” Zhong Yu Tang says to him. Unfortunately, the manager doesn’t care one bit for the product in their store. He tells her he has another meeting and for her to head out.

Zhong Yu Tang’s want to do well in this contract with Di Shi Kang is not only to prove she can be a great salesperson. It seems Mei Mei also has a special meaning for her. A flashback scene following and whilst Zhong Yu Tang walked back to the office deflated, we find out that back in her childhood days, Mei Mei was done Zhong Yu Tang liked a lot and her mother made Zhong Yu Tang promise to work in Mei Mei when she grew up.

Zhong Yu Tang is part of a group of highly skilled people who needs to utilise their skill and reach their potential.

The transfer to the sales department to the under-performing Sales Team 3, Zhong Yu Tang feels it’s a 10-year-grudge Ji Wen Kai is holding and he’s getting back at her.

And Ji Wen Kai plays one more time. He decides to have everyone have an incredibly expensive dish when he accepts the invitation from Zhong Yu Tang’s dad to join him, his daughter and his son to celebrate Zhong Yu Tang’s new position at a high class restaurant, knowing the outing was Zhong Yu Tang’s shout.

Ji Wen Kai’s actions seems to pay back Zhong Yu Tang for all the playing around she did in the past; but, it seems it’s got good intentions behind it. Ji Wen Kai reveals he isn’t teasing Zhong Yu Tang when he transferred her to Sales Team 3. It is to have her reach her potential. “You are destined to stand at the top of this incohesive organisation,” he says. “But I’m very curious, how long can you keep it up? If there are no problems, your abilities are strong. But if there are problems…”

The announcement Ji Wen Kai makes to Sales Team 3 has little impact. After Ji Wen Kai and Miao Ai Sha leaves the room, Meng He, who was giving out a plan of attack, stops and breathes a sigh of relief. The Sales Team 3 resume as normal—thinking about what to eat and concerned over their child. It’s not until later on when it’s almost home time and when Zhong Yu Tang shouts out the termination of contract for Mei Mei, that gets the attention of her Sales Team 3 team members. Mei Mei is the team’s biggest client and they remain for a moment, concerned that this loss of contract will severely cut their team’s performance that will see the team gone. Huang Jia Yin—the salesperson who is in charge of the Mei Mei product—immediately gives a call to the nanny looking after her son to ask her to watch her son a little longer.

But, after a while, one by one, Sale Team 3 heads home. Huang Jia Yin is the last to give up. She gives up when she isn’t able to contact the nanny and her worry that something is wrong takes over her concern for the contract they lost. Huang Jia Yin apologises to Zhong Yu Tang. She tells Zhong Yu Tang she will take care of the case the next day. Zhong Yu Tang tries to bring Huang Jia Yin and the others back to stay behind and discuss the situation with their Mei Mei product, but they continue leaving.

Miao Ai Sha sees the scene where Zhong Yu Tang attempts to stop Huang Jia Yin from getting off work and going home. She enters to attempt to get some sense into Huang Jia Yin: a cut in Sale Team 3 and loss of employment for her means no ability to hire a nanny to look after her child. Miao Ai Sha tells Huang Jia Yin a likely scenario where her ways may see her struggling to take care of her child because her only choice of supporting herself and her son might be setting up a night market stall where she works with her child in hand. This gets Huang Jia Yin to stop and think for a bit until a call comes through and she is informed that her young son is in the emergency room for high fever. Miao Ai Sha has no choice but allow Huang Jia Yin leave. Zhong Yu Tang offers to accompany her there. Ji Wen Kai watches all of what was taking place a level above.

This episode was another great one. We are loving the humour. It actually reminds us of Office Girls (very popular 2011 Taiwanese drama, starring Roy Chiu and Alice Ke). That subtle and quirky humour like in the scene where Ji Wen Kai and Miao Ai Sha walks as they discuss down the corridor after visiting Sales Team 3, a ladder left there had both Ji Wen Kai and Miao Ai Sha both turn to the side and slide through till they got through and resumed normally—it was so funny! We’d imagine if the scene was a normal one, Miao Ai Sha would gesture Ji Wen Kai to go first and she’d follow. The other scene was when Zhong Yu Tang brought Chen You Rui out to have a talk with him after he was introduced to the sales team. When Zhong Yu Tang was telling Chen You Rui off for saying he was her boyfriend, the scene suddenly brightened up for a moment before going back to being dim. The camera dead pans. Funny!

The scene where Ji Wen Kai drives by announcing Zhong Yu Tang gets transferred to the sales department, we love when he said, “Bu wan le (I’m not playing anymore).” The way he said it was so cute! :oP :oP.

Ji Wen Kai looks to not have any sort of like towards the friend now, though. Zhong Yu Tang is looking more like the one he has a chance of liking! He’s doing all these not so nice things for her success.

Ji Wen Kai is always observing Zhong Yu Tang from afar. What is he thinking in his head? What’s the plan for the story? We can’t see the direction yet. We’re just seeing that Yours and Mei Mei are what’s driving the character and relationship developments and it will be the thing to get Zhong Yu Tang and the Sales Team 3 in shape.

We thought Zhong Yu Tang was going to be a team leader to her oddball colleagues in the last episode. But, Zhong Yu Tang is looking like someone who’s there to get the under-performing team to try harder.

We’ll see how all develops. Episode 2 was great and we’re looking forward to seeing the next episode!