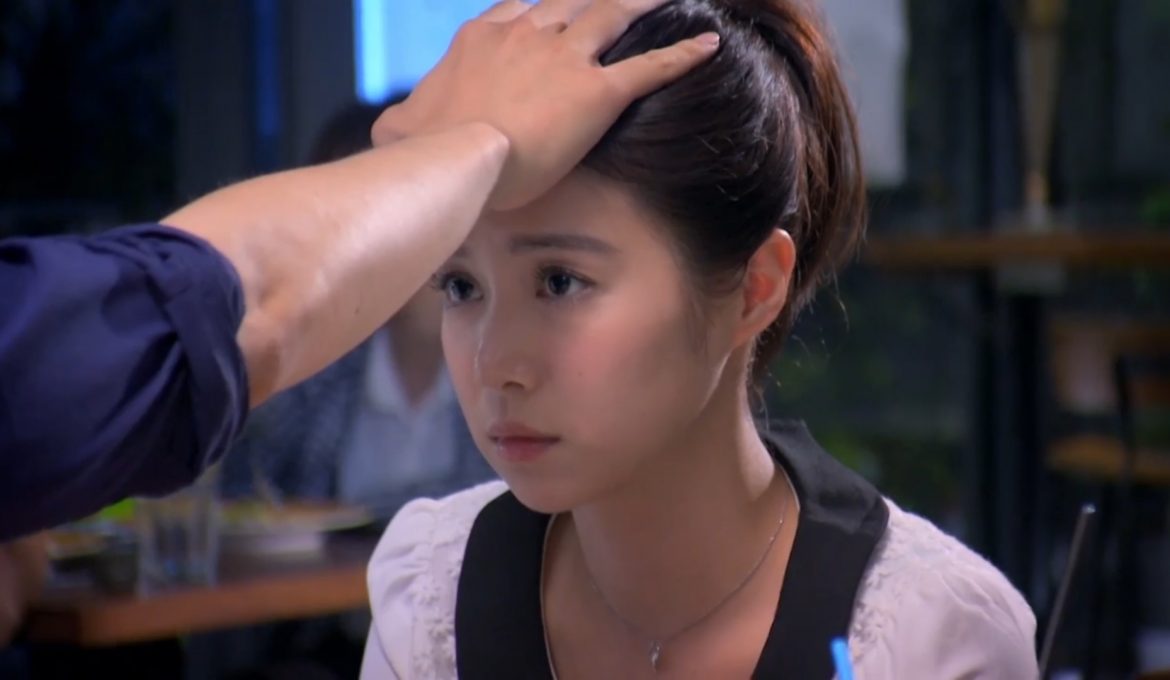 Finally in Episode 10, we find out what happened a year ago with Ji Jia Wei‘s ex, He Zhi Yu. She did indeed injure herself after the car accident and spent a long, tough year in rehabilitation, recovering from facial injuries and had to learn to walk as well. She has a valid reason for her disappearance. But because she didn’t want to use emotions/sympathy to get Ji Jia Wei back, she chose not to tell Ji Jia Wei about it when he finally gives her the opportunity to explain herself and clear the misunderstanding between them. During their meeting, all she does is reminisce the old days before apologising for disappearing on him. She allows him to continue misunderstanding.

The following scene, we learn that the doctor who’s been treating and looking after her is Guan Xiao Tong‘s ex, Du Kai Wen (Vince Kao)! It seems the last year she’s been confiding in Du Kai Wen about her injuries as well as Ji Jia Wei. We see them talk confortably about an additional reason she didn’t tell Ji Jia Wei about the accident: she expected him to wait for her, to believe in her and know her enough to not misunderstand the situation.

The first reason of not wanting to use sympathy to get Ji Jia Wei back, we suppose, is noble, but the second reason of expecting him to understand after disappearing for a year we find a little presumptuous. Before she got into the car accident, she didn’t want to discuss marriage because of her career aspirations. How she didn’t think that her disappearance would cause Ji Jia Wei to misunderstand her is beyond us. Not only that, now that she knows that he did not take her disappearance well and it took multiple tries before Ji Jia Wei was willing to sit down and hear her out, one would expect that she’d tell him she was on her way to meet him at the restaurant he arranged to meet a year ago, but got into a car accident and for the last year was undergoing rehabilitation.

So despite the meeting, the situation between Ji Jia Wei and He Zhi Yu hasn’t truly been cleared. The misunderstanding still exists. We have a feeling the direction of the story might not be so much to create drama where Ji Jia Wei sways between Guan Xiao Tong and He Zhi Yu. There might still be a possibility of that happening, but the focus might be on a smaller scale in comparison to say seeing Guan Xiao Tong open up, have self-confidence and trusting Ji Jia Wei.

Ji Jia Wei‘s been very honest about his feelings as well as the meetings with He Zhi Yu. When Ji Jia Wei went away on a week long business trip and coincidentally met He Zhi Yu at the hotel he and his team were also staying, he made good on a promise he made earlier to speak from the heart and not hide anything from her, telling her that He Zhi Yu was also staying where he happened to stay. He tells her that he was thinking of not telling her because he didn’t want her to worry, but decided he wanted to have her know and understand each other more. He assures her that he will return to her very soon.

In a scene where Ji Jia Wei is called to the hospital after a friend received bad news and was admitted, she arrives to see a scene between him and He Zhi Yu (who was also called about the news) talking civilly and reminiscing about the past. (Guan Xiao Tong had visited the hospital to bring Ji Jia Wei food, having left without eating the breakfast the two had made together.) She decides against making her presence known and walks off, visibly affected, before going off to a restaurant to placate her feelings with dishes and dishes of food. When Ji Jia Wei finds her and calls her up on her visit and questions why she left without making an appearance, she tells him that she saw that he and He Zhi Yu looked to be busily talking and she didn’t want to interrupt. She also makes the excuse that she only brought enough food for him and not the both of them so she didn’t want to head in.

It really looks like maybe the drama won’t come from Ji Jia Wei and his misunderstanding of He Zhi Yu. As more of the story plays out, it looks like drama might come from Guan Xiao Tong. With her ex coming into the picture, anything could happen. Du Kai Wen could serve as a reminder to Guan Xiao Tong that she and Ji Jia Wei are from different worlds and he’s better suited to He Zhi Yu. Du Kai Wen could be the one to reveal He Zhi Yu‘s car accident, the hardship she experienced and her desire to get back together with Ji Jia Wei; Guan Xiao Tong feeling sympathy and like she stood between their happiness, she might take herself out. Going back to this reassurance from Ji Jia Wei that he will return to her soon, it might indicate the opposite. When characters in dramas say “I will be back soon” during a scene where they’re apart from the one they’re supposed to be with and near the one they’re not supposed to be near, it’s like a warning that they won’t and drama will ensue! Ji Jia Wei is on a week-long business trip with He Zhi Yu nearby: why make it a week-long if the writer is not going to use it to cause some drama? It didn’t help that the episode faded to black right after he said it. Hmm…

For now though, Ji Jia Wei is making a lot of progress with Guan Xiao Tong. Like previous episodes, there were lots of nice Guan Xiao Tong and Ji Jia Wei moments. The series really doesn’t like to disappoint the audience, consistently giving us lots of cool couply Guan Xiao Tong and Ji Jia Wei scenes. There was an almost kiss, too, only to be interrupted by Ji Jia Wei‘s cute dog, Polo (again)—to Ji Jia Wei‘s disappointment. Guan Xiao Tong finally tells Ji Jia Wei that she misses him. In the last couple of episodes, he’s been trying to get her to say it to him like a girlfriend does to her boyfriend (even though they’re not officially such yet), but couldn’t get it out of her. In Episode 10, she says it all of a sudden, out of her own will. Ji Jia Wei hadn’t even been away a day when she realised time passed very slowly without him there with her. The admission from Guan Xiao Tong made him smile to himself. How nice. :o) :o).

But as nice as it is to see Guan Xiao Tong and Ji Jia Wei‘s relationship develop with Ji Jia Wei being so honest and reassuring, it also feels like everything is just the calm before the storm. We’ll be looking forward to seeing what part Guan Xiao Tong‘s ex plays in the next episodes. Storm or no storm, it should be interesting!