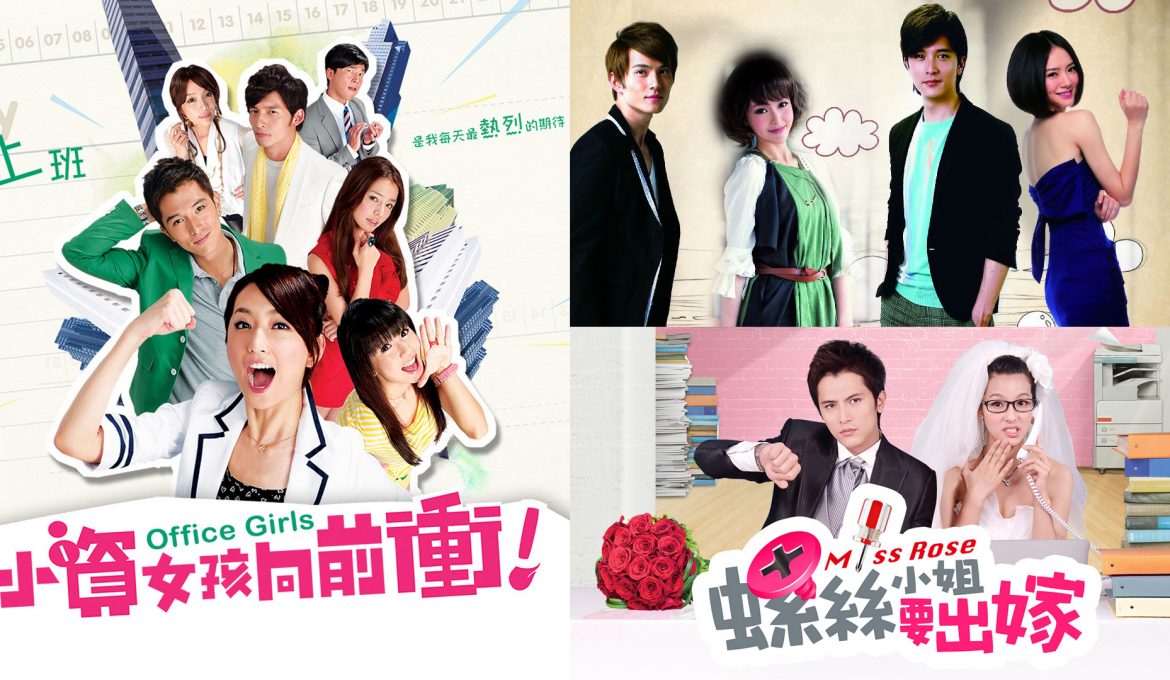 We first came across Roy Chiu years ago in a Taiwanese drama called, Easy Fortune Happy Life (2009). He was the second male lead in that one, playing a dark angel. The story in that series didn’t make much of an impression on us, so it didn’t catch us onto watching any more of Roy Chiu’s series. But then last year, we came across the 2012 Taiwanese romance-comedy series, Miss Rose, which Roy Chiu co-starred in. We remember how much we loved Roy Chiu in that series. So, when we saw that Roy Chiu was in Waking Love Up and Office Girls—as well as finding that the story synopsis in each of these series sounding quite interesting—we thought we would enjoy them. Both series didn’t disappoint! Like Miss Rose, we sped through Waking Love Up and Office Girls!

Watching Miss Rose, Waking Love Up and Office Girls, it has made Roy Chiu become one of those actors where we think, “If he’s in the series, we’ll most probably end up enjoying it and liking it”—because we enjoyed and liked each of the characters that Roy Chiu played in these three series.

Roy Chiu’s character in Miss Rose is a top executive. He is cold and distant who sees his employees as just employees he pays to do work for the company. But, on his mission to gather information and dismiss some greedy executives in his company, he becomes something like an underdog and he works with his employees to outsmart them to drive them out. In Waking Love Up, his character is a cold and harsh CEO with power and status, but he turns into a village folk wearing hand-me-down clothes, working as a kitchen hand and running errands for a small village eatery after a kidnapping event. And in Office Girls, his character is a quirky, fast talking womaniser and lover of the finer things in life—who, despite coming from a wealthy background, works as an office assistant who lives in a small and run down apartment with only a sofa as his bed and, if not leftover food from his upstairs neighbour, then instant noodles for dinner most nights because he, himself, is dirt poor.

These characters have characteristics and personality traits typical of idol characters—wealthy background, powerful, good-looking and desirable—but they go through a period of change where they become quite normal and ordinary. Sometimes, the characters even go as far as not appearing very impressive or special for quite some length of the series. This is what makes the characters that Roy Chiu has played interesting and likable.

All three of these Roy Chiu series also have a lot of the things we like about a series: they are set in the business world, have a nice ensemble of characters that we enjoy, interesting romance plot and the story is light.

We’ve read that Roy Chiu has done a series in 2014—another Mainland Chinese series called, Wine Beauty. Having briefly looked at the synopsis of this Mainland Chinese series, it’s again set in the world of business, but in the wine industry. Roy Chiu’s character in this series seems to be a nice guy who helps the underdog lead female character with her struggle against a power-hungry family member. It feels like this time round Roy Chiu’s character isn’t in a top executive position. Instead, the character seems to be quite modest and low-key. We’ll have to keep an eye out for this one to see what character Roy Chiu plays in this series. But like all Mainland Chinese series, it’s extremely hard to find them subbed. Still, we hope to have the chance to watch this one since the story itself sounds interesting and we haven’t come across a series that focuses around the wine industry; so, it will be quite interesting for that reason, also!

For those of you who have not watched the three Roy Chiu series we mentioned above—Miss Rose, Waking Love Up and Office Girls—we’ll write a brief description on what they’re about, below. Hopefully, you’ll enjoy them as much as we had!

Miss Rose (2012) – Taiwanese Series – Romance, Comedy
A hardworking 31-year-old secretary, Luo Si Yi (Megan Lai), makes a bet with a fortune teller to get married in one year or pay $1,000,000. Her work and personal relationship with a top executive of the company she works for, Gao Cheng Kuan (Roy Chiu), begins when Gao Cheng Kuan steps in to save her from an onslaught of detrimental comments and discouraging biology facts from her blind date.

Waking Love Up (2011) – Mainland Chinese Series – Romance, Comedy, Drama
Xiang Tian Qi (Roy Chiu), a cold and harsh Hotel CEO, has amnesia after falling off a cliff during a kidnapping event. With no memory of his name, status or former life, iang Tian Qi assumes a new identity of Liu Xiao Yu and starts a new, more modest and simpler life in a village town—one that is soon to be demolished to make way for a new and modern development. Liu Xiao Yu holds no special feelings for the village town. However, Liu Xiao Bei (Tiffany Tang)—a feisty, but kind, hardworking and dedicated village girl who will do anything for her beloved hometown and its residents—does. For Liu Xiao Bei and the village residents, Liu Xiao Yu becomes the mastermind in countering the order for demolition of the village, coming up with ideas and plans for the present and the future to ensure that the village remains untouched and unchanged. However, this demolition project has been planned and led by none other than himself—Xiang Tian Qi. Waking Love Up is a Mainland Chinese adaptation of the popular 2005 Taiwanese series, Prince Turns into a Frog.

Office Girls (2011) – Taiwanese Series – Romance, Comedy
Qin Zi Qi (Roy Chiu), a son of a large multi-story department store, knows only how to hook up with women and spend frivolously with his father’s no-limit charge card. As a means to change his son’s ways and turn him into a responsible individual worthy of taking over the company, Qin Zi Qi’s father takes away all of his financial backing and puts Qin Zi Qi to work as a lowly office assistant in the Sales department to have him pay off his spending and earn his own way. Poor and hungry, Qin Zi Qi becomes acquainted with the hardworking and frugal office worker, Sheng Xin Ren (Alice Ke), who slowly, but surely, teaches and changes Qin Zi Qi’s person to become the man Qin Zi Qi’s father hopes for his son to become.