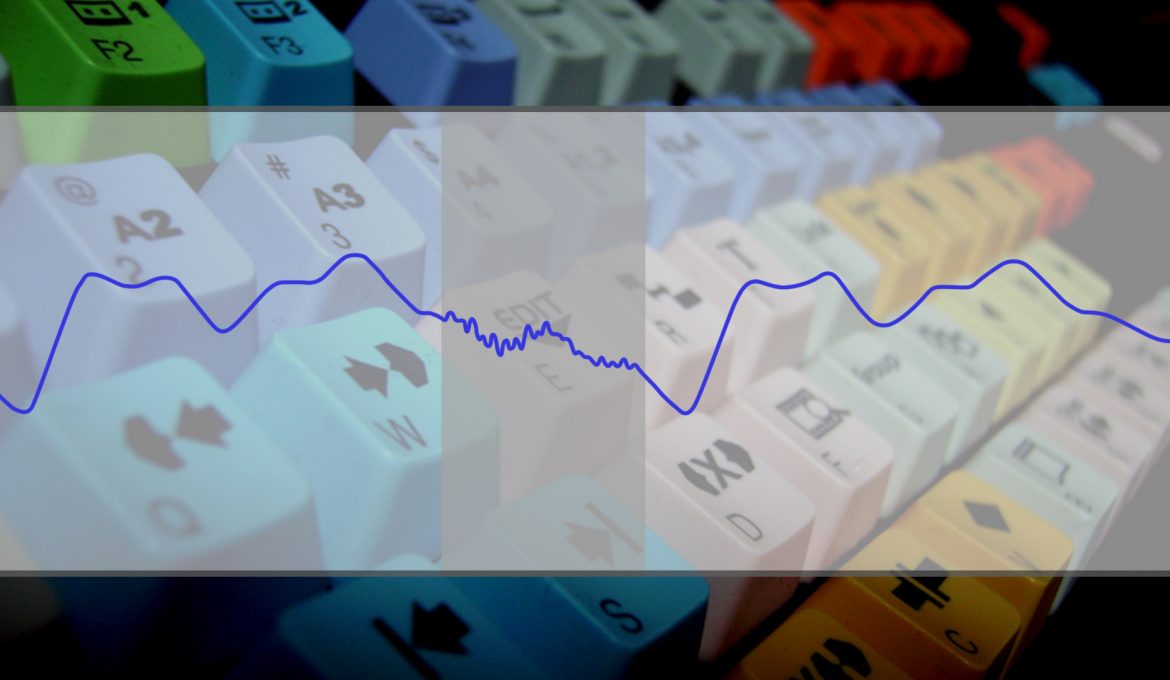 There are a lot of techniques to preventing clicks and mouth noises from appearing: for example drinking water; eating granny apples; not drinking coffee, milk, or alcohol; open up your mouth, give it a bit of a stretch beforehand; and some have suggested distancing the mic from the speaker and using pop filters and shields. Sometimes though, even if you’ve made sure you did all those things, they still appear in the recordings; and the only way is to edit them out in post-production.

We’re going to suggest a few ways to get rid of them. Before we go into that though, we thought we’d provide a few screen captures of what clicks look like in the wave so you know what to look for. Below, you will see that they appear as little jaggity things along the smooth curves of the wave. The clicks are circled in red.

Now, onto how we deal with clicks and mouth noises.

The first way to remove them is through the click removal tool in your audio editing program. When you can’t simply hit the Delete key and delete them out of existence, the easiest and quickest way to do it is through the Click Removal tool. If you have this tool in your program, all you have to do is select a small section of the wave (zoom in a lot then select the section where the click appears), select the sensitivity level you want, and then apply.

If Audacity doesn’t work for you, you might want to try Avid Audio’s Pro Tools, Adobe Audition, Sony’s SoundForge, or NCH Software’s WavePad: these programs will need purchasing, however.

The second way is to pick up a pencil tool and redrawing the wave. This is probably the most time consuming method, but it works well. The curve you draw doesn’t have to be perfect, but should roughly look like the ones adjacent the one you’re correcting. If you have access to a pen tablet, it will make the drawing a whole lot easier and faster, but it still takes a while and requires a steady hand.

Again, Audacity is one such program that has this pencil tool to apply such technique.

Sometimes, trying the trick of reducing the volume of the click works a treat. You could try reducing the volume of the click through Amplify (this is usually found under Effects) or by inserting keypoints on the audio track. When you do this, be careful not to apply too much reduction as you’ll end up hearing a thump where you applied this technique.

The last option we’re going to mention is to just go re-record the piece. We know that for some this is not an option with time and cost constraints of booking another session at the studio and bringing back the voice talent; but for those who are able to—like those who are working for themselves, recording and producing their own work at home, it might just be easier to re-record.

This is the the case with lip smacks, saliva noises, and those clicks that sound like a droplet of water falling from the tap. If you look below, you’ll see an image of what such clicks/mouth noises look like as a wave. The distortion (again, circled in red) appears in many areas of the wave, not just along a small portion of a crest or trough. With this particular example, you could spend some time redrawing, but there are times when you can’t even isolate and identify where exactly the distortion occurs, because the wave takes on a jaggity look throughout.

So there we have it. The above are some of the ways to edit these unwanted sounds and make them less noticeable—if not disappear. We’re certain these probably aren’t the only ways; but our aim wasn’t to provide you with all the ways to handle them; but to show a few of the ways we get rid of them, as well as, provide you a few screen captures of what the clicks/mouth noises look like so you know what to look for. We hope you have found this helpful!