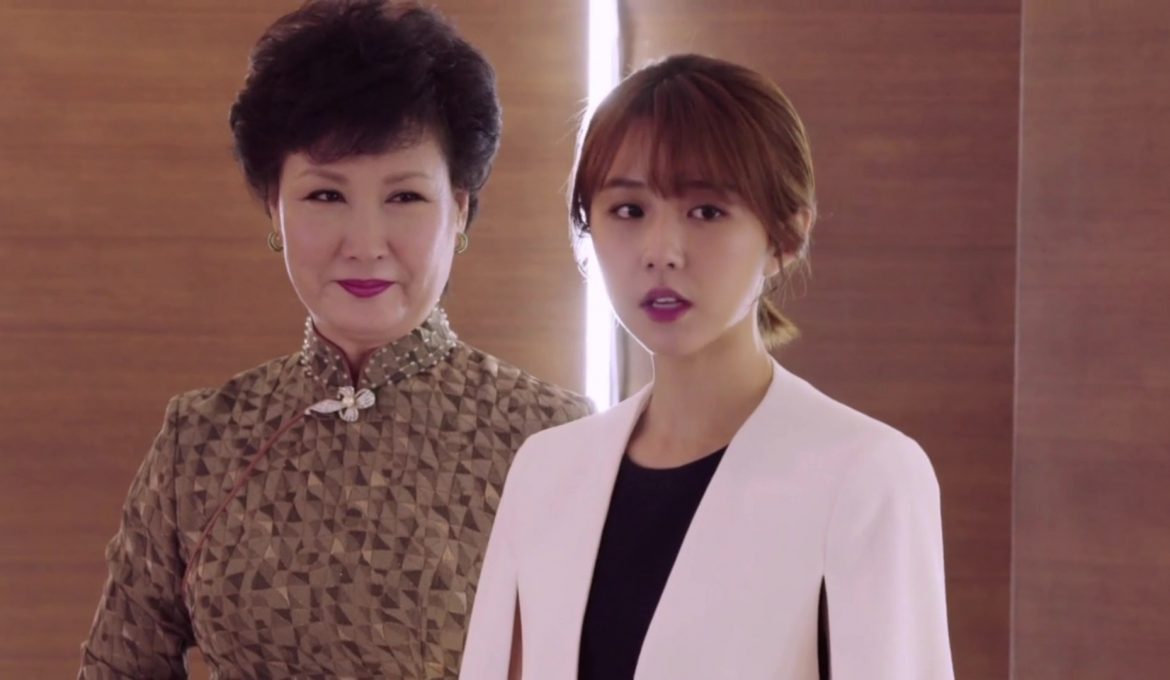 Wei Fen Qing becomes the Chairman of Yanis and there’s a new obstacle for Wei Fen Qing and Huo Ting En when Wei Fen Qing’s mother is against the two of them being together.

Wei Fen Qing seeks Grandma Huo to obtain the 10% share of Yanis she had once offered to her to change Yanis’ decision on selling the night market land. After Grandma Huo is assured Wei Fen Qing won’t harm Yanis, Grandma Huo provides the shares to allow Wei Fen Qing to become a director of Yanis and participate in a board meeting.

Wei Fen Qing stands before the directors and asks them all to reconsider their votes with a story about her reason for wanting to become the Chairman of Yanis.

“Seven years ago, my dad passed away. My mum raised me and my brother. We almost lived on the streets. It was the night market people who warmly took us in and allowed us to continue to survive.”

“I hope you can have another think on this, give one more chance to the people of the night markets and vote again.”

As Grandma Huo officially announces the new Chairman of Yanis, Huo Ting En and Ah Wei stops the announcement. Ah Wei introduces himself and let’s everyone know his reason for appearing at their board meeting.

“Let me introduce myself. My name is Meng Shao Wei. I stand in for my father, Meng Xing Da, and Pin Le Group at this board meeting today. In my hands are authorisation letters of the shareholders.”

“Our Meng family are in favour of Wei Feng Qing to be Chairman of Yanis.”

Ah Wei also solves Yanis’ financial problem with offering to purchase the land the night market is on. This also saves the threat of the night market being shut down. Ah Wei is seen as a hero and the real deal prince who is high above Huo Ting En in family background and coolness according to Ah Wei’s night market circle of friends.

Wei Fen Qing’s mum is upset after hearing the details of how the missing pages of the recipe book came to be in the hands of the Huo’s. She comes to suspect a possibility the accident may not be an accident. Grandma Huo pleads for Wei Fen Qing’s mum to not pass the grievances of their generation onto the next generation.

“I know that whatever I say now you won’t believe me. However, I beg you, don’t let our grievances pass down onto the next generation. I know you feel wronged and resent us. So long as it’s within my ability, I will do whatever you ask. I’m willing to do it. I really don’t wish our grievances to continue on. Really. Ting En and Fen Qing—the two of them truly love each other.”

The plea is denied. Wei Fen Qing’s mum isn’t able to forgive the actions of the Huo family.

“The Huo’s are too selfish. Too selfish! Right now, my only hope is that the Huo family will never ever appear before me again.”

Back home, Wei Fen Qing is told about what had happened in the past between the Huo’s and their family. Wei Fen Qing’s mum tells Wei Fen Qing she forbids her from marrying Huo Ting En.

“Why do you keep telling me to remember things and talking about the future? What’s up with you today?”

“Because, in the future, I will never appear in your life again.”

“I just think we are probably not suitable for each other.”

Another episode we didn’t enjoy. Situations are odd and fantastical.

Wei Fen Qing hasn’t shown any proof of having a lot of experience to be Chairman of a group like Yanis, so the rise from night market stall owner to being Chairman of a huge corporate company is too unrealistic. If there were at least scenes that directors were fed up with the Huo’s management of the company that they were willing to appoint basically any person, then we would think it could be possible. We have to see that so at least we’ll feel there was some logical reason why such outcome has come about.

Wei Fen Qing’s speech about wanting to save the night market as her reason for wanting to be Chairman of Yanis had nothing to do with what she could offer to help Yanis. So, we can’t imagine how she held onto the votes she got before that speech when her reason made Yanis appear like a means to a personal goal that had nothing to do with doing well by Yanis. She may have said she will never harm Yanis to Grandma Huo and Grandma Huo said she believed her, the directors still need to be convinced. Also, unlike Grandma Huo who wants to pay her debt to the Wei family hence can be seen as a reason why she’d agree to hand over the company to an inexperienced person like Wei Fen Qing, the directors don’t have that. We believe they’d only care about profits and performance.

The whole thing where Ah Wei buys the night market land, we think this could’ve happened without the event of Wei Fen Qing getting the shares to become Chairman. Ah Wei could have just purchased the night market land right when the news came telling of Yanis selling the land. This would still be showing Ah Wei to be using his company to help the person he loves if that was a reason why Wei Fen Qing was written to be Chairman of Yanis. We would have then been spared from watching such an unrealistic event as Wei Fen Qing becoming night market owner to Chairman of Yanis.

We can’t connect with the things that has taken place in these past few episodes. So unnatural, unrealistic and unbelievable.