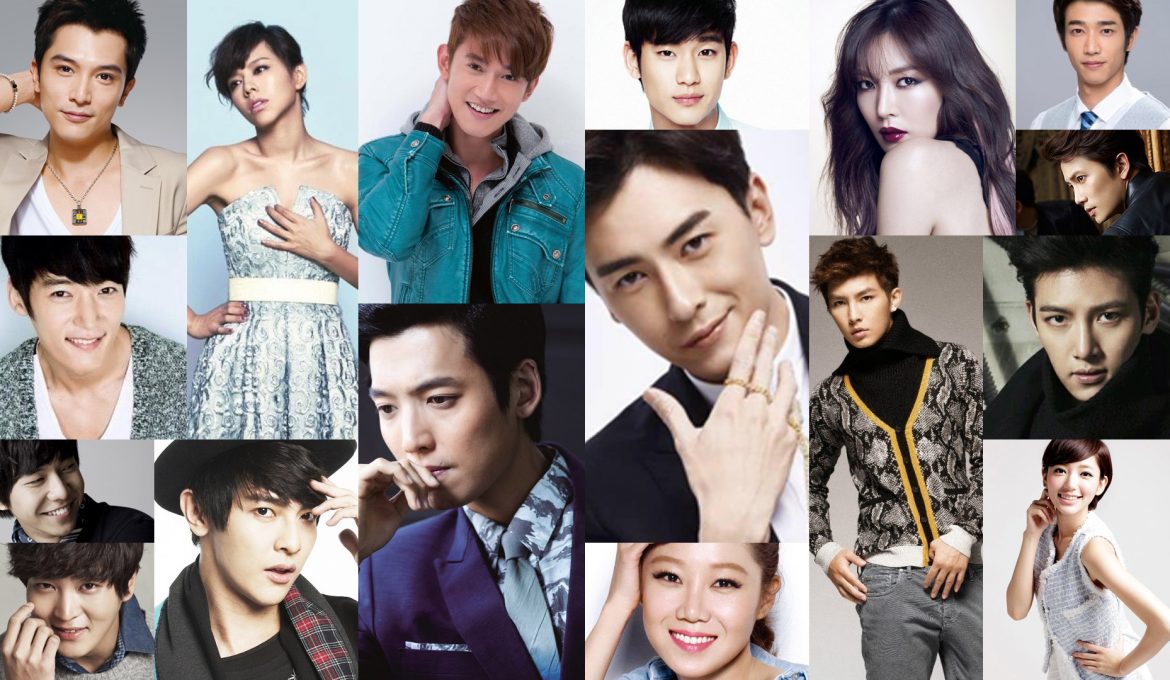 We love watching dramas and we write a lot about them, too. We don’t pick on what dramas to watch, or write about certain dramas, solely based on the actor or actress who’s in them (we go on whether the story is interesting, the characters, genre, theme), but sometimes we do pick what to watch and what drama to write about/cover based on our list of favourites. Just in case anyone is wondering who our favourite actors/actresses are, below is our list!

This group of actors and actresses, no matter what the drama is, what the story or genre, we’ll watch it! Our staples!

Many of Joe Cheng’s dramas have been just luke-warm. Joe Cheng’s not really had a successful or a really interesting drama since It Started with a Kiss (2005), but that doesn’t matter. We’ll support his dramas no matter what it is for the hope that the next one will be the hit. What’s more, Joe Cheng’s real-life persona is super awesome!

Chris Wu, we just love this actor. We’ve managed to watch four of his dramas: two as lead, two as second lead/supporting. We loved every one of them. Chris Wu is amazing. Though we’ve not managed to get access to his other dramas, he comes off as a very versatile actor. So captivating. Read our Chris Wu drama recommendations.

Ever since we saw Kimi Hsia in Taiwanese drama, Rock ‘n’ Road (2014), playing a has-been child-star, we were hooked. Kimi Hsia’s work isn’t as available to us on this side of the world which is really a shame. Her upcoming drama, Constellation Women Series: Aquarius (2015), might be available, though! We will definitely be watching!

We love Puff Guo. We first saw her in the Taiwanese drama, Just You (2013), playing the loud-mouthed Chen Liang Liang who tries to get her boss Qi Yi (Aaron Yan) to fall for her so she can lift the office romance ban. Since then we’ve watched every drama of hers. Love all her characters. We think Puff Guo’s an awesome person in real-life, too!

Loved Aaron Yan in Taiwanese drama, Just You (2013). Sometimes we get annoyed with some of his characters, but they create the kind of drama that makes us unable to stop watching. His drama soundtracks are awesome, too. Every drama he’s been in, he always manages to come out with a song that makes us put it on repeat!

The number of Jiro Wang dramas we’ve watched and enjoyed have been quite a number. His dramas are most of the time light, comedic and fun to watch. No angst, no melodrama. We like that about Jiro Wang dramas. He’s played some pretty cool characters, too: our favourite ones are from ToGetHer (2009), Absolute Boyfriend (2012) and Fabulous Boys (2013).

Ever since we saw Jang Geun Suk as Lee Chang Hwi in Korean historical drama, Hong Gil Dong (2009), we’ve been following his dramas. We aren’t fans of the actor, but whenever we hear Jang Geun Suk’s got a new drama out, we’re always interested to see what the drama will be and what character he’ll be playing.

We’ve watched some great dramas from this group of actors and actresses. They’ve yet to disappoint, so these are the ones we put in effort to read up on their upcoming dramas and do our best to watch their works.

Every drama Kim Soo Hyun’s been in as lead, we’ve watched. With his dramas, we don’t go into them because of Kim Soo Hyun, but because we genuinely find the dramas themselves interesting. So far, every drama of his has kept us watching with anticipation from start to end. Our favourite is Dream High (2011) and The Producers (2015).

We first saw Joo Won in Master Baker: Kim Tak Gu. For a while we didn’t watch anything else from Joo Won until he starred in Naeil Cantabile (2014) which happens to be the Korean adaptation of our all-time favourite Japanese drama Nodame Cantabile. We loved Joo Won in Naeil Cantabile. Now, we’re watching him in Yong Pal (2015) and loving his character there! We’ll be following his new works from now on!

We’ve seen a number of Gong Hyo Jin’s dramas and all have been great. We love Master’s Sun (2013)!! Pasta (2010) and The Producers (2015) are also great watches. We didn’t quite finish It’s Okay, That’s Love (2014), but not because it’s not good: there were other dramas we wanted to watch mid-way through. Suffice to say, Gong Hyo Jin dramas rarely disappoint. We like the characters and scripts she chooses a lot!

We like to try watch dramas with different kind of stories, different genres every now and then, but most of the time, we just want to watch a nice romance-comedy-drama. Roy Chiu dramas are exactly that. They’re our kind of dramas we generally love to watch! His characters are pretty light, cool, but not pretentious; they’re like an underdog top-dog, occupying high positions but feel somewhat down-to-earth, understated and modest. Like!

We’ve seen quite a number of dramas of Choi Jin Hyuk’s and they’ve all been so good! Not all the dramas we’ve watched have him as lead, but he doesn’t have to be lead to be interesting—for example, Wol Ryung from Gu Family Book (2013), wow! And Kim Won from The Heirs (2013), he grabbed our attention more than Kim Tan (Lee Min Ho). Love him in Emergency Couple (2014) and Pride and Prejudice (2014). This actor also has a very strong singing voice!

We’ve discovered a lot of cool actors and actresses lately. Since we haven’t seen enough to group them up above, they’re currently within our radar of possibly being grouped with the others. After watching more, a few from this list might make it to being on the staples list!

We’ve only seen Falling for Innocence (2015) and Heartless City (2013), but we have a feeling we’re going to like most of Jung Kyung Ho’s dramas. Not only is he mesmerising on-screen, his choice of dramas and characters are also very interesting. We can’t forget his Heartless City character! His dramas might just be those we’ll watch no matter what it is. We’ll be going through his older dramas for sure!

Our favourite Kim So Yeon drama is the 2000 Korean drama, All About Eve, where she plays second female lead. This drama is the first ever Asian drama we called our favourite. Since that drama, we haven’t seen any dramas featuring this actress. But we’ve reacquainted ourselves with Kim So Yeon through the 2015 Korean drama, Falling for Innocence (2015). We’ll probably go and watch her later dramas, too!

We recently finished watching Korean drama, Healer (2015), which has Ji Chang Wook as its leading man. We love seeing him as the mild-mannered Park Bong Soo who works at a news agency and then become this intimidating, skillful errand-guy, Seo Jung Hoo, who leaps buildings, infiltrate organisations under the Healer identity. We will definitely be keeping an eye out for what drama and character Ji Chang Wook will be in/playing next!

We really love Ji Sung in Kill Me, Heal Me (2015)! He played seven different characters… technically it’s five, since the other two didn’t feature much. Still, he was awesome! Because of this series, we watched one of his earlier dramas, Save Me the Last Dance (2004 Korean version of 2012 Chinese drama, Waking Love Up). We’ll probably watch more of his older dramas since we didn’t quite get through Save Me the Last Dance.

We first came across Jasper Liu in Taiwanese drama, Pleasantly Surprised (2014). We really liked him in that drama. He was great alongside Puff Guo. We really like his latest drama When I See You Again as well. He’s also got I Am Sorry, I Love You, a romance/horror/supernatural drama, coming up. It looks interesting. We will be checking in with this upcoming drama, too!

IF EVERYTHING ELSE LOOKS UNINTERESTING!

We really like this last group of actors/actresses, but with so many dramas we want to watch, sometimes we miss watching their latest dramas. If the drama is talked about lots or if we’ve got nothing better to watch, we’ll go with dramas from this group!

We love Zhang Han in Shan Shan Comes to Eat (2014). If you haven’t watched this awesome Chinese series, we recommend it! He was also very awesome in The Four (2015), another Chinese series that aired this year.

Since discovering Park Shin Hye in Korean drama, You’re Beautiful (2009), we’ve not missed one of her dramas. We don’t always watch her latest dramas as they air, but if it looks good, we’ll eventually get to them.

Loved Lee Seung Gi in You’re All Surrounded (2014). We also really liked him in Gu Family Book. We’ve yet to watch all of his dramas, but we will probably try to watch some of his older ones. We’ve lined up My Girlfriend is a Nine-Tailed Fox. Just got to find time to get to it!

We really like Kim Ji Hoon in Flower Boy Next Door. Even though he wasn’t the lead, we liked him. Our most favourite series featuring/starring Kim Ji Hoon is Jang Bori is Here (2014). His character was a lovable and funny character that made the series fun to watch!!

We first saw Xie Kun Da in Prince William (2014). We’re not sure what it is about this series, but we just loved his country-bumpkin character. Then he played a ghost in Love Cheque Charge (2014) and we loved him there even more. Definitely will try to watch more of his future dramas.

Nodame Cantabile (2006) is the only drama we’ve seen from Ueno Juri. It’s hard getting access to her work. Whenever her dramas are made available to us, we’ll surely be interested in watching it. Her performance as Noda Megumi was fantastic. We would love the chance to see her play other characters!