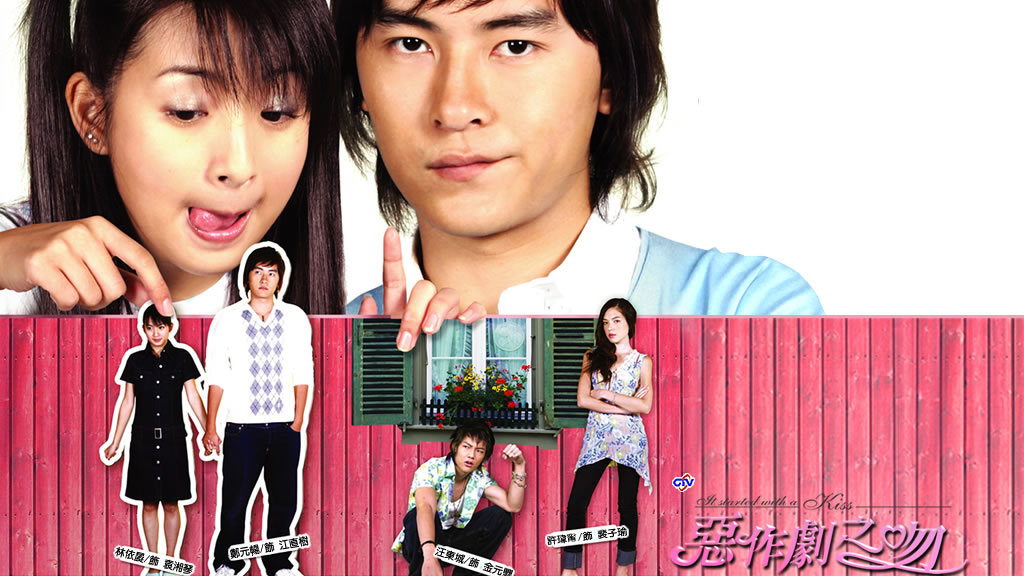 It’s been a while since we’ve added an entry. A friend introduced to us this series “It Started With a Kiss (2005)”—a Taiwanese adaptation of the popular Japanese manga “Itazura na Kiss”—and we haven’t been able to stop watching it.

The series stars a high school girl, Yuan Xiang Qin (Lin Yi Chen, a.k.a. Ariel Lin), who is intellectually challenged. On the academic ladder, she is right at the bottom, belonging to a class known to the school as F-Class. During a school assembly in her first year, she falls for a fellow schoolmate, Jiang Zhi Shu (Zheng Yuan Chang, a.k.a. Joe Cheng), who is not only tall, handsome and admired by all, but he is smart—extremely smart, having the IQ of 200 and is Taiwan’s smartest student. Clearly, these two belong to two different worlds: Xiang Qin belongs to the world of the intellectually-challenged and is looked down upon by her peers, while Jiang Zhi Shu is exceptionally bright and admired and respected by all around him.

Despite this difference, Xiang Qin builds up the courage to confess her feelings to the seemingly unattainable Jiang Zhi Shu through a hand-written letter. But with him shoving past her during her attempt, she is very much rejected and fails, becoming the laughing stock of the school. Although her confession ended in failure, fate was seemingly on her side: a small earthquake levels only her place, leading her to take temporary residence at the house belonging to none other than Jiang Zhi Shu and his family. And thus begins the story to win his affections.

At first, we thought what a convenient chain of events: cool guy rejects not-so-cool girl, not-so-cool girl is made homeless after an earthquake that brings down only her house; to make it more convenient, her father and Jiang Zhi Shu’s father are old friends from when they were younger and she’s to move in with his family. The critical thought was quickly brushed aside, though, as the series started to develop, gluing our eyes to the screen. We watched episode after episode, hours on end. There was a lot more going on than simply getting the male and female leads to meet and their worlds to combine. It had themes and messages it wanted to tell, giving an otherwise shallow and typical story a bit more depth.

There are the messages of hard work, perseverance, and—we suppose—to not be too quick to judge people based on their intelligence (or lack there of in the case of Xiang Qin and the students in F-Class). Zhi Shu is intellectually superior, no one can match his perfect record of being number one in academic studies. As smart as he is and as promising as his career prospects appear, though, Zhi Shu is not unbeatable in the world. F-Class’ only student to fail to graduate high school, Ah Jin (Jiro Wang), is an example of this point. He may not have the high school diploma, and therefore isn’t able to enter University to study; but he discovers he has a passion for food and a strong desire to become a top chef. This passion and drive will propel him forward to success. Through the Ah Jin character, the series draws attention to the fact that success in the world does not need to follow set paths and traditions. As long as you have a passion and dedication for something, you can still achieve great things outside of traditional routes.

There is a message in the series that comes through that isn’t as commendable: that is, revolving one’s decisions around a guy is… (what’s the word?) Normal? Okay? Xiang Qin is quite persistent with her crush on Zhi Shu. She makes a lot of her decisions based on what Zhi Shu is doing to be around him. First impression is that that is what she is doing: she is revolving her life around him. Not a good message. When we take into consideration of her stubborn personality, the message isn’t as strong. Her persevering ways does not end with Zhi Shu: she does show perseverance in other areas of her life: school, sports and even with other people. Her stubbornness is consistent, so we can look past it and see her perseverance with Zhi Shu as a result of her stubbornness as well.

In all fairness, she does try to give him up multiple times; Zhi Shu just doesn’t make it easy for her when he turns up just at the right moment to provide her hope again. What’s more, she does seem to like the guy for his intelligence more than his looks. She was always impressed by his intelligence, his mental capacity rather than his looks or his popularity. She appears to be attracted to what she lacks, which actually makes us think of her character quite positively.

Xiang Qin can be viewed as not the best role model for impressionable minds—definitely. But, we can justify her ways with her stubborn personality; she has also shown that there is a limit to how far she will go with pursuing Zhi Shu (i.e. at the end); so, although it would be nice if she would stand up to him more often, we do see her as a strong, confident, optimistic character, rather than a weak, submissive one which some may view her as.

Zhi Shu, he is an interesting character. He isn’t just cold and serious all the time. He does have a playful side, too. He is smart, but there is a problem in being too smart: it leaves him uninspired and unmotivated as everything comes easily to him. He’s a high achiever, but he isn’t high achieving (if that makes sense): he has achieved so much academically; but with no goals, no direction in life, it has the potential of hindering him from realising his potential in the world. So, when comparing him to someone like Xiang Qin in this light, Xiang Qin actually stands taller than he does. Despite everything being a challenge to her, her optimistic view on life, perseverance and self-belief gets her to try her best. She dares to try against all odds. She remains highly motivated. Despite appearing like the power is in Zhi Shu’s hands, the power may actually be in Xiang Qin’s. She appears like she has nothing to offer Zhi Shu, but in reality, she probably has the most important qualities needed to reach the very unapproachable Zhi Shu and help him break out of his rut and inspire him. Zhi Shu probably needs her more than she needs him.

This series is interesting. If we view it with a shallow kind of view, we see it as simply about a girl trying too hard to catch the attention of a guy who is beyond her reach. If we view it more deeply, we find that there is actually a point and a number of positive messages and themes in the series. Behind the main story is its commentary on intelligence, hard work, perseverance and success.

We recommend giving this series a go if you’re looking for a great watch. With the Xiang Qin character, you may need an open mind. There were a few episodes towards the middle that dragged a little, but it does serve to build the intensity and emotions at the end. The music in this fit perfectly: it really helps draw out and amplify the emotions in the series further. It’s also very funny. And of course, it’s a very addictive series (for us anyway : oD : oD).