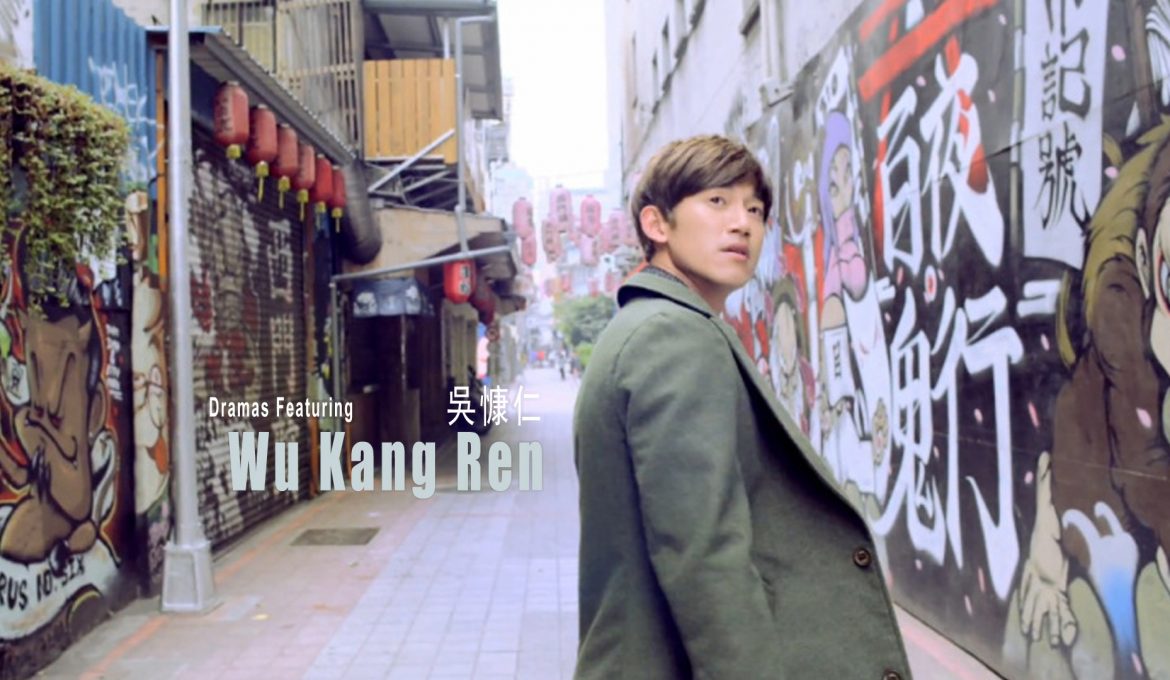 We have drama recommendations! If you’re looking for your next awesome romance drama watch—or in this case, watches—we recommend Rock ‘n’ Road / A咖的路 (2014), Substitute Princess / 金大花的華麗冒險 (2013) and What is Love / 花是愛 (2012). They’re all Taiwanese dramas and all featuring Wu Kang Ren (also can be known as Chris Wu).

We’re quite new to Wu Kang Ren and his dramas. We came across the Taiwanese actor only this year, through Rock ‘n’ Road. His absorbing onscreen presence as Zhou Shu Yu on the series led us to watch Substitute Princess and What is Love. Wu Kang Ren is fantastic in all three dramas: he has this natural, calm command of the screen when he’s playing serious characters; when he’s playing a comedic character, he lights right up and is all-out funny (he gives off this fun vibe in these scenes, like this is who Wu Kang Ren really is in real life). It probably sounds like the only reason we’re recommending the dramas is because of Wu Kang Ren right about now; but really, he is only part of the reason. The dramas themselves are actually well done and very addictive.

The three series feature popular story tropes: Rock ‘n’ Road features an underdog story with the female lead character working her way (back) up to the top; Substitute Princess is a doppelganger story that has the female lead character act as her double temporarily to hold off suspicion that there is anything wrong with the real deal; and What is Love features a story about a woman in her 30s quickly passing her prime to get married. Story-wise, they’re nothing out of the ordinary. They all go the way romance dramas go, which is to be expected.

What we love about the three series is that the drama in the story is understated as opposed to exaggerated and forced, yet still it manages to grip attention. It doesn’t rely on theatrics, melodrama or forced plots with lots of twists and turns to keep the story going; obstacles aren’t met with overly dramatic reactions—there are no excessively emotional lead characters over-indulging in self-pity when the going gets tough. These dramas have a very down-to-earth tone about them: they keep the level of drama equal to the severity of the problem so as to keep things as realistic as a drama series can be. Much of the drama is the result of internal forces rather than external forces, focusing more attention on the character’s problems and limitations within than, say, the antagonistic actions from without to create the conflict and drama in the story.

Rock ‘n’ Road, a story about Lin Wei Zhen (Kimi Hsia), a fallen A-list child star, wanting to return to her former glory in her adult life for her mother and late father as well as for herself is the kind of story that have very little outside interference to stop her from rising to the top and reaching her goal. Her inability to rise mainly lies with her lack of understanding in how to promote her talents in the initial stages, and then not having her talent recognised by the public and the media in the following stages. Top singing diva, Yang Jia Xin (Nita Lei), and her manager, Xu Li Da (Mike Lee), can be seen as antagonistic as they do try to take away opportunities for Lin Wei Zhen to gain exposure; there is also a moment of underhanded play; but such antagonistic actions don’t drag on for long as other developments take over.

And so, the pull of this series is in seeing Lin Wei Zhen struggle and then rise to challenges when she is faced with them and be that much closer to realising her hopes and dreams.

Of course there is also the wonderful pairing of Lin Wei Zhen and Zhou Shu Yu (Wu Kang Ren) that makes this series so addictive. Watching Zhou Shu Yu discover Lin Wei Zhen‘s talent and potential bit by bit as he helps her become an A-list star, and then finally falling for her is also a highlight of the series.

Substitute Princess starts off slowly, but this series picks up to be a super watch after the third episode. The story of Substitute Princess has Jin Da Hua (Nikki Hsieh) pose as Du Liang Yan in order to save her grocery business and home after her gambling father used it as collateral and lost. Du Liang Yan is the fiancée of Sheng Da property developing group General Manager, Ouyang Tai (Wu Kang Ren). The commission comes after a mountain-climbing accident which leaves her seriously incapacitated. Fearing that news of her condition could cause instability in company standings as well as open up challenges to Ouyang Tai‘s position as head of Sheng Da, Ouyang Tai is convinced by his friend to bring in a stand-in until Du Liang Yan recovers. (Du Liang Yan and Ouyang Tai‘s engagement is both for love and a business dealing, so her wellbeing is linked to the Group’s stability.)

Out of the three drama series, Substitute Princess had the most potential for melodrama and angst: tragic loss, deception, struggles for power—antagonists could have been brought in over and over again to make it really tough for the leads and keep us viewers on the edge of our seats, wondering when they will get through it; as well, Ouyang Tai could have succumbed to it all and given the series a good bit of angst, too. But no, outside forces causing problems were minimal and there were no breakdowns from Ouyang Tai (none that lasts longer than a scene anyway!).

Substitute Princess sticks with mainly focusing on Ouyang Tai‘s loss of his fiancée and his relationship with Jin Da Hua who he will need to let go eventually, which is a big part why the series is so interesting.

Just a note, unlike other doppelganger stories in other drama series, Jin Da Hua and Du Liang Yan are not exact body doubles. Jin Da Hua is born with very prominent buck teeth. The story requires Jin Da Hua to take on a bit of dental and plastic surgery to look like Du Liang Yan, so it starts off a little fantastical and a bit wacky, but look past this and Substitute Princess is, as we already mentioned, a super, super watch!

Finally, What is Love. This series is a romance-comedy series that explores various kinds of love: romantic love, family love and friendship love. Its main focus, though, is romantic love. What is Love focuses on two characters with contrasting views of what love is. Li Yi Hua (Jade Chou), a single woman in her 30s, believes in true, naturally-occurring love that doesn’t require effort to obtain. She believes true love will come to her and there is no need for false pretenses and putting on shows to gain affection for true love to bloom. Bai Zong You (Wu Kang Ren), a philanderer, sees love as a game for losers. He is far from what Li Yi Hua calls true love, but she finds herself caught in his game of targeting and conquering women most susceptible to his act (which are the lonely types who most want love, but can’t seem to obtain it). Li Yi Hua is reeled into Bai Zong You‘s trap and she begins to fall for him, thinking he is the naturally-occuring love she’s been waiting for all this time.

In this battle of love between Li Yi Hua and Bai Zong You, Bai Zong You appears to win. Despite her being the first to uncover his game and prevent him from taking things all the way, he was able to extract a confession from her that she, a person who believed that true love can only be obtained naturally, was fooled—that for a moment, that feeling she thought was true love, was born from a situation that was full of pretense and show. But in the war of love, it is not so clearly won. Upon seeing Li Yi Hua‘s pitiful state and her streaming tears, Bai Zong You admits a noticeable ache in his heart had surfaced.

What is Love is a nice mix of interesting characters and comedy that include a nice theme. Bai Zong You is quite an interesting character. These days you don’t see characters like him on a series. They’re often the wealthy, in charge of a coorporation type characters that easily have viewers in the palm of their hands. Bai Zong You, he’s not immediately likable. He’s cockily confident, slimy and insensitive, but as the series progresses (as in true romance-drama fashion), the character transforms. With Li Yi Hua, she’s no better when compared to Bai Zong You, she may not go around playing men, but her standards are much too high and unrealistic. Both characters have room to change and meet in the middle. The character transformations and seeing them both become winners in the war of love together and with each other is what we wait for in this series.

And so we come to the end of the dramas. It’s a shame we are at the end of the road with Wu Kang Ren dramas because we’ve enjoyed them so much. If only we had access to more. If you’ve not yet discovered Wu Kang Ren or his dramas, start with these. Wu Kang Ren and his dramas are truly that good, especially if you enjoy romance dramas with a more down-to-earth tone without the exaggerated drama and forced plots, but still equally exciting. All these dramas are written well with (in our opinion) awesome lead and supporting characters.

If after watching these three dramas you’re finding that you’re wanting to see more of Wu Kang Ren’s awesome work, he does have a new drama that is currently airing, called Any Lie Can Become Truth. This time he’s playing a journalist and starring next to Ella Chen. How we’d love to watch this just to see if we can make the number of Wu Kang Ren drama series we like four series out of four. It’s difficult getting access to his dramas. They’re just not as readily available on the major drama streaming sites like Viki and DramaFever; his dramas either don’t feature on them or they’re locked to certain parts of the world which often do not include us. If anyone know of a place where it is available to us in English subtitles, drop us a line!