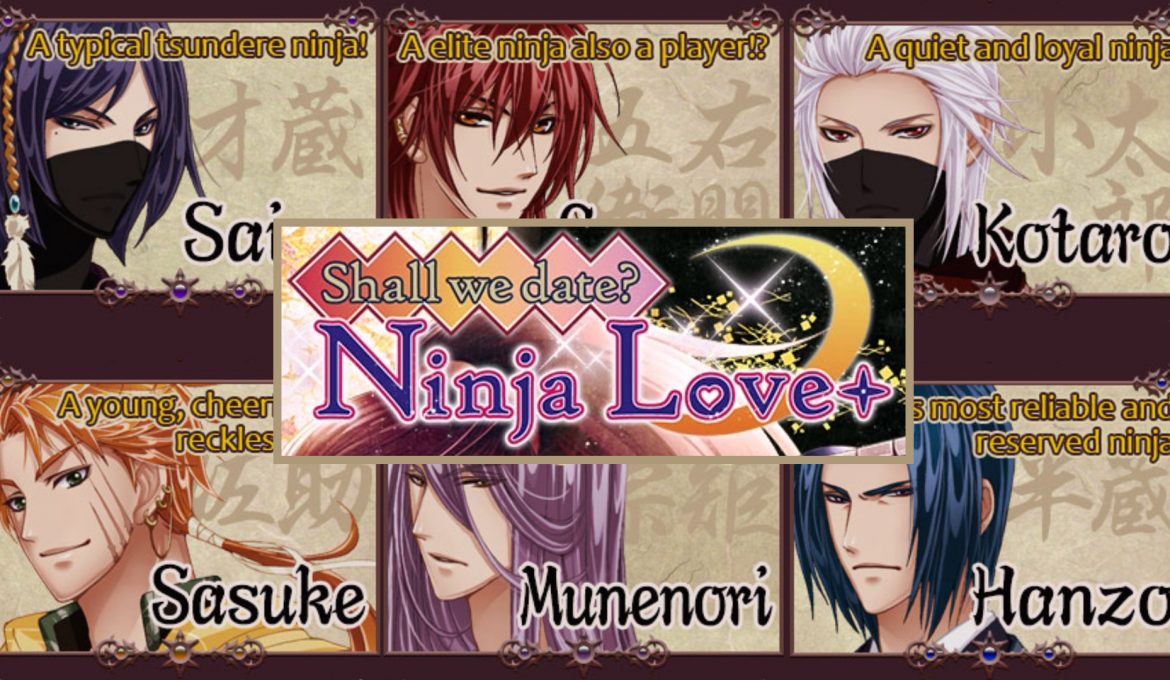 The Story
A war is currently going on in the land. Oda Nobunaga is an evil warlord with a desire to wipe out all ninjas. You are the Kusunoki Princess who is the symbol of unity for all ninjas in the nation!

Saizo’s character game is an awesome one. It provided a good balance of ninja action and romance. The story follows your character aiming to become a strong female ninja. You get trained by Kuma, a female ninja, as well as Saizo. You are seen being of some help in some of the battles the ninjas come across. During training, there are times you get injured and it brings in some aww-worthy moments between you and Saizo. These moments has Saizo slowly become less distant and closed off and start to become fond of you. The love rival in Saizo’s character game seems to be Sasuke and Goemon as both of them express interest. Saizo’s character game is our favourite out of the characters we’ve played.

We found that it’s relatively harder to get through a story in Shall we date?: Ninja Love than the other story apps in the series because of the checkpoint that requires an item called, Passport. As you get further along in the game, the number of the passport item required to clear the checkpoint increases as you get closer to the end of the story. None are gifted through the in-game mailbox and the only other way you can obtain the passport item without spending 1000 kobans/passport (game currency) or real money is through the daily logins. But even that is only once every nine weeks. There’s no event periods that allow you to win prizes to help you with this, either.

Getting a Super Happy Ending isn’t easy, either. There are three choices and these choices can be quite ambiguous or seemingly out of place for the situation. Sometimes the choices are re-worded after making the choice and it’s only then you realise that it’s not as desirable as before you selected it. It’s quite hard choosing the one that gives the highest increase in the love meter. The best we can get is always the second best choice. Choosing the right response feels like a game of understanding the love interest’s personality in this story app. So far, we’ve only ever been able to get Normal Ending without the help of a love potion (an item you can buy with real money, obtained for completing a mission, or gifted to you if you’re lucky to increase the love meter) or cheating. It’s quite hard to get it right.

Still, Shall we date?: Ninja Love is worth playing even if a Normal Ending is all we can get for yet another character game. That’s because the reward for completing a character game is the unlocking of a cool spin-off story! This cool spin-off story is in the point of view of your love interest! It doesn’t matter if you get a Normal, Happy or Super Happy ending. As long as you complete a story, it gets unlocked. These stories are called, A Moment in his Shoes. We warn you, though: judging from the ones we’ve unlocked, they are quite M-rated! There are eight short chapters in A Moment in his Shoes spin-off stories. They allow you to read straight through. There’s no need for the use of energy, no checkpoints or mini game checkpoints. That’s really cool! It’s a free play!

These A Moment in his Shoes spin-off stories are quite hard to find after a while of not playing! We clicked here and there for a while before we got to it! Here’s the path: Menu > Album & Diary > Diary. Once in the Diary screen, in the dropdown menu for the Character field, select the character and then in the dropdown menu for the Story Type field, select Spin-off Story. Click the red ‘OK’ button underneath. The screen will switch to the spin-off stories (you might see that nothing’s happening, but it’s probably still loading. It will switch, eventually. If it doesn’t, click ‘OK’ button again). Once there, scroll down to the bottom until you see a ‘Next’ button. Click it and keep clicking the ‘Next’ button until you see [ A Moment in his Shoes ] Sequel story!. It should be the very last story in the list! Here’s a screenshot to find this spin-off story:

Shall we date?: Ninja Love is our second favourite story app in the Shall we date? series. The story is good, there’s some good action and the writing of the female lead character personality is one we like. She is written to be a strong character with a likable personality in all of three of the character games we’ve played. We haven’t read any of the spin-off stories or event stories in this story app except for A Moment in his Shoes spin-off story. This spin-off story is definitely a great incentive to continue playing and completing each of the character stories in the story app!

Anyone playing Shall we date?: Ninja Love? What do you think of it? We’d love to hear from others playing this story app and hear about how you find the story, who your favourite character is, which is your favourite spin-off and event stories, etc.