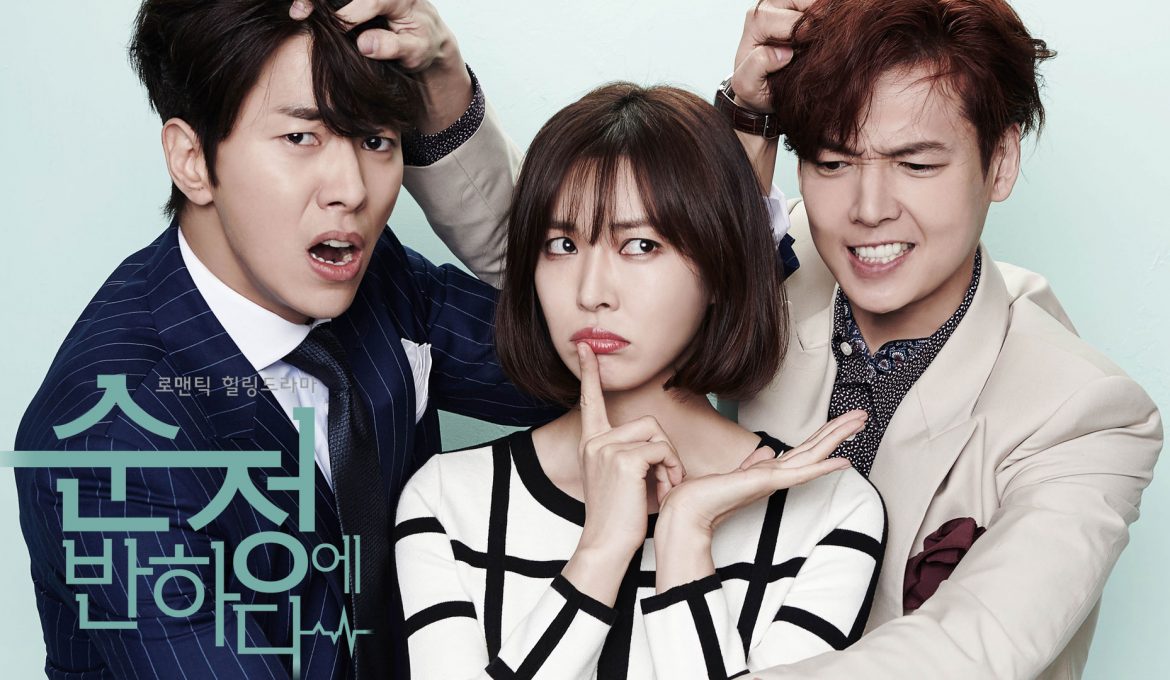 We came across Korean drama, Falling for Innocence / 순정에 반하다, a couple of months ago, mid-way through its airing. The romance story-line focusing around a heart transplant which Falling for Innocence employs is not usually what we watch, but with not much else interesting at the time, we thought we’d see how it goes. For the first couple episodes, we weren’t watching too intently, thinking it was going to be just another romance drama set in the business world. By the end of the drama though, we loved it!

The story focuses on ruthless Gold Partners Director of the Asian Division Kang Min Ho (Jung Kyung Ho) who’s out to bring down cosmetic company, Hermia. Behind this is the story where his uncle, Kang Hyun Chul (Park Yeong Gyu), the current president of Hermia, schemed to have his father, Kang Hee Chul, the then president of Hermia, removed from his post by making it look like his father was embezzling money from the company and evading tax—which his uncle succeeds. His uncle not only seizes control of the presidential seat, but he manages to take ownership of all his father’s shares after his death as well. All of this happens when he was still just a young boy.

With Hermia under investigation for the possible use of a prohibited ingredient in their top-selling cosmetic cream which ignites widespread recalls, Kang Min Ho look to move in on Hermia and bring it to its knees as the company struggles to fulfill its obligations to its creditors/bond holders. However, he doesn’t have much time to carry out his plans: he suffers from dilated primary cardiomyopathy (which he inherited from his father) with only one month to live. He is given a 1% chance of finding a heart donor his body won’t reject and surviving.

This 1% chance comes when Ma Dong Wook (Jin Goo)—a detective investigating the Hermia prohibited ingredients case (who’s also the fiancé of female lead character, Kim Soon Jung, played by Kim So Yeon)—dies from a suspicious hit-and-run. The heart transplant is a success and Kang Min Ho receives a new lease on life and is able to continue towards his goal. The only thing is he starts to experience unfamiliar emotions—concern, sympathy, understanding (many of them brought on by Kim Soon Jung), which changes his perspective on things and subsequently his actions. He also begins to show traits and skills that aren’t his own—traits and skills reminiscent of the late detective Ma Dong Wook. What’s most disturbing, though, is the experience of a reoccurring dream which has him lying on the asphalt, bleeding from the head and pleading for an unknown person standing over him to save him.

As we said already, we didn’t think we’d like a series where the heart transplant is central to the story and the romance arc, but it really works well here. We find ourselves getting behind so much in this series—the characters, the relationships, the business arc; so, basically, the whole story. We just love it all! :oP :oP.

In terms of the romance arc, it’s like a hate-hate relationship that develops into a love-love relationship after the heart transplant, which we find awesome. Actually, we’re not sure if we could call it a hate-hate relationship, but Kang Min Ho definitely despises Kim Soon Jung. He calls her a “dog barking in generations” for the fact that both she and her late father served his uncle so loyally.

Kim Soon Jung, she’s professional towards him, but her expression is always serious whenever he’s around. She calls him a “human butcher” for putting a price on Hermia‘s employees and wanting to sell them all off during Hermia‘s financial problems. To her and the rest of the world, he comes off like a tyrant on one sole mission, and that is to make more money—not just more money, but more money than the previous day. The corporate world calls him the “Corporate Serial Killer” as he controls millions of company shares and can make a decision to lay off thousands of employees in one lunch break without regard for their situation.

What she and everyone else doesn’t see, though, is the pitiful life he leads, one that deserves some sympathy. As briefly mentioned, at nine years old, his father lay in hospital whilst his uncle heartlessly schemed to have himself elected as Hermia‘s president before having all his father’s shares transferred over to himself upon his father’s passing from his heart disease. Following that, Kang Min Ho‘s mother commits suicide. Now, Kang Min Ho is suffering from the same kind of condition and have a very short time to do what he really wants and settle his heart before he suffers the same fate as his father. Kang Min Ho may strut around calling shots without batting an eyelid, making thousands of ruthless decisions on the vast portfolio of companies under his control and appear strong; but come nightfall, he is dead tired and weak. The only thing that keeps him going is the medication which he takes to keep him going long enough to carry him through the day as well as the self-drive to see his goal achieved before his time is up.

Kim Soon Jung was able to catch a glimpse of this contrasting forms when he called her to his apartment to discuss an incident which involved a punch-up between him and Ma Dong Wook after Kang Min Ho alienated both Ma Dong Wook‘s father, Ma Tae Seok (Ahn Suk Hwan), and Kim Soon Jung at a Chinese factory. (The Chinese factory is owned by Hermia; Ma Tae Seok is an employee at the factory. Kang Min Ho, as Hermia‘s largest creditor, was there to survey the factory to see what he could sell off to obtain the money Hermia owes.) When she arrives in front of his apartment at the end of the evening, she is met with a very weak Kang Min Ho—so weak, he comes to the door seemingly forgetting he had called her over, before collapsing on top of her.

When he receives the heart from Kim Soon Jung‘s late fiancé, it makes things even more interesting than the initial hate-hate relationship already is. Firstly, Kang Min Ho isn’t aware that the heart he receives belongs to the very person he not long ago got into a fight with (i.e. Ma Dong Wook), and he also doesn’t know that the person is related to the two people he not long ago threatened and alienated (i.e. Kim Soon Jung and Ma Tae Seok). When he finds out, it becomes very interesting as we watch to see how everyone deals with it. Secondly, when Kim Soon Jung falls for Kang Min Ho, does she like him because of Kang Min Ho or is it because of Ma Dong Wook who seems to live inside of Kang Min Ho? With Kang Min Ho, does he genuinely like Kim Soon Jung or is it that the heart belonging to the person who loved her making him feel the way he feels towards her?

So, before the heart transplant, it’s already interesting because of the history between their fathers, the ‘hate’ as well as the contrasting images which Kang Min Ho presents to Kim Soon Jung and the world. Add in the heart transplant which has Kang Min Ho take on some traits of Kim Soon Jung‘s late fiancé and it makes for a very interesting romance arc!

Not only does the heart transplant make for an interesting romance arc, but it makes for an interesting story in general. The memory of the hit-and-run that’s now apart of Kang Min Ho is quite obviously not just a dream, but a memory of Ma Dong Wook during the moments after the hit-and-run before his death. After investigations comes up empty, resulting in the case being closed. The memory holds the one lead that will lead to and reveal the culprit. Who the culprit is, it’s not hard to guess and in fact is revealed early on in the story, but with no evidence to prove he did it, the culprit gets off scot-free. It’s just a matter of time though: Kang Min Ho just needs to realise that his dream is actually a memory and discover the lead.

We love dramas like this where the crime has already happened early on in the drama and we’re not made to see the bad guy commit crime after crime, keeping us worried about who might die and who might not. That’s not to say, there aren’t times we’re watching the series and worrying if some important character might get it. Even then, the kind of direction Falling for Innocence travels is a good one. You expect it and you want it to happen.

Outside of the story, we just love watching Jung Kyung Ho and Kim So Yeon. We’re not new to Kim So Yeon, we’ve watched one other series of hers, a rather old one called All About Eve, a 2000 Korean drama where she plays second female lead as the ambitious reporter looking to become a prime-time anchor at all cost. All About Eve is the first Asian drama we call our favourite and she played quite the antagonist! It’s nice to have come across another drama of hers after all these years. Jung Kyung Ho, we’re new to. We’ve yet to take a look at his other works, but we’ll be browsing his dramas as well as Kim So Yeon’s. They’re very captivating. They draw us in. They’re big reasons to why we enjoyed Falling for Innocence so much as well.

Lastly, this series is funny, too. It doesn’t look it for the first two episodes with the dramatic opening and all, but after the second episode when Kang Min Ho gets a new heart, he who starts off as ruthless and heartless, becomes quite funny. The scenes between him and his assistant, Oh Woo Sik (Lee Si Eon), are hilarious!

For us, Falling for Innocence is looking to be one of our favourites this year. We had expected this drama to be melodramatic despite it being classified as a romance comedy drama, but it didn’t turn out that way at all. In fact, it’s a relatively light watch—not a lot dramatic moments or angst—as the drama doesn’t come at you with developments that wrench your heart: it doesn’t seem to be about that. It’s more about changing Kang Min Ho and developing the romance arc. What’s more, since the scheming and crime already happened in the the background and within the first two episodes, what’s left is gathering the evidence in the following episodes and catch the overly confident antagonist unaware and dish out what they deserve. We do love dramas this way.

if you haven’t got onto watching this series, we recommend it lots!