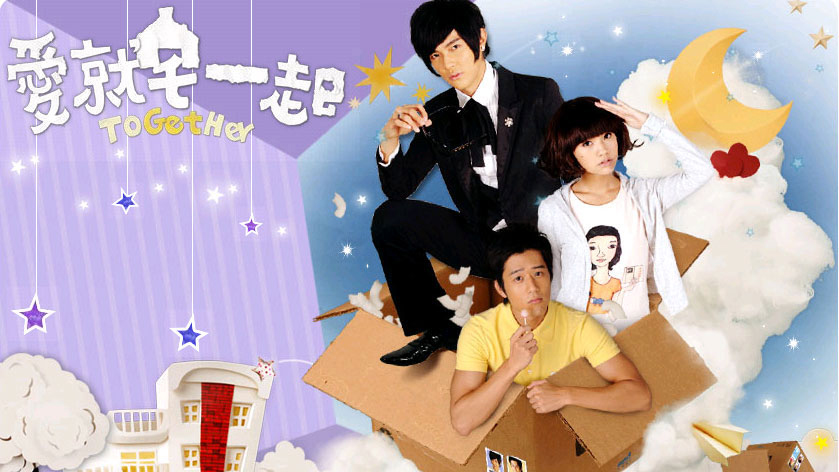 Superstar Express / ToGetHer / 愛就宅一起 is a Taiwanese romance-comedy, starring Jiro Wang, Rainie Yang and George Hu. It’s a very cool series that provides a lot of laughs and a wonderful storyline!

It features a superstar, MARS (Jiro Wang), with failed projects and a string of negative publicity. He is kicked out of the entertainment industry and forced to move out of the company apartment to make way for a fresh talent. With little money due to debts he has to write off, he is forced to rent a room and live with an agoraphobic female landlord, Chen Momo (Rainie Yang), and her shopaholic sister, Chen Chu Chu (Linda Liao). His company manager also enrolls him in a university to study amongst regular people. As MARS learns to accept this new life as a regular nobody, he continues to dream of one day returning to the superstar status he once was.

The story in this series is why we love this series. It talks about superstars and regular people being from different planets and being world’s apart. In the series, the Chen Momo character is a regular person who is a fan of a fictitious manga story called, Prince Kashaba, and it works to be the story of the series. The manga story is told to be about a superhero, Prince Kashaba, who comes from a troubled planet and he comes to Earth looking to find something to reform his planet. While on Earth, he meets a girl, Little Fish, who wants to help him. She donates her love for him to take back with him to help reform his planet.

We just love the depth and meaning behind the story and its characters. MARS’ name, we noticed, is the name of another planet in the solar system which caters very nicely to the story. Very cool!

If you like story plots with celebrity world settings, we recommend watching this series. It is funny and lively. The funny moments do give way to a more serious mood and tone towards the end, but the writers does well to keep the mood and tone from reaching sombre. Jiro Wang, Rainie Yang and George Hu (Wei Jia Sen) were all very good in this series.

And finally, we love this dialogue interaction: