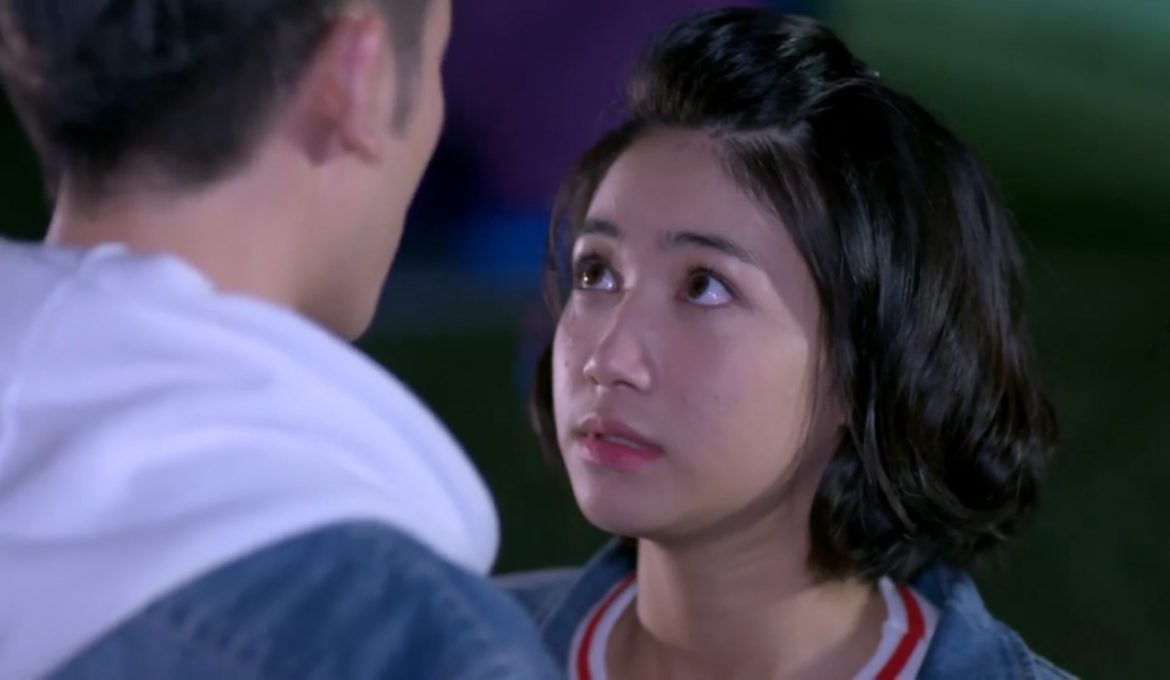 After a kiss that Fang Xiao Rou initiates upon assuming the role of Han Jie and the kiss Han Jie initiated that Fang Xiao Rou responded, Fang Xiao Rou fails to give an affirmative answer to Han Jie’s question of whether or not her answer was a ‘yes’ to being together with him and walks away, embarrassed with her actions.

With the huge gesture that he received from Fang Xiao Rou showing her feelings for him, Han Jie seems to not be concerned with the uncertain answer that Fang Xiao Rou gave to his answer this time, seemingly able to wait just that bit longer for Fang Xiao Rou’s answer. Han Jie doesn’t have to wait too long this time. Fortunately for Han Jie, Wei Qi Zhen had been walking in front of Fang Xiao Rou between classes the next day and helps Fang Xiao Rou make up her mind after Fang Xiao Rou, yet again, goes on her bad habit with hiding herself behind Wei Qi Zhen from Han Jie’s eyes when she spots him with a couple of students walking before her. With her situation with Wang Mai Zhi in mind, Wei Qi Zhen lets Fang Xiao Rou realise how lucky she is to have someone as cool and good-looking as Han Jie liking her when the person that she likes has a chance that is lower than the chance of winning the lottery. That chance being zero. Wei Qi Zhen convinces Fang Xiao Rou to take action and stop being indecisive when she tells her how important it is to take up the opportunity to spend the time with the person who you like who also wants to spend time with you because, unlike her, it’s difficult when the person you like shoos you away like an annoying fly.

It’s words Han Jie wants to hear. Wei Qi Zhen’s words seemingly having made a lot of impact on Fang Xiao Rou, Fang Xiao Rou thanks Han Jie for liking someone like her who has many faults about her. She then asks him to allow her to be his girlfriend. Fang Xiao Rou’s answer sounds sincere and perfect; and the atmosphere she has created for this moment is perfect also—lights decorate the forest tree and petals she let flow from a red papier mâché ball created a sweet and romantic atmosphere. But it seems Han Jie wishes for just a touch more so to make all of this complete: a kiss she initiates—not one as Han Jie like the one on the previous night, but one as herself—as Fang Xiao Rou. Han Jie closes his eyes and stays still. He waits. Fang Xiao Rou understands the request and prepares herself to kiss Han Jie; however, her numb legs doesn’t want to cooperate with her and allow her to get to him to kiss him. This problem that caused a delay has Han Jie wait just that bit longer to receive Fang Xiao Rou’s kiss when Ma Chong Sheng and Liu Xuan come running towards them informing them that Wang Mai Zhi and Wei Qi Zhen has gone missing.

Wang Mai Zhi and Wei Qi Zhen are both okay as Han Jie and Fang Xiao Rou finds out after spotting them sitting on a forest tree log. Han Jie instructs Fang Xiao Rou to leave and return back to the two in a while. It allows not only Wei Qi Zhen some time alone with Wang Mai Zhi—time that Wei Qi Zhen has told to be is difficult to obtain therefore scarce and precious—but also allowing Han Jie to get back to receiving that kiss he wants from Fang Xiao Rou. And Han Jie receives it. He receives Fang Xiao Rou’s kiss after she once more apologises for making him wait for a year and thanking him for waiting for her.

We didn’t expect one more round of Fang Xiao Rou being indecisive. She said, “I don’t know,” after the kisses at the opening scene when Han Jie asked her if the answer was a yes to being together with him. We did say in the previous episode that Fang Xiao Rou’s indecision was getting tedious; but, this one was fine with us. She just made a huge move. Even though she hid behind the game of swapping identities, she did still go out of her comfort zone and did it. Fang Xiao Rou did well to keep Han Jie happy for the meanwhile whilst she made up her mind. So, she can be flustered and indecisive for this one! Haha :oP :oP.

But these relatively less interesting scenes of Fang Xiao Rou and Han Jie did build up to the very cute and sweet scene at the end of the episode! It was playful and light. The exchanges of words were very cool and sweet. We like when Han Jie said that he wanted to be an ordinary guy and not a perfect idol. We like Fang Xiao Rou’s response to Han Jie’s words when she apologises to him for having made him wait for a whole year and then saying thank you to him for waiting for her! Super duper sweet! These words made the kiss that followed very fitting, so very sweet and lovely. This is the best one between the two out of the ones that has happened between them so far.

That dance that Wei Qi Zhen did, it looked so much better when she was accompanied by Wang Mai Zhi! We’d imagine that if she did dance the routine by herself, it wouldn’t have the same effect. It helps that Wang Mai Zhi really looked like a good dancer—of course he would! The actor behind the character is a singer and dances really well in his music videos! (Anyone seen Ben Wu’s music videos for his songs? They’re on YouTube. We checked out a couple back when Love Cuisine was still very new and just getting into its run. Ben Wu really can sing some high notes and his dancing is very sharp!)

The part where Wang Mai Zhi lifts Wei Qi Zhen and spins her around, we don’t suppose that was not part of the original dance routine, was it? How would Wei Qi Zhen do that part by herself? The cartwheel at the end of the routine was very cute and finished it off nicely!

Wang Mai Zhi and Wei Qi Zhen is appearing to get closer with Wang Mai Zhi noticing Wei Qi Zhen’s prettiness. He did a double take when he called her out to get ready to do the dance routine in front of the entire group at the bonfire. But the last scene for these two is simply seeing the two sitting in the forest after Wang Mai Zhi seems to have pretended to have hurt himself from an accident which led them to sit on a log at some location in the wildness. We’re not too sure what to expect from this couple when Wang Mai Zhi just got told he had no chance with Liu Xuan and had said no one matches his class and status except Liu Xuan.

As brief and minor the scenes are, we’re finding that we love watching Li Zhi Chao parts. He’s so funny. But we can’t believe he has such a fickle heart that he could move onto another colleague so easily. Well… actually, it wasn’t so easily if we take into account that he had a year to develop feelings for Jiang Pei Ying with Fang Xiao Rou abroad for a year. He must have been so heartbroken to have not been able to see Fang Xiao Rou that his heart just unknowingly moved to Jiang Pei Ying—Jiang Pei Ying being someone who reminds him of Fang Xiao Rou because she is Fang Xiao Rou’s best friend… Possibly? Anyway… that scene where Li Zhi Chao tries to put his charm on Han Jie was so funny! Unfortunately, Li Zhi Chao gets heartbroken with his inability to get Han Jie charmed by him. Poor Li Zhi Chao! He just wants to charm, charm, charm! Haha. We think charming Han Jie would be a LOT harder than trying to charm Jiang Pei Ying—the actual person he wants to charm! Whatever got Li Zhi Chao the idea that he would find it easier to charm Han Jie or even just try charming Han Jie, we really want to know! This scene made us recall the funny scenes between the actors in the BTSs, particularly Episode 4 BTS. It was Calvin Lee and Lego Li galore in that BTS!

This episode was good. Definitely still looking forward to Wei Qi Zhen and Wang Mai Zhi! Even though we want more focus on Wang Mai Zhi and Wei Qi Zhen, we still want to see Han Jie and Fang Xiao Rou! We want cute and fun scenes for them, though! We wonder what is next for them now that they are officially a couple. :oD :oD.