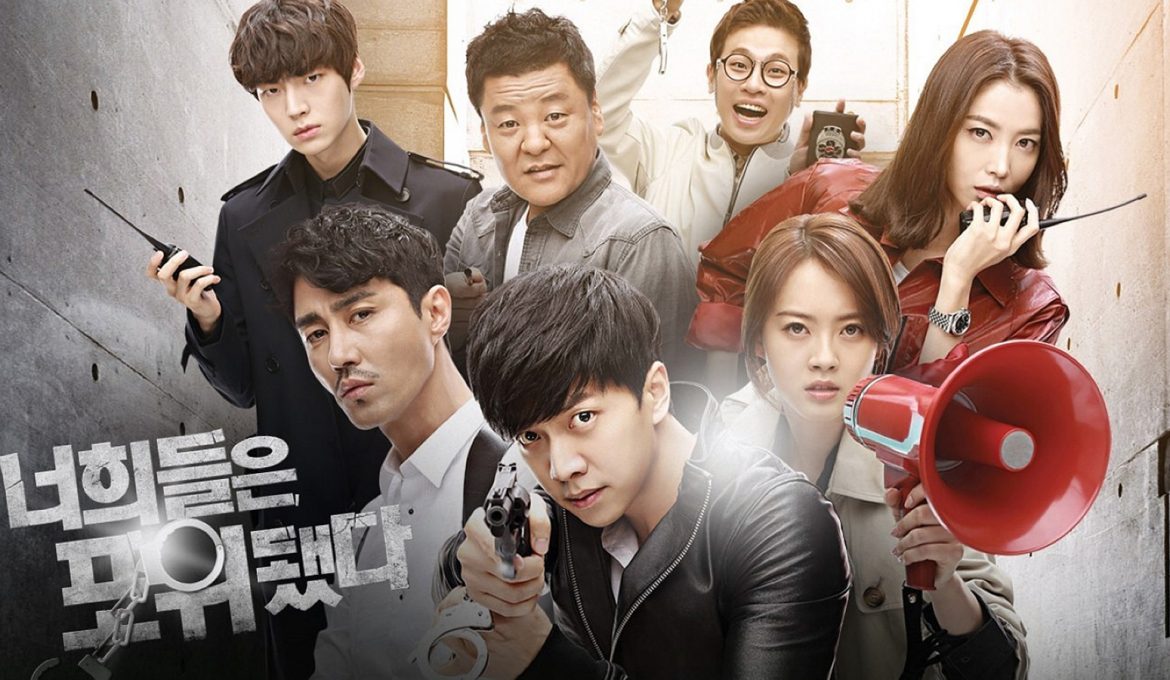 Korean action/comedy/romance series, You’re All Surrounded / 너희들은 포위됐다 , focusing on an unsolved murder case spanning 11 years had us from the opening scene with the car chase to the end as it uncovered the perpetrators and their motivations. And so, this is our latest Asian drama recommendation!

This series has great pacing. It knows exactly where it’s going as well as when to bring it in. We’re quite impressed with how well this series does everything. The 11-year murder case and all the perpetrators remained the main focus of the story, but just occasionally, the writers will subtly slip in comedic light relief and relationship development between Eo Soo Sun (Go Ara) and Eun Dae Gu/Kim Ji Yong (Lee Seung Gi).

The hidden identity of the “man in the boots” which was set as the man behind the murder of Eun Dae Gu‘s mother was quickly revealed and dealt with so well, too. We love that the series didn’t choose to hide the identity till the end to carry the series through the 20-episodes. Instead, the series had him revealed and caught by Eun Dae Gu himself. We loved this move of the writer. It’s very refreshing: too many series like it have the perpetrator hanging around and tormenting everyone till the final episode. What You’re All Surrounded did was take out witnesses in its story, making it harder for the case to be solved, which was just as effective in keeping the story moving and remain interesting.

Lead character, Eun Dae Gu, we love this character. He’s quite refreshing. As the son of the deceased nurse in the 11-year-murder case, we expected the character to be closed-off and consumed with carrying out his revenge on the perpetrator like so many similar drama characters before him. Eun Dae Gu is not at all written that way. Eun Dae Gu is rational, strong and quite responsive to people around him despite his tragic past. You get a feeling that he just want answers to who did it and why they did it. Props to the writer for not making Eun Dae Gu revengeful and angsty.

The relationships in You’re All Surrounded also one of the highlights of the series. There’s not just one relationship that captures our attention in the series, there are about four: the relationship between Eun Dae Gu and Violent Crimes Unit Team Leader Seo Pan Seok (played by Cha Seung Won―who, by the way, is so fun to watch!), Eun Dae Gu and Eo Soo Sun, Seo Pan Seok and ex-wife Kim Sa Kyung (Oh Yoon Ah), and the connection between Seo Park Seok, Kim Sa Kyung and Park Tae Il (Ahn Jae Hyun). The many character relationships and their history and connections with each other adds another element of mystery to the You’re All Surrounded story.

There were probably a couple times in the earlier episodes where it felt like random cases were written in to fill in the downtime before the main story re-entered, but once more of the plot was revealed and the main story became the focus, every scene connected to the main story and it became a really great watch. The motivation behind the 11-year murder case is slightly surprising, perhaps a little anti-climatic, but it still didn’t take away anything from how great of a watch it was for us. We just loved the way the series progressed and all the characters and the relationships. (We also love the instrumental soundtrack that’s featured in the series. Love it!)

If you’ve yet to watch this Korean series, we highly recommend watching it! This series has the right amount of action, drama, and romance; perfect characters (in our opinion); and the ending is quite satisfying.