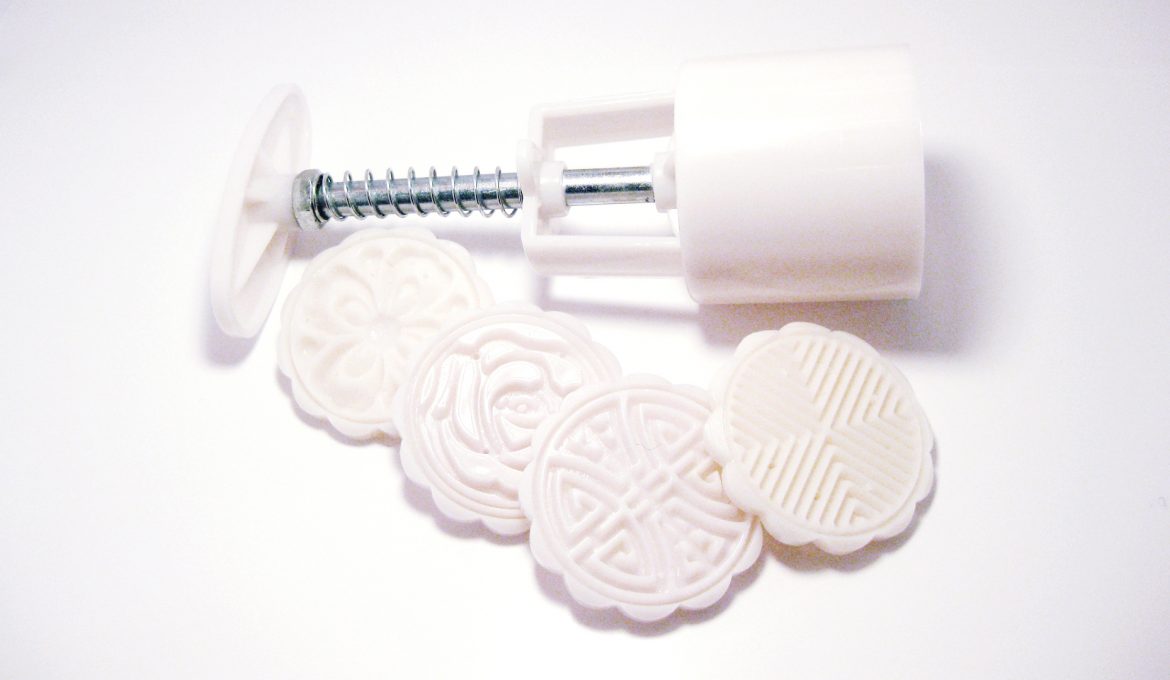 When Autumn Festival was approaching, we decided to make some mooncakes. (Our recipe and directions to make mooncakes can be found here.) We use the traditional mooncake mould, but we found we don’t like using it much: it’s noisy—we don’t like the loud noise that comes from hitting the wooden mould on the countertop to get the mooncake out; the edges of the mooncakes don’t come out as sharp as we like them to be; and the traditional mooncake mould that we have makes the regular-sized mooncakes—a size which is too big for us. We aren’t fond of not being able to eat one mooncake in one sitting—it really is too big for one sitting; and we aren’t fond of needing to find others to help with finishing an entire mooncake.

So, we went searching for mooncake moulds that made smaller mooncakes and is easy to use. We went on Aliexpress.com and found this mechanical mooncake mould.

This mechanical mooncake mould is the 50 g, 4.5 cm diameter mooncake mould. These moulds make mooncakes that are slightly bigger than a quarter of the regular mooncake. It is the perfect size to have in one sitting!

Unlike the traditional wooden mooncake mould where you’re stuck with one design—the design that’s carved into the mould—this plastic mechanical mould allows you to swap out designs with attaching plastic plates that come in all sorts of designs—flowers, patterns, Chinese characters and even cute designs like cartoon characters. We didn’t have the option to choose the designs we wanted with the seller we chose to buy this from not giving us the option to. (We would have loved to get some Chinese character ones.) The images above shows the ones we got—two flower designs and two geometric shape patterns. We do like the design of the first picture (the triangular spiral design one). The pattern looks quite Chinese.

Attaching the plates onto the mechanical mooncake mould is like a jigsaw puzzle at first with not having used one of these before. But, it’s just putting the connectors at the back of the plates into the holes looking like a car windscreen with a square jutting out and turning the lever clockwise to lock it. Once the plate is attached, it’s ready to use. Swapping out to another design is as easy as turning the lever anti-clockwise. The plate drops out and you can attach another one. It’s as simple as that! So simple and easy!

Mooncakes using this mechanical mooncake mould look really good! The first image shows mooncakes that came out of the oven without the egg wash and the other with egg wash. They have very sharp edges and are very professional-looking! We are very pleased!

We definitely love using this mechanical mooncake mould to make mooncakes. It’s extremely easy to use; one mould allows you to create mooncakes with many designs because of the interchangeable plates; and the mooncakes that come from using the mould are beautiful!