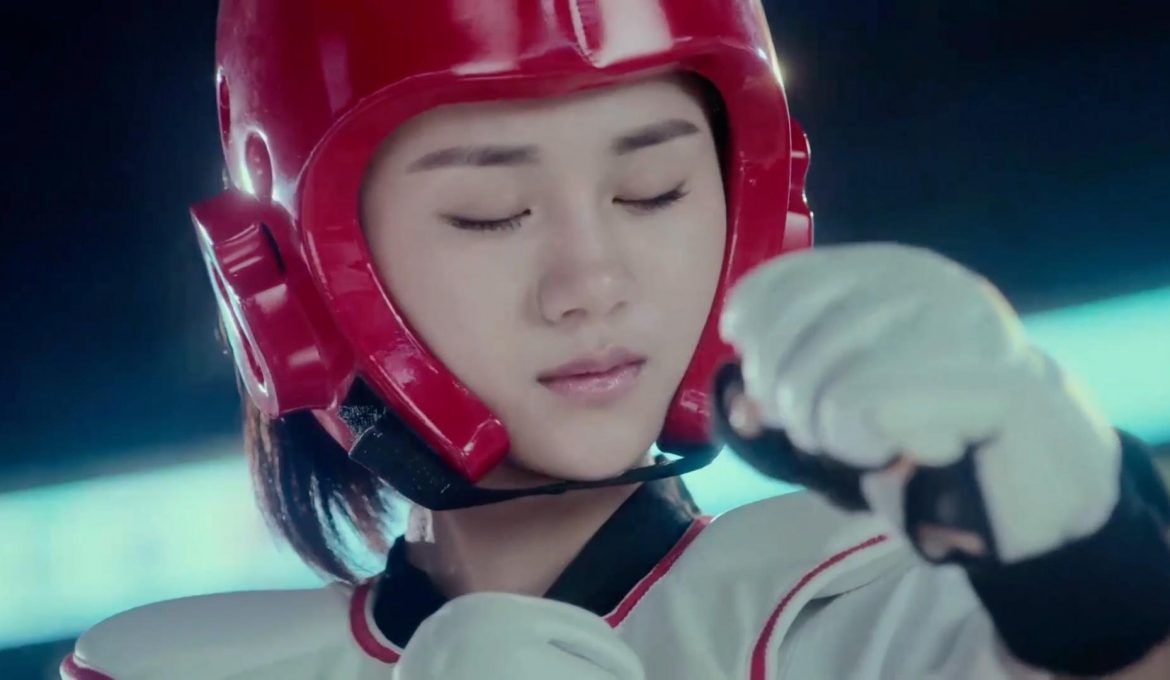 Song Bai’s next competition is against Zheng Xian. As expected, Hu Yi Feng wins the first match for Song Bai. Wu Xiu Da goes up for Song Bai’s second match. It’s determination and will power keeping Wu Xia Da continuing to fight his opponent who keeps knocking him down and when his ankle is sprained in a right angle position.

Yang Rui feels Wu Xiu Da’s pain. He tells him to stop standing back up and admit defeat. Fan Xiao Ying calls Wu Xiu Da to come down. She tells him she can win her match. Wu Xiu Da, however, won’t. He’s determined to continue and win his match.

“I command you to forfeit. Come down. Don’t fight anymore.”

“I won’t forfeit. This is our last chance. I definitely will not forfeit.”

With Song Bai trailing far behind in points, Chang An sees no point in Wu Xiu Da being stubborn.

“Even if you don’t give up, are you able to make up the score?”

“Even if I can’t close in on the score, I will try my best right up to the last second.”

Wu Xiu Da charges at his opponent. A kick from his opponent to Wu Xiu Da’s chest, he gets flung out of the fighting stage. Chang An runs and steadies Wu Xiu Da.

Wu Xiu Da begs Chang An to allow him to go up. He asks Chang An to let him go back in because he can still fight because the match hasn’t ended yet. However, the match is over for Wu Xiu Da and he realises this when he sees the scoreboard say he’s been knocked out. Wu Xiu Da is extremely disappointed with his efforts, devastated to see he is the one to be written down in Song Bai’s history as having brought Song Bai down. That’s until he realises there’s still one match to go for Song Bai and Fan Xiao Ying is the last one to go up against Zhen Xian.

“If you can’t fight, run. If you can’t run then admit defeat. You’re not allowed to act brave.”

“Yi Feng-shiziong, I will win. I must win. I won’t let Song Bai be eliminated.”

“I can. I won’t be like how I was in that match. I will try hard to overcome myself. I must definitely win this match.”

Fan Xiao Ying asks Chang An for his view on this. Chang An has reservations about Qi Bai Cao replacing Fan Xiao Ying. He asks Qi Bai Cao if she truly wants to go up to fight. Qi Bai Cao’s answer is a straightforward ‘yes’. He further makes sure she really wishes to go up and fight and that she is able to fight when she gets up there.

“I want to safeguard Song Bai. It’s so Song Bai doesn’t get eliminated.

“It’s enough just with this goal.”

Chang An is satisfied with Qi Bai Cao’s answer. He lets her go up and fight in place of Fan Xiao Ying.

The match begins. Qi Bai Cao immediately engages in the fight with her opponent. She’s doing well in dodging and kicking away attacks that come her way. The Song Bai gang watch with anticipation as they see Qi Bai Cao go in for an attack with her leg. Unfortunately, Qi Bai Cao hesitates again. She sees Fang Ting Yi in her opponent. Qi Bai Cao falls back.

Yin Yin expresses disappointment in seeing Qi Bai Cao hesitate like this again. Song Ping Ping feels Qi Bai Cao is quite pitiful. Qu Gong Ya wonders if it’s that Qi Bai Cao is forcing herself to go up there for the sake of Song Bai again.

Qi Bai Cao’s opponent come at Qi Bai Cao. She sees Fang Ting Yi approaching her once more. It has her just manage to evade her attacks. Qi Bai Cao is trying hard to overcome her fear of attacking. She tells herself her opponent isn’t Fang Ting Yi. The first round ends with Qi Bai Cao just dodging and avoiding.

The Song Bai gang are careful with their words when Qi Bai Cao returns to their camp dejected. Chang An goes to check on her leg and asks if there’s any pain. Qi Bai Cao doesn’t feel any. Fan Xiao Ying says to Qi Bai Cao it’s okay if she doesn’t win. It’s good enough that she can go up and fight.

Qi Bai Cao wants to win. She’s spurred on by what Fang Ting Yi said during a visit to her at the hospital. In this visit, Fang Ting Yi revealed to Qi Bai Cao that for some time she has been able to stand and walk for a bit thanks to the doctors that Fang Ting Hao brought in from overseas to treat her. This made Qi Bai Cao extremely happy to hear. Fang Ting Yi also expressed how much she loved Yuan Wu Dao and how it’s her dream—one that she won’t give up on and asked Qi Bai Cao to work hard on it together with her.

Qi Bai Cao asks Chang An for help so she can win the match.

The outcome isn’t defeat for Qi Bai Cao. She senses the attacks and evades them skilfully. Sensing her opponent’s position, Qi Bai Cao makes a light tap at her opponent’s chest with her foot and gains a point. Qi Bai Cao wins her match with that one point over her opponent.

“It’s been a long while since we’ve had a victory.”

“Indeed. Only being in the arena are all her cells the most excited and lively. Only when she’s enjoying the victory and when she’s happy is her entire person the most lively.”

The Song Bai gang celebrate with a feast outdoors. Afterwards, while the others go off and enjoy themselves, Qi Bai Cao tells Chang An how much she likes Song Bai and how much she wishes to safeguard Song Bai. With Song Bai being a family to her, on behalf of Ruo Bai who helped her, encouraged her and believed she could get better in Yuan Wu Dao, she wants to safeguard it and keep it from disappearing. Qi Bai Cao asks Chang An to help her continue to train. With Chang An also liking the way Song Bai is now, and also liking the Qi Bai Cao who won’t admit defeat, he agrees to keep persevering with Qi Bai Cao. Privately in his thoughts, Chang An says he hopes he can continue in this way with Qi Bai Cao.

Chang An stumbles upon a method that brings Qi Bai Cao to attack with her eyes opened when he commands her to open her eyes and she doesn’t listen.

Qi Bai Cao finds Chang An leaned towards her and continuing to move closer when she opens her eyes. She attacks Chang An with a kick with eyes opened.

Chang An is pleased he has found an effective method to make Qi Bai Cao launch attacks with her eyes opened. As he resumes launching kicks towards Qi Bai Cao, he instructs her to attack. She’s not allowed to close her eyes. She has to look at him. If she doesn’t, he says she should know what will happen.

Qi Bai Cao sends a kick at Chang An to break the moment and get him away to a comfortable distance. Chang An is hit at his shoulder. Qi Bai Cao innocently asks if that’s counted as a point. Chang An says he will reluctantly say she passed and has gained a point from him. Before ending the training, Chang An reminds Qi Bai Cao to have her eyes opened no matter if it’s in training or in a competition. Qi Bai Cao understands. Qi Bai Cao has to repeat herself to Chang An when she finds him continuing to advance forward. Held in place by a hold of her arm, Qi Bai Cao isn’t able to do anything to stop Chang An advancing. She closes her eyes. It’s this action of Qi Bai Cao’s that gives Chang An reason to lean in and punish her for closing her eyes. He gives a kiss at her left eye. After giving Qi Bai Cao that kiss on her eye, Leaving and faced away from view, Chang An pumps a fist in the air in triumph.

The kiss is on Qi Bai Cao’s mind after training. Catching sight of Chang An’s gift of the carvings of their Song Bai family in her room, she recalls Chang An keeping his promise and bringing a figurine of himself and adding it to the gift. Qi Bai Cao recalls Chang An saying he must be with her at her side to feel at ease and he won’t allow her to be hurt or go missing again.

Qi Bai Cao is jumpy when Chang An goes to her in the main hall with the kiss still on her mind the next day. Chang An has gone to Qi Bai Cao to ask her to go with him to see a Yuan Wu Dao master.

Qi Bai Cao is truly superhuman for being able to fight with her eyes closed. Her abilities are truly way above the rest of the other Song Bai members. We feel Hu Yi Feng is pretty strong and talented, but it feels like Qi Bai Cao is even stronger and more talented than him. Qi Bai Cao would probably come out on top even against Hu Yi Feng. Hu Yi Feng doesn’t come across as having that superhuman quality about him. There’s seemingly nothing Qi Bai Cao can’t master.