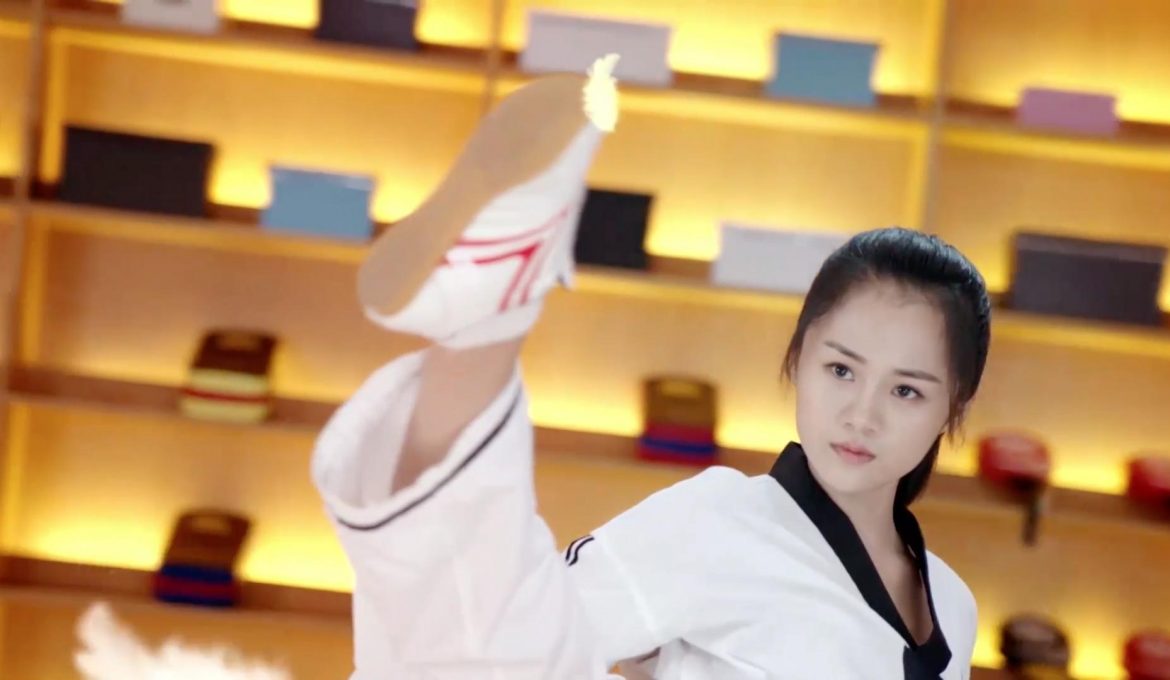 The Yuan Wu Dao master Chang An brings Qi Bai Cao to see is a group of children practicing Yuan Wu Dao. Bringing Qi Bai Cao to see these young Yuan Wu Dao disciples is to show her the heart and mind that they, themselves, all begun with but lost. Chang An says that despite the children’s skills being below those of a Yuan Wu Dao master their state of mind, however, is that of a master. The children only have the thought of kicking their best kick and aren’t concerned by thoughts of success or failure or winning and losing. The children haven’t lost the heart and mind they begun Yuan Wu Dao with unlike themselves where they either have the desire for a swift victory and speedy advancement or they’re overly-cautious from fear of hurting their opponent.

Chang An trains Qi Bai Cao to learn something he calls ‘inch stop’. ‘Inch stop’ is not something Qi Bai Cao understands. Chang An explains that controlling strength can still be done with even being an inch away from an opponent. It’s being one inch from the opponent and being ready and waiting for action, be able to go all out yet also retain some strength and be able to knock out the opponent and stop at a touch. Chang An has Qi Bai Cao practice this with controlling the movement of feathers.

Qi Bai Cao goes into her next match using the new fighting technique. Yin Xiu finds it interesting Chang An has found a way to bring Qi Bai Cao back to fighting normally and come out with another win. The match ends with Qi Bai Cao winning eight points to zero. The Song Bai gang are all optimistic about Song Bai doing well in the Anyang Qualifiers now and believe Qi Bai Cao will snatch away the title of the ‘Most Valuable Player’ from Yin Xiu.

Lu Fei Yu goes to Song Bai with a request to join them. He wants to participate in the Anyang Qualifiers so Feng Yun can be defeated after the way they operated in the Singapore Three Person Competition and the competition in Las Vagas. Feng Yun cancelled points and rankings of those teams that participated last year which resulted in no one except their Song Bai team participating in this year’s competition. The Las Vagas competition which they then took participation in saw them in first place for the three person competition; however, Feng Yun was too strong in the individuals competition and he shows the injuries he has at his foot and head to the Song Bai gang to let them see how strong Feng Yun was.

Chang An doesn’t agree to allow Lu Fei Yu to join Song Bai until Lu Fei Yu says it’s not for vengeance that he wants to join Song Bai. Yuan Wu Dao is something where as long as you like it you can learn. Feng Yun is changing that with operating in a way where only the strongest survive.

Qi Bai Cao hears Chang An tell her about the dream he and Shui Chen Zhou had when he was in Feng Yun. They had the desire to turn Yuan Wu Dao into a professional sport to allow more opportunities for students to participate in competitions. It’s so more people would love Yuan Wu Dao. For this dream, they trained students and organised competitions to bring about Yuan Wu Dao superstars. The Pretty Girl Challenge Competition was one of their promotional ideas.

Qi Bai Cao asks Chang An whether it was during the professional league competition he injured his leg. It was. Chang An says that at that time he’d do anything to help with its promotion. He fought with his leg injury and he got betrayed by Shui Chen Zhou in a match which took him down as the strongest one.

The reason Chang An left Feng Yun was not only because of the leg injury but also because Feng Yun deviated from Feng Yun’s original intention and towards one where Feng Yun’s training methods became ruthless. Feng Yun became a monster and Chang An sees himself to have had a hand in that. Qi Bai Cao finds Shui Chen Zhou could have been at fault and she reasons it with saying people change. She gives the example of Fang Ting Hao who once hated Feng Yun, but now has joined it. She also doesn’t see anything wrong with the professional league when more Yuan Wu Dao students can participate in competitions and allow more love Yuan Wu Dao.

“I hope that if a problem arises and things go off course in the future I can be there with you and we can do our best to change it.”

It’s training time for the Song Bai gang. As they train in pairs, Chang An reminds the Song Bai gang that Yuan Wu Dao is an exercise for all people to keep fit and healthy and all who love it can practice it. Chang An’s attention on Hu Yi Feng, Lu Fei Yu and Wu Xiu Da, he instructs them in using their strengths to win their opponents.

The next round of competitions for Song Bai is a series of wins. Yin Xiu isn’t pleased to hear the announcers say Qi Bai Cao is rivalling her for the title of MVP as she sees herself to be the strongest one.

The degree of coldness and lack of care Fang Ting Hao shows for Shen Bo and Qi Bai Cao has Yin Xiu convinced Fang Ting Hao is truly a person of Feng Yun. She expresses having once thought he was lacking experience to be Feng Yun’s drillmaster and couldn’t see him overseeing the operations of the professional league. However, she has found him very capable as a drillmaster and he proves himself well in handling the operations of the professional league with making it popular all over the country.

Yin Xiu has the desire to bring Feng Yun’s current strongest one, Chen Zhou, down. She asks Fang Ting Hao to join hands with her.

“I know what it is you want to do with staying in Feng Yun. You have your want. I have my want also. Since Chen Zhou was able to pull Chang An down from his position as the strongest one, you and I joining hands can also pull Chen Zhou down.”

“You made my sister into the way she is now. Do you think I’ll join hands with you? I can go get what I want myself.”

In Fang Ting Hao’s eyes, Yin Xiu’s desire to become the strongest one can never happen, however. The strongest one has always been a male. Yin Xiu disagrees. She will take that position and anyone who competes her for it will be crushed by her.

“You watched Grandfather close Xian Wu and went to do things for Feng Yun. Your closest sworn brother went to beg you. Again, you weren’t willing to let go of Feng Yun. You even let Feng Yun use our company’s resources to do business marketing. You left Xian Wu. You left our family. You hurt your friends. Do you really have the heart to do this?”

“I know what I’m saying now is pointless. You won’t listen like how I didn’t listen or care about your feelings back then when I participated in the City Youth Competition. I even fought with you. However, you have to believe me. I was enticed by Feng Yun. Can you not listen to what they say?”

“Do you think I’m a fool like you who always have people deceiving you? Don’t play little tricks anymore and remember to take your medicine. I’ll go find the doctor.”

It looks like Fang Ting Hao has gone into Feng Yun for a goal, but what he’s doing there isn’t entirely revealed in the episode. However, with Yin Xiu saying she knows what it is that he wants by staying in Feng Yun then her proposing that he and her join hands to bring Shui Chen Zhou, these at the very least suggests Fang Ting Hao isn’t wholeheartedly helping Feng Yun, but using Feng Yun to do something. We thought so. Fang Ting Hao has not convincingly gone from the good side to the bad side. He’s just become less friendly to Qi Bai Cao and the others.