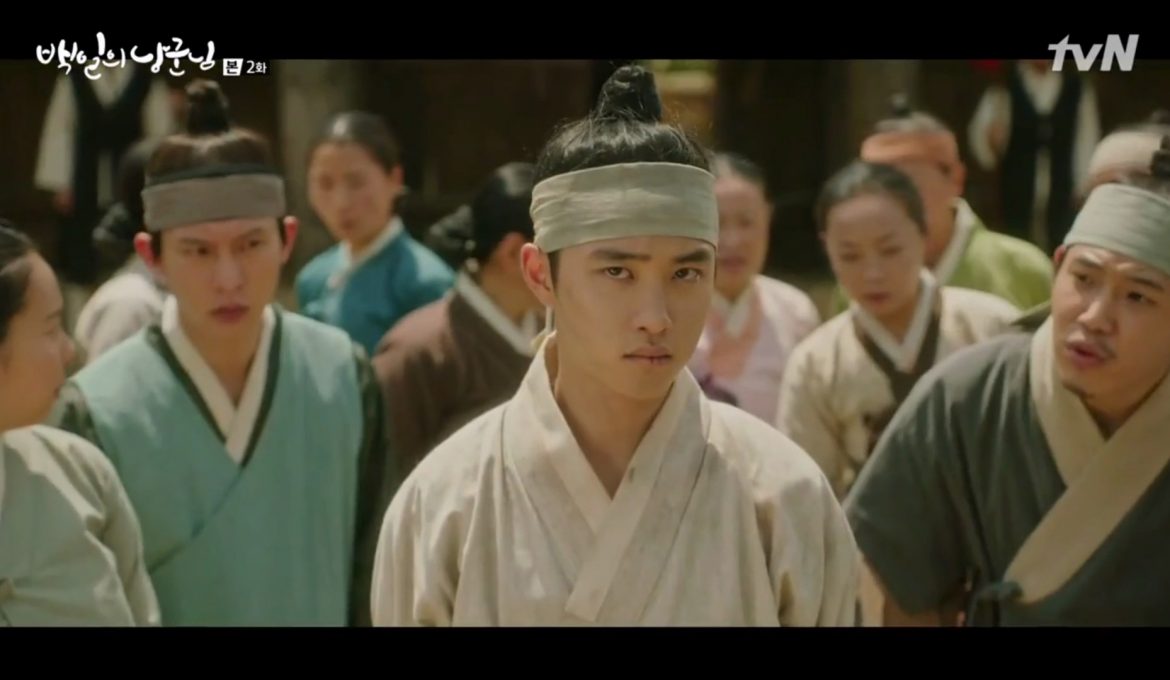 Lee Yul’s found out who’s been trying to poison him and why. Crown Princess Kim Seo Hee is pregnant; and it’s definitely not Lee Yul’s, because according to Lee Yul, they haven’t so much as held hands let alone slept together.

The female physician known as Song Sun (Keum Chae An) had been killed, but investigations Lee Yul received from Capital District Office’s Jung Jae Yoon (Kim Sun Ho) revealed Song Sun had been suspiciously promoted to the Crown Princess’ chambers to serve as her personal physician following a cancelled medical check-up which Lee Yul recall her doing. This led him to investigate the Crown Princess’ medical records which revealed she not only missed one monthly medical check-up, but two. When Lee Yul brings in his own physician to take her pulse, the Crown Princess shows great reluctance and makes up an excuse about having indigestion to avoid it from been read. Lee Yul doesn’t force the matter. He is now sure she is behind his poisoning and her being pregnant is the reason why.

Lee Yul and his entourage is ambushed and shot with arrows during their trek up the mountain to take part in the rain ritual. The attack appears to be a success. Everyone was shot dead and the assassin charged with killing Lee Yul personally saw his shot go into the heart of the Crown Prince. His body is also now over the cliff’s edge and floating lifelessly in the water below.

Lee Yul may not have gone over the cliff’s edge and most likely dead, but he isn’t fearing too much better. Lee Yul was shot, too, and was sent rolling down the hill over a sharp rock which catches his head. Thanks to Hong Shim’s adopted father (who discovers him and brings him back to his place to recover), Lee Yul survives. However, when he wakes, he remembers nothing. He doesn’t know who he is, where he’s from, or how he got hurt.

With Lee Yul having no memory of his own identity, Hong Shim’s father makes him Won Deuk, the guy Hong Shim is engaged to. He didn’t save Lee Yul for this reason, but time had run out for Hong Shim to get married and she was being flogged for still being single. Lee Yul had never mentioned anything about the punishment for anyone who remained single after the deadline, but it was used by the officials at her village because an old clingy nobleman—who goes by the name of Park Sun Do (Ahn Suk Hwan)—wanted to make her his concubine and was using the deadline as an excuse to beat her into agreeing.

Yeon Hong Shim was not a weak woman. She took dozens of beatings and still didn’t submit. She continued to take the floggings till Lee Yul shows up before the town officials and introduced by Hong Shim’s father as the Won Deuk who’s returned from the military and the one Hong Shim said she is marrying.

Hong Shim gets interrogated by Jung Jae Yoon after seeing her dash back on the bridge where both he and Lee Yul were on. It makes Hong Shim think she’s in danger of being discovered. As the daughter of a traitor, she can’t be found. However, the reason for Jung Jae Yoon’s questioning isn’t what she thinks. From that sight of her standing under the cherry blossom tree, Jung Jae Yoon’s developed an interest in her.

Lee Yul uses his birthday to find out who killed the female physician, requesting arrows as gifts. He initially suspected the Queen, but half-brother, Prince Seo Won, didn’t bring the same ones used to kill the female physician. The person who did, the Vice Premier, has Lee Yul wonder why he’d want to kill him. This is how it led Lee Yul to suspecting and investigating the Crown Princess.

Crown Princess tries to get Lee Yul to consummate the marriage and use it as the night the baby in her stomach was conceived. Lee Yul can’t do it, though. He tells her his heart can’t persuade his body to do it. It’s a loveless marriage. Interestingly, the episode reveals it was Lee Yul who had suggested the marriage for show.

Suspecting the Crown Princess at this point, Lee Yul has his own physician take the Crown Princess’ pulse. She, of course, isn’t cooperative, which confirms Lee Yul’s suspicions that she’s pregnant with another man’s baby, and lets her know he knows.

Vice Premier suggests Crown Prince go to the rain ritual in the King’s stead (so Lee Yul can be killed and rid of).

Hong Shim’s dad dreams about a dog who latches on and just won’t let go. It’s a silly nightmare Hong Shim tells him. It’s not. Moments later the person which the dog represents shows up at their door. It’s Park Sun Do. Hong Shim had caught his eye at the magistrate’s office in Episode 1. He wants to make Hong Shim his concubine and plans to by locking her up so she is forced to be his concubine when she faces missing the deadline to get married.

Forced to attend the rain ritual, Lee Yul sets off up the mountain where he is ambushed by assassins. The one who killed the female physician, Song Sun, has his arrows locked on Lee Yul.

With so many assassins around, loyal guard and friend, Dong Joo, isn’t willing to have Lee Yul fight them. Dong Joo sacrifices himself by switching clothes to lead them away and ends up losing his life over the cliff. Although Lee Yul escapes being assassinated, he gets a serious head injury as he rolls over the hill and into a sharp rock.

Hong Shim gets flogged in the morning of the deadline to get married as per the Crown Prince’s orders. News get back to her adopted dad, sending him into a panic to head to the magistrate’s office. An idea suddenly hit him. The amnesiac man he saved (Lee Yul), he could pose as Won Deuk, the man to whom Hong Shim made up is betrothed.