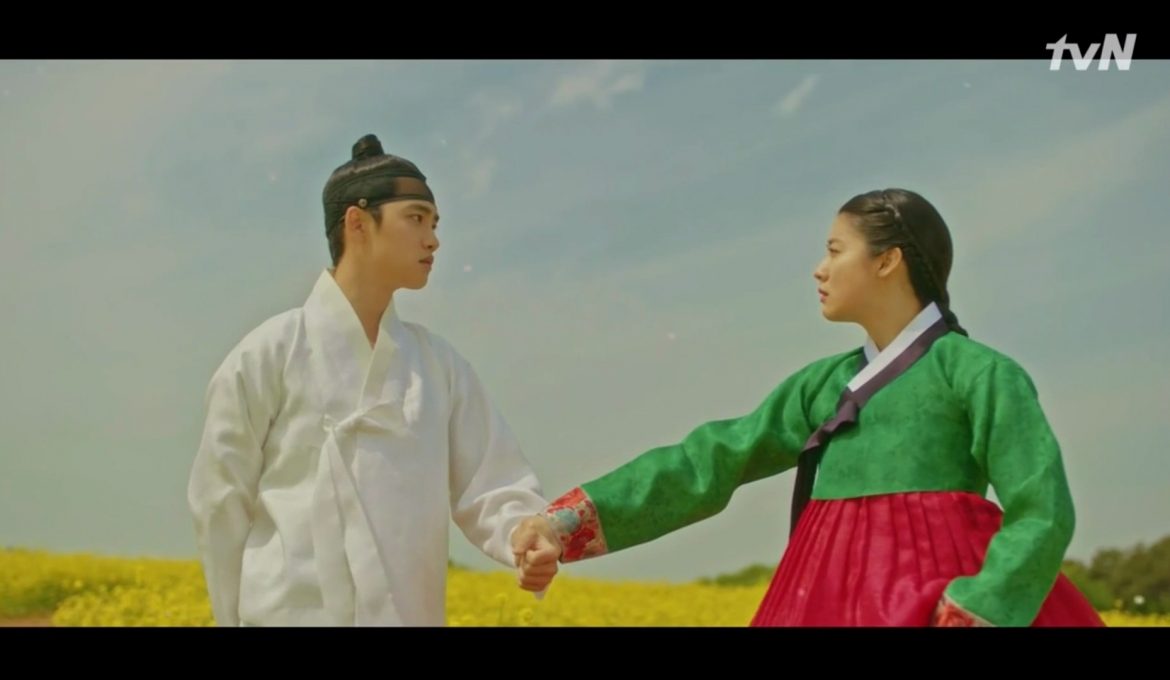 Arriving back at the house with Hong Shim released from the magistrate’s office, Lee Yul expresses how he finds everything uncomfortable. The situation is uncomfortable, the house is uncomfortable and Hong Shim makes Lee Yul uncomfortable. (Lee Yul loves using the word ‘uncomfortable’ to describe pretty much anything he doesn’t like. Haha.) He doesn’t think that he would ever propose to someone with a face like Hong Shim, and yet here he was being told he was marrying her.

Lee Yul disappears from their sight for a good time shortly after. Hong Shim’s father had tried to get him washed up for the wedding at a nearby river, but apparently, jumping in there to clean himself is not good enough. Lee Yul may have lost his memory of who he is, but he’s not forgotten his taste for luxury. Wandering through the village, the clothes of nobleman, the palanquins, and the nice houses catch his eyes. Seeing servants carry water into a bathing room of a nobleman’s house has him strut on in to wash up, change into clean white shirt and trousers that was hanging there before stealing a feast at Park Sun Do’s place (in Lee Yul’s view, though, he’s just eating what’s he thinks is his to eat).

Yeon Hong Shim finds Lee Yul just in time to stop him from revealing anything to Park Sun Do that might get Park Sun Do back on making Hong Shim his concubine.

Almost time to marry, Hong Shim is dressed up but Lee Yul is still showing no signs of going along with this story where he and Hong Shim are a pair. After one of the villagers, Gu Do (Kim Ki Doo), tries to get him to remember that night Hong Shim had said they spent together at the watermill and failing (of course Gu Dol would since the night never happened), Hong Shim tries to push Lee Yul along by telling him he has little choice but get married since it’s the Crown Prince’s (his own) orders. Either that or get flogged.

The mention of the Crown Prince gets him repeating the name in curiosity, but he’s not going along with either options as they both make him uncomfortable.

Left with no choice, Hong Shim pleads Lee Yul: she may be lowly, but she really doesn’t want to become Park Sun Do’s concubine. Lee Yul still doesn’t move on it. Instead, he suggests they run away. This was not an option for Hong Shim. The way she sees it, no matter where she goes, she’ll be a spinster. If she’s lucky, she’ll get married to a man she doesn’t like or worst-case scenario she becomes a concubine. She also can’t leave with him because her dad will be in trouble.

That seemed to have moved him. Right after the drama’s first couple moment—Yeon Hong Shim tripping as she starts heading to the magistrate’s office alone and Lee Yul catching her by the arm—Lee Yul agrees, surprising her. The two head off towards the magistrate’s office, where we see the second couple moment: Lee Yul captivated by Hong Shim. He didn’t react much when he saw her dressed in her wedding outfit earlier in the day, but whilst she ran through the yellow fields, dragging him by the hand, he looked to have found the sight of her beautiful.

Wedding ceremony underway, clouds form above them, as if rain was about to start pouring. However, as quickly as it formed, the skies cleared. It looks like the marriage between Hong Shim and Lee Yul almost satisfied the heavens to bring rain, but not quite enough.

The wedding night is uncomfortable for the two, with Lee Yul pretty strong about Hong Shim not touching a single hair on his body until his memories return. Rebellious, Hong Shim does the opposite and backs him against the wall and starts undressing him. This leads to Lee Yul pinning Hong Shim down on the ground.

To the villagers who were peeking through, it looked like things were about to get hot and heavy, but nothing of the sort happens. Lee Yul falls asleep in his corner, sitting upright against a wall, whilst Hong Shim lay awake on bedding by the side. There is an undressing to bare skin before the night ended, though. Whilst Lee Yul slept, Hong Shim takes it upon herself to remove all his clothes and hang the white shirt which symbolised their marriage.

The next morning, after a meal with her dad and Won Deuk (we’ll start using Won Deuk until Lee Yul realises who he is), Hong Shim decides she would go visit Won Deuk’s military master to see if she could get something from him. She had found it strange how Won Deuk had served in the military three times but not return with anything. She never gets to her destination as she is stopped by a couple thugs wanting a toll to be paid for the use of the path.

Yeon Hong Shim refuses, and it lands the two inside a straw mat, rolled together. They initially come up with the plan of rolling to get out, but suddenly Won Deuk doesn’t want to roll. He wants to stay rolled like that for a bit.

Back at the palace, Vice Premier’s plan to have the Crown Prince return dead no matter what the situation may be is underway. Palace guards have been sent out to gather evidence of what had happened on Mount Chunwoo where the Crown Prince supposedly went missing. Within the team are two of the Vice Premier’s men trying to rid any evidence that might hinder this plan.

The assassin who killed the female physician, Song Sun, and the one who tried to kill Lee Yul during the ambush is revealed. Hong Shim’s brother, Yoon Seok Ha, is that assassin.

Lee Yul confirms he’s Won Deuk and saves Hong Shim, but not without catching the magistrate’s attention that “Won Deuk” had spoken to him in an official manner.

The Queen puts on an act to the King about how devastated she is with the Crown Prince’s death. She’s actually beside herself that Lee Yul has been attacked and could be dead. Meanwhile, the Crown Princess is quite worried over Lee Yul’s disappearance. It appears she wants Lee Yul to return, but not alive (as expressed in Episode 2).

Lee Yul refuses to wash up in the river. Despite being covered in horse dung, he refuses to wash unless it’s in refined water. He disappears off on his own and finds a clean tub of water with rose petals meant for the nobleman in the house and takes off in the nobleman’s clothes, too!

Whilst he’s out and about, Lee Yul takes it upon himself to enjoy a feast, which happens to be at Park Sun Do’s place.

The run in with Park Sun Do has Lee Yul almost expose Hong Shim’s lie about Won Deuk and her being engaged. He denies wanting to marry Hong Shim, forcing Hong Shim to tell a lie about having spent the night together at the windmill. That earns him a slap across the cheeks from Hong Shim’s dad. Hong Shim’s dad should know this isn’t true, since Won Deuk isn’t Won Deuk. It looks like carrying on the act.

The King couldn’t allow himself to wait around to receive news of Lee Yul and decides to head to Mount Chunwoo himself, only to be stopped by the Vice Premier under the excuse of it being too dangerous for a King to venture out of palace walls as attackers who went after Lee Yul could go after him. Vice Premier is right about that! The men he sent to stop the king as a way to illustrate his point are the very men who went after Lee Yul.

Hong Shim fails to get Won Deuk to save her from being a concubine to Park Sun Do and prepares to accept the situation, until Won Deuk agrees right after a tiny Won Deuk-Hong Shim moment where he catches her fall. Her honest thoughts about becoming a spinster no matter what she did—run away for the time being as Won Deuk had suggested or otherwise—she believed she’d get married to a man she didn’t like (if she’s unlucky) or worse case scenario she becomes a concubine.

When Hong Shim appeared before him earlier all made-up and dressed in a Han Bok, he had very little reaction. However, the sight of her looking back at him as she dragged him along through the barley fields had him captivated.

Marriage night for Won Deuk and Hong Shim. Hong Shim initially doesn’t want to go in, as it doesn’t feel real to her. She is eventually convinced to head inside by her friend, Kkyeut Nyeo. Hong Shim’s told by Won Deuk to not even so much as touch single hair on his body because he still can’t remember his past. Rebellious Hong Shim does the opposite and backs him against the wall in a teasing way and starts undressing him, which has Won Deuk take control of the situation and pin her down. He eventually lets her free after realising what he had done and the position they were in.

Won Deuk and Hong Shim run into thugs demanding a toll be paid for crossing the forest. They refuse, causing them to be rolled up in a straw mat together. It’s a position which Won Deuk suddenly says he doesn’t want to get out of. :oO :oO.