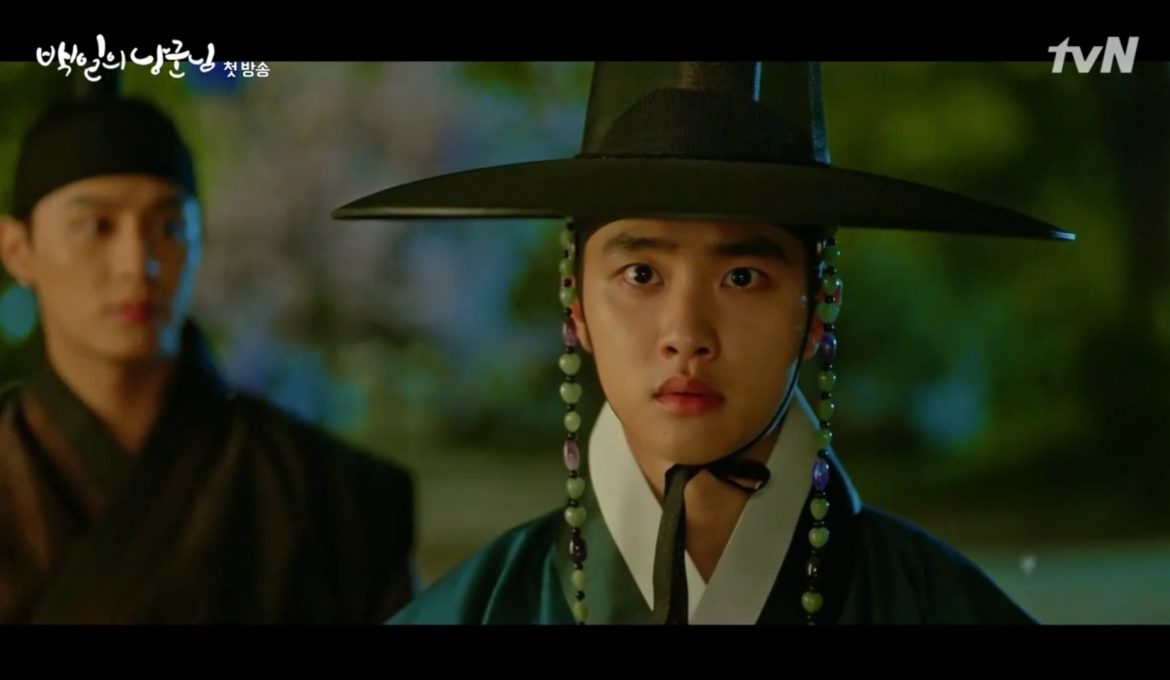 Episode 1 goes back in time to show how Lee Yul (EXO’s D.O. aka Do Kyung Soo) and Yoon Yi Seo (Nam Ji Hyun) met when they were children. He denies falling for her at first sight. However, it seems he might have. He confesses he likes her one night under a cherry blossom tree and that he will marry her.

This relationship never has a chance to blossom as they are soon separated by the Vice Premier’s (Jo Sung Ha) plan to overthrow the current king (Jo Han Chul) and install Lee Yul’s father as the new king. Apparently, in order to overthrow the current king, the whole of Yoon Yi Seo’s family and their servants must be killed, and except for Yoon Yi Seo and her brother who manages to escape the killing, they are all killed.

Jump to present time, Lee Yul has become the Crown Prince. It’s an existence which he classifies as uncomfortable. He’s married to the daughter of the Vice Premier, Kim So Hye (Han So Hee), who he has no interest in consummating their marriage with in order to satisfy the ministers who believe would bring much needed rain and end the drought.

As a way of brushing off the pestering ministers, he orders everyone to marry. No one must be left unmarried. Since they believe in a consummated marriage as having so much power to bring rain, then if everyone in the nation got married then for sure it will end the drought.

Someone’s trying to poison Lee Yul, but who and why is unknown. The one person who knows, a female physician, is killed right before his eyes by an assassin who hid in the shadows. He gave chase to assassin, but loses him near a clothing store where the assassin had changed clothes and snuck away right underneath his nose.

His failed attempt to chase down the assassin leads him to someone he’s been in search for since the dethronement which turned him into a Crown Prince all those years ago: Yoon Yi Seo. Underneath a cherry tree, Yoon Yi Seo (who now goes by the name of Yeon Hong Shim) stands. As he’s never seen the grown version of her before this point in time, he isn’t able to know she is the one he’s looking for, but the sight of her had stopped him in his tracks and had him staring. Before he had a chance to approach her, Hong Shim (we’ll use this name from now on) suddenly takes off.

Lee Yul’s first meeting with Yoon Yi Seo is one which sees her scold the then Son of Prince Neungseon for using his father’s position to bully kids. Yoon Yi Seo is a pretty strong, fearless and intelligent girl.

Vice Premier proposes that the then Prince Neungseon overthrow the King, which later involves killing Yoon Yi Seo’s father and everyone at the residence, forcing Lee Yul to lose two people he loves: his mother and Yoon Yi Seo.

Lee Yul might deny not having fallen for Yoon Yi Seo when they met, but he can’t help stare at the beautiful sight of her when she sits before him with her hair tied up in a bun, adorned with a flower she picked from the ground. At such a young age (though we suppose in those times, it’s not too far off to marrying age), he’s already imagining her being married to him. (Married women have a braided bun, while unmarried woman have a simple braided pigtail.)

Yoon Yi Seo’s father is killed as part of the Vice Premier’s plan to dethrone the king at the time.

Young Lee Yul try to stop Vice Premier from going after Yoon Yi Seo and her brother. When his order is disregarded, and instead met with being picked up and carried out of the area, he tries to plead his father to stop the Vice Premier. To his surprise he learns his father is in on the killing.

Lee Yul’s father becomes king. He seems pretty happy about it, until he learns that the price he paid for taking the throne was losing his wife. She was not only removed from the palace (which he knew was happening), but she was killed.

16 years later, someone’s trying to poison Lee Yul. Who and the reason why are unknown at this point.

Yeon Hong Shim aka Yoon Yi Seo lives as a villager in Songjoo Village. She’s grown up and is still pretty fearless as she is seen confronting some burley thug without backing off.

Kkyeut Nyeo, Hong Shim’s friend, is forced to marry a villager who goes by the name of Gu Dol. The marriage is all because of Lee Yul who handed down an order for everyone to marry in response to the constant nagging from the ministers that he spend some time with the Crown Princess and consummate their marriage. Seeming as they think that his reluctance to engage in the act is the cause of the drought they’re having and the people’s suffering, he figured if everyone were to marry, the skies would bless them all with some rain.

Lee Yul on a lead to find out why he’s being poisoned, leading him to Song Sun, a female physician who has the answer to that question. He never gets that answer as she’s silence with and arrows to the throat by an assassin hiding in the darkness.

Lee Yul gives chase to his assassin and loses him.

Lee Yul doesn’t know it, but following the chase, his childhood love walks past him. He had been searching high and low ever since the incident at her residence.

Lee Yul finally notices Hong Shim standing by a cherry blossom tree. She reminds him so much of Yoon Yi Seo.