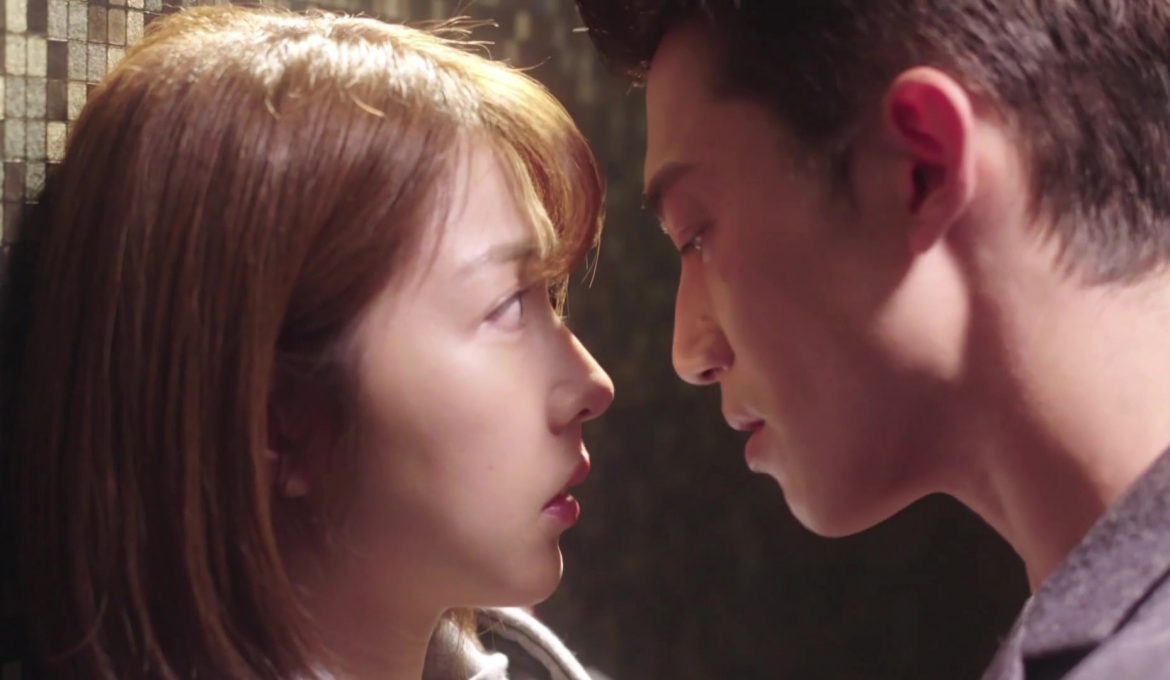 What a huge development for Wei Fen Qing and Huo Ting En in this episode! We didn’t expect it to come in this soon. But, if we take into account of last week’s funny backing-into-the-wall moment, that was a warning/hint the real one was coming!

We can’t really guess what’s coming for the two after what took place in this episode. But maybe Grandma Huo is coming in to be a problem for the pair. There was development in Wei Fen Qing being the daughter of someone Grandma Huo appears to know.

The way we’ve recapped this episode will be different from the way we’ve recapped in the past. We hope it’ll be a much faster read. It should hopefully make revisiting scenes, moments and character, plot and relationship developments in the episode a bit easier. Enjoy!

“Your profile is pretty good-looking. It’s better than your front side.”

“These things shouldn’t be said at a time like this. Though there are no stars today, you—a girl—with me—a guy—standing here looking at the sky—don’t tell me you don’t feel any sort of feelings?”

Huo Ting En is meaning a romantic sort of an atmosphere happening between them. But, Wei Fen Qing doesn’t feel any. She just finds the atmosphere pretty good and ‘okay’.

Some time later after returning from the mountainside, Huo Ting En has an appointment with a consultant for the ambassador banquet at the night market to select street food items for the banquet. The person who turns up is Meng Ru Xi. It’s not Meng Ru Xi’s purposeful act this time, it seems. She says she had no clue Huo Ting En was the person handling the ambassador banquet. She was asked by the consultant to help represent them because they had another appointment and she was qualified to do so after reading her article on the night markets.

“Huo Ting En, you’ve watched too many idol dramas. You just take others away as you please.”

Huo Ting En extends an ‘L’ hand gesture before Ah Wei then brings Wei Fen Qing in to help Ah Wei understand his right to take her away:

“She’s currently on my time. I have some things to say to her.”

“Seeing you standing together with that chicken cutlet guy, I felt really uncomfortable. I don’t know why either.”

“For Wei Fen Qing, don’t you think you should immediately come home? One, it’ll make Dad feel at ease. Two, you’ll then have the status to compete with Huo Ting En.”

Ah Wei is not concerned about Huo Ting En. He feels relaxed about the time he’s allowing Huo Ting En to have with Wei Fen Qing.

“I don’t feel I need to go home to win Huo Ting En. Furthermore, Fen Qing isn’t the type to care about status.”

“I don’t feel that these years of getting along with Fen Qing in small amounts will lose to this uncle who has suddenly appeared. I know these seven days are very important to Fen Qing. It concerns her dream. That’s why I’m giving way to Huo Ting En. But after the seven days, I will continue to be by Fen Qing’s side helping her fulfill her dream. That’s why I’m not afraid.”

Unfortunately, Ah Wei is too relaxed towards allowing Wei Fen Qing to be around Huo Ting En—a guy who has feelings for Wei Fen Qing—as we see later on in the episode. It’s the beginning of losing Wei Fen Qing, it seems. Darn that second male lead label he has!

The remainder of the time at the night market, Wei Fen Qing helps Huo Ting En with his assignment of the ambassador banquet. She introduces Huo Ting En to her night market crew and each of their special skills in Taiwanese street food.

Meng Ru Xi has a talk with Huo Ting En about Wei Fen Qing. She finds his 7-day interaction with Wei Fen Qing to be like the professor and flower seller in the American film classic, ‘My Fair Lady’ and feels he’s brought on a problem that he will need to decide on how he wishes to proceed.

“What will you do after you’ve transformed the woman who sells flowers? Will she continue to remain in the market or will she use her identity as a flower seller to step into high society? What will the Fen Qing you’ve transformed do? There are lots of things one has no way of going back to again once changed. There can only be a new place. What about you? You said you were only going to teach Fen Qing for seven days. After seven days, where will you place her and what is the best course of action for her?”

The problem that Meng Ru Xi has brought to Huo Ting En’s attention goes around in his mind at home whilst making dinner. He’s taken by the thought to the point of momentarily forgetting to tend to the cooking on the stove.

Grandma Huo is impressed with Wei Fen Qing’s eloquence. She wonders who this young lady is. Huo Ting En’s mother tells her about Wei Fen Qing’s famous night market name on the Internet and her ambition to regain her father’s Curry King title.

“I think her surname is Wei. Wei something… Oh! Wei Fen Qing! That was the name. Wei Fen Qing.”

Huo Tian Zhi is unhappy and seemingly at wit’s end with his mother’s spiteful attitude. He shows determination.

“Okay. You said I’m obligated to pay back my deceased father’s debt. There will be a day I will pay you back. I definitely will.”

Wei Fen Qing finds these words in the note Huo Ting En dropped into a food container for her after passing her.

Ah Wei fulfills his other birthday wish. It’s a wish to reveal his feelings to Wei Fen Qing. Ah Wei had prepared the rooftop with decorations the previous day for the occasion.

Ah Wei confesses after celebrating Wei Fen Qing’s pass with karaoke. The response is unexpected. Wei Fen Qing, at first, is stunned. She takes it as how Ah Wei intended the words to come across to her—a confession. But Wei Fen Qing then changes her understanding of Ah Wei’s confession when she finds herself being silly to believe Ah Wei’s words was a confession to her when it could not possibly be because Ah Wei is a buddy of hers. Ah Wei simply follows Wei Fen Qing in this understanding of his confession and plays a game with Wei Fen Qing of being the louder one to say ‘I like you’ and who likes who more.

Huo Ting En confessed during their time at the karaoke. He’d taken her away from the group after showing increasing irritation to seeing Ah Wei being around Wei Fen Qing. His confession had been direct and forceful. Wei Fen Qing had struggled against Huo Ting En’s strength when he forced her to remain trapped in his hold and he kissed her until she yielded and kissed him back.

Wei Fen Qing told Huo Ting En it was her first kiss. She seemed unhappy he’d stolen it from her. Huo Ting En responded with saying it was his first time being so rude to a girl. Wei Fen Qing somewhat didn’t take well to the response.

“What is this? Sexual harassment in the workplace?”

Huo Ting En’s ears had seemed to zone into the word, ‘workplace’. The fact that this day was the last day Wei Fen Qing will be at his workplace seemed to have ran through his mind when he told the following to Wei Fen Qing.

“When today is over, it isn’t anymore. However, I want to say that if you run into any problems out there that you need help with, you’re welcome to come back to La Mure. Come and find me anytime.”

Wei Fen Qing had provided a reflexive response to this. It was rather harsh to the ears. Huo Ting En took it and received it.

“Why should I go find you? I won’t return to La Mure.”

This confession moment concluded with Huo Ting En saying ‘Goodbye’ after they hear Ah Wei calling out Wei Fen Qing’s name out in the hallway where the pair were.

It sounded like quite a final goodbye and Huo Ting En seemed very saddened by the outcome of his confession—possibly more saddened by Wei Fen Qing’s rejection of the kindness and care he offered her. Wei Fen Qing didn’t seem to want it… Maybe Huo Ting En was hoping Wei Fen Qing could see he was wanting her to stay at La Mure… She expressed the absolute opposite instead, though… :’o( :’o( Too shocked from the kiss, we guess. Wei Fen Qing does have a habit of going the opposite way when nervous or freaked out.

The episode concludes with Wei Fen Qing back with the night market crew and Huo Ting En at La Mure continuing with the ambassador banquet. Trained in Western-style cuisine, Huo Ting En and his staff struggle to produce satisfactory Taiwanese street food. Meanwhile, another event seems to be taking place in the evening the ambassador banquet is taking place. It is the Restaurant Association’s annual meeting, organised by Yang Yu Qing’s family. It is to be held at one of the flagship restaurants of Yanis.