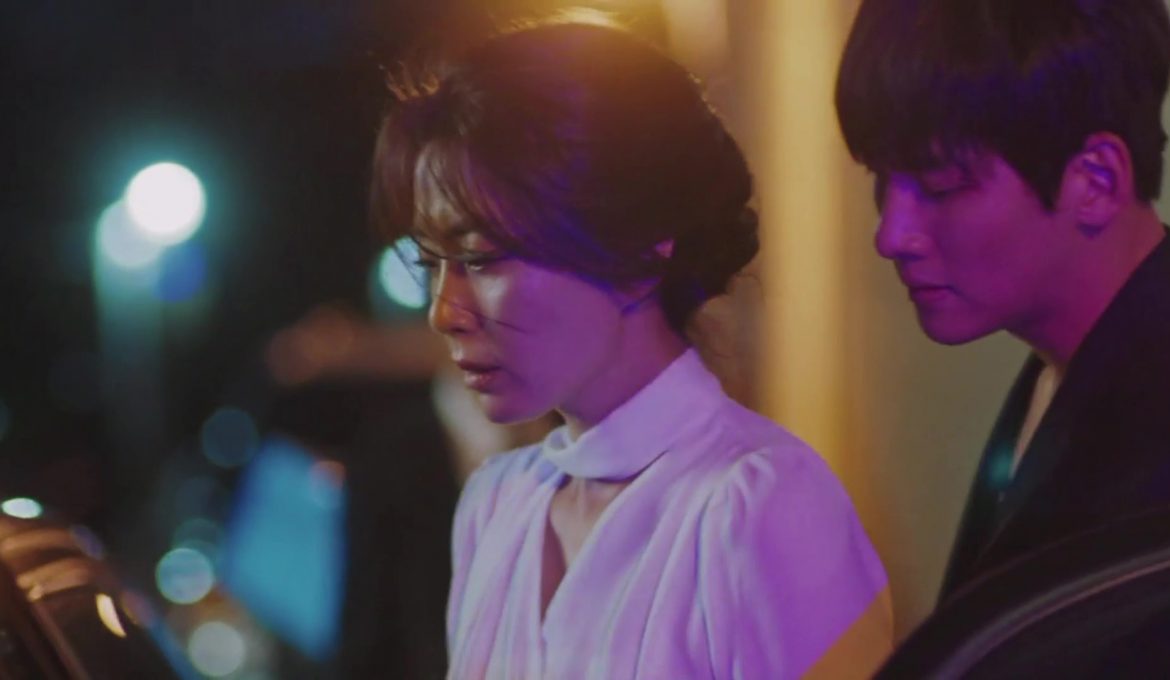 Choi Yoo Jin gets off lightly with Kim Je Ha on their second encounter. It could be said that he never intended to follow through with his threat to kill her, but there are other ways to make her feel like her life’s over: he’s recorded everything she’s said and done, and attached it to an email, set to send in 24 hours’ time to the Press, prosecutors and the Blue House. This email would ruin her.

This has Choi Yoo Jin submit and open negotiations in her car which she orders her people to arrange for her and Kim Je Ha. Kim Je Ha is asked the price for access to the email—which he values to be the same as his life, and seemingly less than hers. When Kim Je Ha asks if her husband would choose her or access to the email account, her silence suggested Jang Se Joon’s choice would be the latter.

The negotiation abruptly stop as they are faced with a group of pursuers on motorbikes. Kim Je Ha mistaken them to be Choi Yoo Jin’s people—they are following them—but the ones on motorbikes are far from being on her side. Very much the opposite as they are out to kill her. They do this by cutting control of her car’s brakes, controlling the speed at which her car travels as well as its destination via remote. The destination being a sharp bend up ahead where they can fake an accident.

Kim Je Ha takes over the driving, weaving in and out of traffic, clipping and overturning traffic at high speed. He’s figured out that although he can’t decrease speed, he can increase it—which is key to breaking free of the remote control of their car. Creating a distance of greater than 20 metres will allow that. His plan is to break free of the remote control long enough to allow the bullet-proof windows to open and fire shots during a skillful U-turn. The plan succeeds and shots are fired, but they don’t take out the riders; however, what it does achieves is alert Choi Yoo Jin’s people (who’s been trail Choi Yoo Jin’s car) to catch on to the situation and take the riders out.

Riders taken out, Choi Yoo Jin and Kim Je Ha’s car finally come to a stop on its roof after becoming airborne from crashing through a road construction site. Kim Je Ha is covered in blood, but survives the high impact crash. He is helped out by a couple of the construction workers on duty before the car catches fire. Choi Yoo Jin is unconscious initially, but wakes upon Kim Je Ha’s calls. It takes him a few tugs of the car door, but he manages to free her from the wreckage and travel quite a distance with her in his arms before the car explodes.

The force of the explosion sends Kim Je Ha down onto his knees, weakening him, but it doesn’t take him out. A piece of flying debris hitting his back is what finally knocks him out, but he holds up just long enough for Choi Yoo Jin’s people to come take her into their care.

Fear is seen in Choi Yoo Jin’s eyes as she watches Kim Je Ha’s bloodied body descend to the ground. No doubt she’s thinking about the email with the video that’s to be sent in 24 hours. He can’t die. Fortunately for her, he doesn’t and makes a quick recovery when they are both taken to the hospital under her orders.

The next half of the episode moves to showing more of Choi Yoo Jin’s power over the media and how an attack on her life can be used by Jang Se Joon to round up more support.

As Choi Yoo Jin is resting up in the hospital, a commentator for a network station takes it upon himself to make insinuations about Jang Se Joon’s political opponent, Assemblyman Park Kwan Soo, being behind the attack without receiving instruction from Choi Yoo Jin herself. It’s an act which pleases Choi Yoo Jin. Seemingly, he’s saved her the trouble of asking him to do exactly that herself. According to Chief Kim, incidents like the attack is often handled by the commentator in such a way.

Jang Se Joon’s response to the attack on Choi Yoo Jin is indifference. In fact, when Chief Joo reported to him about the hostage situation at the home, he was in no hurry to see to it. Only when Chief Joo mentioned that Anna was at the house did Jang Se Joon show concern.

Jang Se Joon is by Choi Yoo Jin’s side, though (if sitting on a couch across the room can be called that); but, it’s not because he’s fraught with worry and concern. It’s so he can come out of her ward looking like he’s been by her side the whole time, fraught with fake concern when the news crew arrive in the morning. He’s present to put on a good show and work the journalists to gather more support for his presidential campaign.

In his performance, he feigns feeling terrible for not being able to do much for his gravely injured wife and looks back to a time when she gave up everything to be a poor politician’s wife. She could have been the heir to her conglomerate and enjoying the priviledges that come with being an heir, but she chose him despite the person he was in his youth. He often got into many political protests which landed him in detention centres. He had a lot of rage against the world. Despite all this, Choi Yoo Jin extended her hand towards him and loved him.

Tears and sympathy flow from the journalists.

Jang Se Joon ends by being ambiguous about whether he is pulling out of the presidential race or not. He vows to fight these forces of evils who threaten their innocent wives and daughters of this land. He tells them that this is possible even without becoming president. The announcement has them all exclaim against Jang Se Joon pulling out of the race before they hoist him up into the air, cheering for the declaration he’s made for the people.

It gets a great reaction from the commentator who helped insinuate political opponent Park Kwan Soo as being behind the attacks. He places Jang Se Joon up on a pedestal like a godly figure: “Please, have strength!” he says to Choi Yoo Jin who he hopes is watching him on TV, “and please, return Candidate Jang Se Joon to us, since he’s our nation’s father!”

As this is happening, Chief Joo has been trying to convince Kim Je Ha to work as a bodyguard for Choi Yoo Jin. Kim Je Ha isn’t interested. This has Chief Joo use the power that Choi Yoo Jin and Je Se Joon has to try convince Kim Je Ha to agree. He tells him that the JSS is not just any normal security company. They are the biggest data centre. They not only have access to JB Group’s deepest and darkest secrets, but also intel on the country’s finance, politics and media. It is with certainty Jang Se Joon will become president based on intel he/JSS has on them. Chief Joo warns that when that happens Kim Je Ha could be executed.

When Kim Je Ha doesn’t budge on the matter of becoming a bodyguard despite the threat to his life, Chief Joo moves to use a position at the Blue House as a way to entice him. He tells Kim Je Ha to join him, at least until the election is over and go to the Blue House. There, he can exact his revenge. This has him curse the Blue House and let out that they are the reason he swore never to return to Korea. He also lets Chief Joo know that he has no interest in revenge.

This revenge which they are referring to looks to be related to what happened to a woman Kim Je Ha offered to help get out of a troubled region. This woman is someone he intended to get married to and take back to Korea, but seemingly never succeeded in doing, as at the end of the episode, we see a flashback to a time where Kim Je Ha is holding a woman in his arms, lifeless. We don’t see her face, but our guess is she’s the same woman he wanted to marry. This flashback comes after Kim Je Ha leaves his meeting with Chief Joo and he sees Jang Se Joon’s political opponent, Park Kwan Soo, in the same elevator with him.

The sight of Park Kwan Soo has Kim Je Ha enraged. He eyes one of his guard’s weapons before he grabs it and starts to take down every one of them. The elevator fills with a bunch of incapacitated guards, blood all over the floor. The episode ends with Kim Je Ha pointing a gun at a cowering Park Kwan Soo.

Park Kwan Soo might be what gives Kim Je Ha reason to join forces with Choi Yoo Jin, since he appears to be someone he really hates.

Very little thoughts about the episode as Episode 3 was sort of more of the same as what we’ve been seeing in the first couple of episodes: just a bit more development on Kim Je Ha’s character and backstory and a bit more of Choi Yoo Jin and Je Se Joon’s power over more important/influential people.

Kim Je Ha’s name is finally mentioned in this episode. It’s not his real name though. His name belongs to someone who went overseas and went missing. It seems, as strong as he is, Kim Je Ha who used to kill without hesitation isn’t like that anymore. He’s got post traumatic syndrome disorder, presumably he developed this after the incident overseas which caused him to lose the woman he wanted to marry (our guess). Her death appears to have something to do with Park Kwan Soo or the Blue House we think.

There’s also a little more on what happened with Choi Yoo Jin’s shares. It looks like she may have temporarily transferred them to her brother, who is looking like he’s doing something with it. That brother of hers looks untrustworthy, like he has some dealings going on between him and political opponent Park Kwan Soo somehow.

The main story hasn’t really come in yet after three episodes. It’s just a lot of isolated scenes and incidents, a lot of dialogue referencing the past and unnamed antagonists. No doubt they will all come together to form the main story, but it’s not apparent what it is, yet. Not being able to see where it is heading or could be heading actually makes it quite a slow drama for us at the moment.

We are still looking forward to seeing the developments, though. Choi Yoo Jin and Kim Je Ha’s relationship should be interesting. Once Kim Je Ha is made Choi Yoo Jin’s bodyguard, we’re sure the drama will pick up very quickly for us!

Just before we end this post, we thought we’d post soem screencaps of the uneasiness seen on guards whenever they’re with Kim Je Ha.

We always find it funny when the guards look back at Kim Je Ha or plead him not to move. They’re really afraid of him. Who wouldn’t be? They may be Korea’s best security personnel, but they’re no match for Kim Je Ha. Amongst this action, political, melodrama, there’s tiny pockets of subtle humour.