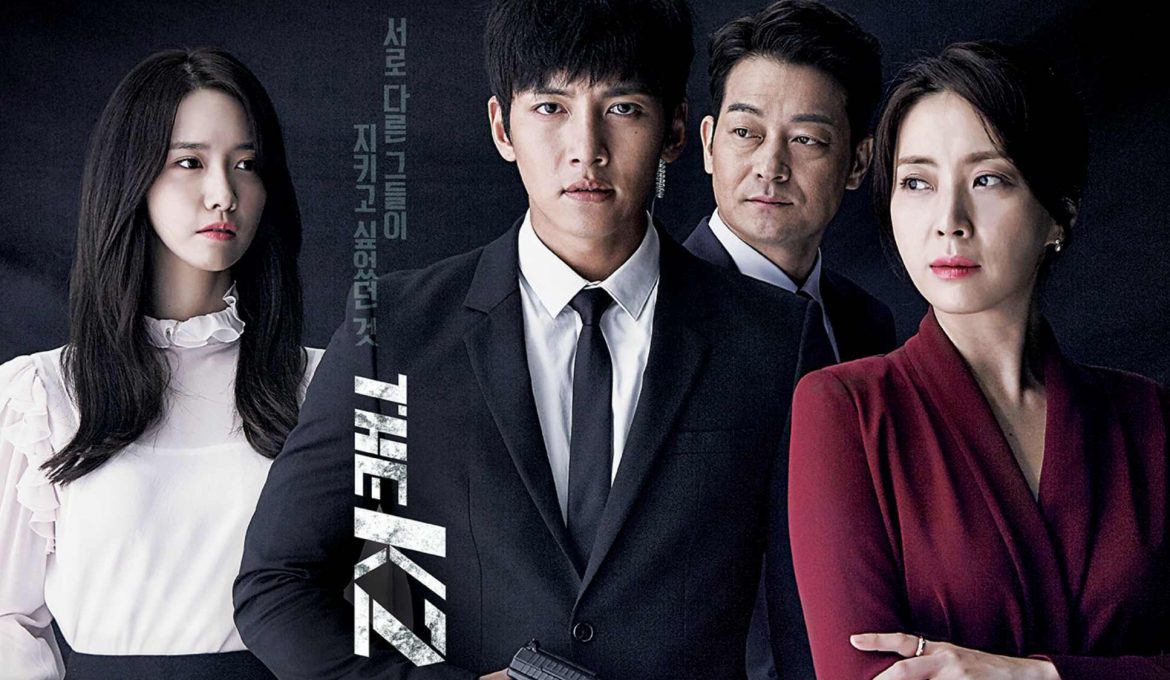 We love Ji Chang Wook. We’ve been fans of his since Healer (2014) and have been catching up with some of his recent works. We’re currently watching him in the Mainland Chinese drama, Whirlwind Girl 2 (2016), as Chang An; and not long ago we finished his 51-episode Korean drama, Empress Ki (2013), where he plays Toghon Temur who later becomes Emperor of the Yuan Dynasty. This drama was awesome. We could not wait to watch more Ji Chang Wook dramas, so it’s great timing The K2 was announced as the new drama he’s doing this year!

The K2 is an action, political, melodrama. Episode 1 opens with a young Ko Anna (Yoona) calling for her parents outside their room. She doesn’t get an answer. This is because her mother is lying unconscious on the floor, having apparently overdosed on sleeping pills. In a flashback later in the episode, it’s shown Ko Anna gave her mother them, but it may all be part of a plan to have the mother taken care of. Her mother is not alone when Ko Anna finds her mother next to a spilt bottle of sleeping pills—an intruder had entered her room through the window. No ill treatment is suffered by Ko Anna.

Mother presumably passed away, Ko Anna is taken in by a church in Spain (the country she resides) where she stays until she becomes a young adult. It’s not a place she wants to stay and so as soon as she grows old enough, she makes her escape, wanting to head to Madrid where her dad is. However, with the police close on her tail, she’s unable to make a break from them. Her attempt to board a train ends with her recaptured despite help from male lead character Kim Je Ha (Ji Chang Wook).

Kim Je Ha has every ability to help her escape from her pursuers. He easily took down the police who was on Ko Anna’s tail on the train platform as well as another two security guards who were on him during his exit from the train station. Helping Ko Anna escape the policeman who had caught her outside probably would have been simple for him, too; but he, too, seemed to be trying to make his escape from his own troubles.

Kim Je Ha’s body is covered in blood when he makes his first appearance onto the screen. He is shown trying hard not to get into any unnecessary confrontations which could attract attention as he made his way to the train station. He ignored the man who tried to grab his attention with a rose and another who tried to engage him in a confrontation because of the first man. Judging by the way the camera’s gaze passes through a CCTV camera in a few shots, Kim Je Ha is on the run from police/government officials.

Time skips six months and we are introduced to a plot to have a half-clad woman drug Assemblyman Jang Se Joon (Cho Seong Ha), have him fall unconscious before filming a scandalous video of him. This was supposed to take place after van-fulls of men in black clothes and glittery blue masks break through Jang Se Joon’s security detail.

However, the intruders get as far as the office of the Social Welfare Promo Team before an alarm is raised. Security detail continue to fall, though, as the intruders continue in their advance.

Outside the window, hanging a window banner, Kim Je Ha witnesses the whole intrusion. An attack on a kind, old cleaner lady has him break through glass that can’t be broken easily. For Kim Je Ha, it’s no problem, though. He swings into the glass which doesn’t break at first, but then he swings back before throwing a sharp tool with enough force it pierces the window and allows his following swing to break it.

Revealed in one of the last scenes of the episode, Kim Je Ha is a highly skilled soldier, trained in the Special Forces. It is no wonder he so easily took down the police and two security guards back in Spain.

Now inside the office, Kim Je Ha makes quick work of the many intruders which the assemblyman’s security detail struggled with. He dwindles them down to only a few before the police arrive onto the scene—at which point they take their retreat, abandoning their plans.

Kim Je Ha’s latest actions has the country’s best security team, JSS, on him (they remind us of the SWAT team). Right after Jang Se Joon makes it out of the building looking perfectly fine and in his car, he’s on the phone to his wife, Choi Yoo Jin (Song Yoon A). He requests she use her influential powers as eldest daughter of Korea’s most powerful conglomerate, JB Group, to have the JSS President handle Kim Je Ha: not only did Kim Je Ha witness the attack inside the office, but he also witnessed the sexual encounter outside his room when he was abseiling down to fix the window banner he was called to urgently tend. Kim Je Ha must be taken down.

The order has Chief Joo, former colonel of the Special Forces, plead the JSS President to rescind the order and get the JSS out of there. He fears the men will all die otherwise. Chief Joo knows this because he trained Kim Je Ha whilst he was in the Special Forces.

The JSS President laughs at Chief Joo’s suggestion that Kim Je Ha is so strong, so highly skilled that even Korea’s elite security team can’t take him down. Laugh he may. The JSS indeed falls one by one under Kim Je Ha when the order is carried through. Fortunately, Kim Je Ha spared their lives and chose to disable them so he could make his get-away—to Chief Joo’s relief.

Wow! Those stunts Ji Chang Wook does (we assume he does them since in the shots it looks mighty like him in them) look so awesome.

And what about that bloodied look of Ji Chang Wook’s? When he appeared onto the screen, we had to take a few moments to look at the screen to make sure the character we were seeing was the character Ji Chang Wook was playing. Ji Chang Wook’s last three dramas, Healer (2014), Whirlwind Girl 2 (2016) and this one, The K2 (2016) have all had him hitting, punching, leaping, doing some form of martial arts/hand-to-hand combat. He’s fast becoming an action star we think!

Anyway, Episode 1 is off to a great start, action-wise! The episode looks to have most focused on developing scenes to show us how highly/dangerously skilled Kim Je Ha is. We got a lot of scenes where we see Kim Je Ha fights off the best security detail there is and having no fear when it comes to leaping over the edge of high rise buildings to hang banner. There’s not a lot developed in terms of why Ko Anna is being chased down, why she’s on the run, nor do we know why Kim Je Ha looks like he’s trying to keep a low profile back in Spain, though.

There are other minor details in the opening episode which seem to be important, like the marking/scars on the wrist of one of the blue-masked men which Kim Je Ha was seen to notice during his attack on him.

We’re not too sure what to expect story-wise, since there wasn’t a lot to go on in the opening episode. Kim Je Ha is supposed to come in as a guard for Choi Yoo Jin according to a brief synopsis we read on the drama, so we suppose in the next episode or two, it will concentrate on reining in Kim Je Ha so somehow he is made to be a guard.

We’re hoping the action keeps on coming, ’cause we’re loving it!