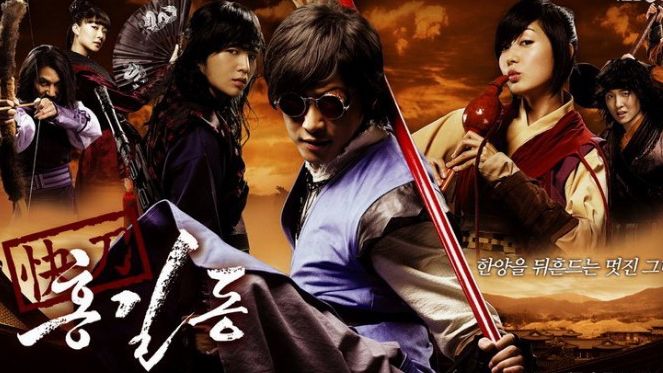 Asian period/historical series, we’ve seen quite a number in this genre. We occasionally watch this genre for the action and the plotline (when it doesn’t drag on too much). For us, they are only great to watch once. Often they do not make quite enough of an impression for us to watch them a second time.

In this latest blog entry, we’re going to continue with our second listing of our All-Time Favourite Asian Series. This next one is not only a historical/period series, but it is one that we’d happily watch once then rewind and watch again and again.

The KBS2 series, Hong Gil Dong, is our next entry in our All-Time Favourite Asian Series.

Set in historical Korea, Hong Gil Dong focuses on inequality and the power struggle that exist in society. Down below is society’s poor. They are impoverished, hungry and powerless to effect change to better their situation. Up above are the government ministers and noblemen who live in extravagance from bribes received from the people; and further up is their King, a mad dictator who is more concerned with using his power to serve his own needs and desires than improve the dire circumstances of his people—a world which the king himself created.

Society is in desperate need of a hero. That hero is Hong Gil Dong.

He is a highly intelligent person capable of serving under his King as a government official with exceptional martial arts skills. However, because he has been illegitimately conceived to his late mother who was a slave, in the eyes of the law, he can only be recognized as a slave and not the son of a nobleman. His status in society affords him no power or choice to become anyone in society. He takes on the role of a nuisance to those around him. He visits brothels and gambles, and he lets people use him as an escape-goat when their scheming goes amiss. But when an incident very nearly ends his life, he returns to take on those in power, leading the charge to bring rise to a new king.

Head of a merchant organisation and the supposedly deceased prince, rightful heir to the throne. He has little regard for human life and has no qualms about taking a sword to anyone who stands in his way.

They are great allies as well as opponents. When their intersecting goals lead to an alliance, it brings out the best in the prince and recognition of Hong Gil Dong’s skills and worth; but their alliance with each other also provides great tension in the power struggle storyline: although they are working towards similar present goals (to bring rise to a new king for Hong Gil Dong; and to overthrow the current king and take his place on the throne for the prince), it is clear that once this goal is achieved, one side must be defeated to achieve their main goal (for Hong Gil Dong, it’s to create a society where everyone is equal—where the people do not serve a king; and for the prince, it is to preserve the position of king as ruler of the people). Their alliance is a fragile one and can only ever be temporary.

Losing a bet during one of Yi Nok and her grandfather’s attempt to sell their medicine, Yi Nok is hassled to keep her end of the bargain and marry Gil Dong. Initially, she sees Gil Dong as a nuisance and ‘bad luck’, but he quickly grows on her and feelings develop.

Yi Nok has always found Chang Hwi handsome. First impressions made no impact on Chang Hwi, however. The only thing on his mind is his mission to claim what is rightfully his. Yi Nok is like everyone else to him: pose a threat to his plans and he will not hesitate to take a sword to her. Chance meetings (as well as not-so-chance-meetings) create opportunities for a change of the heart in the cold prince. He finds himself desiring her heart. His only obstacle, Gil Dong.

This series is not the typical period/historical series: Hong Gil Dong is very cool, unique and captivating. From the very first scene it captured us. It begins with a royal celebration for the King’s birthday, featuring a dance performance. This dance is nothing like what we’ve been used to seeing in period/historical series: the women aren’t daintily twirling for the King; they’re performing—what we believe is—jazz-funk with a bit of breaking. (Anyone who is knowledgeable about dance styles is welcome to correct us if we’re wrong.) Listen to the soundtrack used in this opening scene and it’s also very modern. For us, this fusion of traditional and modern elements in a period/historical series makes Hong Gil Dong super cool.

As serious as the main story of the series is, Hong Gil Dong is actually rather funny. Amongst the plotting, scheming and bloodshed in the struggle for power, there are lighter moments in this series where it switches its focus on the funny antics of its characters. It keeps the atmosphere of the story balanced, avoid being overly serious or depressing like some period/historical series we’ve seen in the past.

For us, Hong Gil Dong is the full package. Hong Gil Dong encompasses everything we like to watch and see happen in a series. It has a captivating story, great humour, drama, martial arts; and to boot, it has the coolest soundtrack we’ve ever heard in a historical/period drama. This is one awesome series.