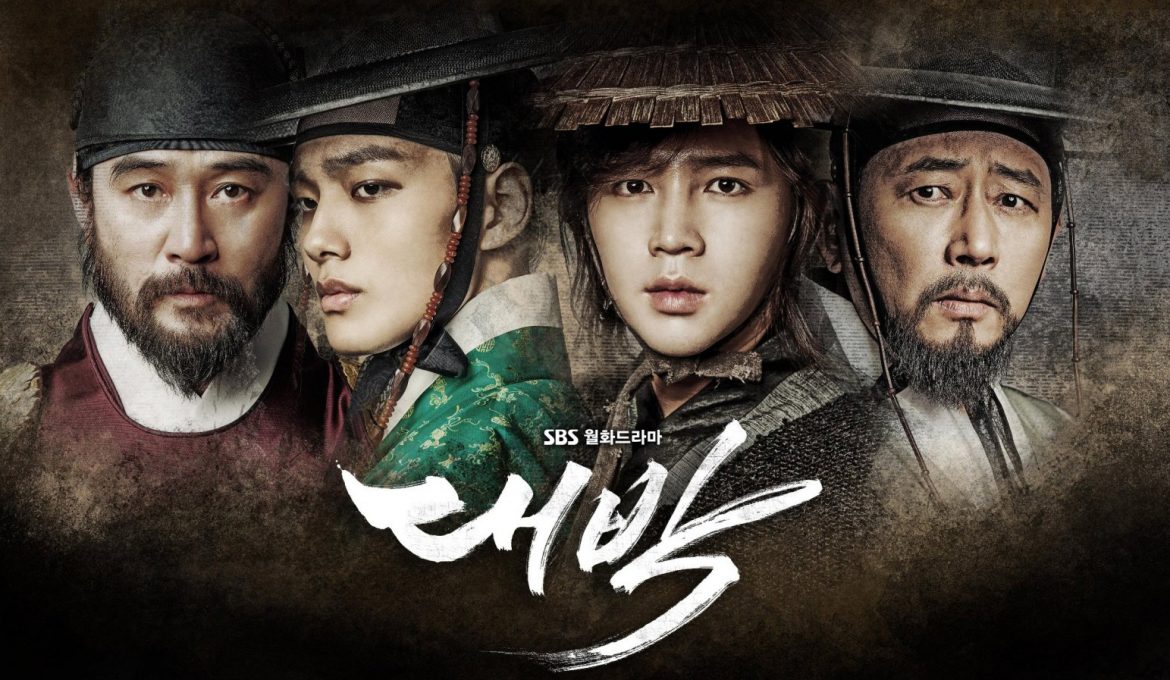 Jang Geun Suk’s back with a new drama, Daebak / 대박 (also known as Jackpot, The Royal Gambler), and what a great drama to come back with after being away from one for so long! Daebak is a historical drama set in the Joseon era. Jang Geun Suk plays Baek Dae Gil (born Prince Yeong Soo), son to King Suk Jong and former palace water maid, Choi Bok Soon (who later becomes Lady Choi Suk Bin).

Baek Dae Gil arrives into the world as part of Yi In Jwa’s plan to take control of the throne. It’s a very elaborate, precise plan. It involves appealing to Choi Bok Soon’s discontent over her husband, Baek Man Geum, who is always gambling away everything of value (money, his noble status, wedding rings and even Choi Bok Soon herself: this is how Baek Man Geum lost Choi Bok Soon to the king) as well as appealing to her impoverish existence, getting her to catch the king’s heart before having her give birth to Baek Dae Gil. His birth, which comes about six months premature, is then used to start a rumour about being another man’s son and create the opportunity for Yi In Jwa to have the Queen ousted and the young Crown Prince Yoon under his control.

Fearing her baby faces death staying in the palace, Choi Bok Soon switches him out with a deceased baby infected by the plague and sends him to former husband Baek Man Geum. Queen Jang Ok Jeong tries to prove Baek Dae Gil (or Prince Yeong Soo as he was known in the palace) isn’t dead and he’s not the king’s son by bringing in Choi Bok Soon’s former husband for interrogation in front of an audience, but it results in her dethronement and exile after her failure to prove the rumours true. This leaves Queen Jang Ok Jeong’s son, the young Crown Prince Yoon, free for Yi In Jwa to manipulate into expressing handing over the throne to him in return for his protection.

Yi In Jwa’s scheming is for the Great Cause. He claims wanting to bring rise to a king who will serve the Joseon people and rid corruption that exist up top, but in order to achieve it, he isn’t afraid to sacrifice the lives of those innocent Joseon people he claims he is doing this for. This puts a question on whether it’s for the Joseon people, for power or because he holds a grudge against the king for killing his family in Gapsul Hwanguk Change of State.

Twenty years later, this elaborate plan continues. After hearing about Baek Dae Gil’s existence through information from Hong Mae, a gambling den owner, Yi In Jwa sets about provoking Baek Dae Gil to rid his weak, immature, delinquent ways to become strong with hopes Baek Dae Gil will be used to take on the king and the threat of possible heir to the throne, Prince Yeoning (King Sukjong and Choi Bok Soon’s second son). He has Baek Dae Gil’s father killed in front of his eyes, creating a desire in Baek Dae Gil to take revenge against Yi In Jwa.

Baek Dae Gil’s attempts at revenge gets him shot in the chest, stabbed in the heart and over a cliff. Not many would survive this kind of attack on their lives, but Baek Dae Gil is born with a king’s fate. It is a fate so strong he could become king. After the fall, he washes up on the shore buried up to his neck with sand. He meets an imperial guard with unmatched sword and archery skills. Under him, Baek Dae Gil master these skills and also becomes a master gambler using the newly developed senses gained from his training, which helps him undermine and defeat every one of his opponents on the gambling table. (Gambling and gambling with fate is a major feature of this drama.)

So, Baek Dae Gil returns a Great Tiger with the skills to take down anyone and anything, just as Yi In Jwa had hoped. But he is mistaken if he had hoped to use him to realise his Great Cause and take down the current crown or future crowns.

What a great drama for Jang Geun Suk to come back with! Ever since we saw him in Hong Gil Dong (2008) as second lead Prince Chang Hwi, we’ve been wondering if he’d ever do another historical drama. The historical genre is what got us started in following Jang Geun Suk. The historical genre is also the genre we think shows his skills so much more than those idol dramas he did after Hong Gil Dong. We loved him in You’re Beautiful (2011), but we have to say after You’re Beautiful, none of his following dramas managed to catch on with us. Despite that, we never stopped following his work as we held onto hope of seeing him in a good drama that will show off his skills we can tell he has.

In Daebak, Jang Geun Suk shined! We love how he really got down and dirty in this drama and ditched the pretty, handsome look some of his past characters were. He is so much more interesting to watch playing a character like Baek Dae Gil. Baek Dae Gil is straggly; the way he prances around with his arms flailing at times, makes him comes off as a slow-witted kind of character. It’s quite a contrast.

Jang Geun Suk showed how committed he can be to his craft in this drama. It surprised us. He was buried in mud up to his neck; he ate sludge, chewed on a crab covered in mud which looked like it was still alive. He also ate a snake. He yanked it right off the tree and just started skinning it before chewing the flesh! We have a whole newfound respect for Jang Geun Suk!

Daebak doesn’t really feature a romance arc, which is different to a good number of historical dramas we’ve seen. There was the pairing of Dam Seo and Baek Dae Gil, but it never took off as she was a student of Yi In Jwa as well as being his adopted daughter. There was also the fact that Prince Yeoning took a sort of liking towards her, which had Baek Dae Gil let her go towards Prince Yeoning’s direction.

Baek Dae Gil is paired up with someone in the end, though. He gets Gye Seol Im, a slave who he meets after he himself is sold and made a slave following the fall off the cliff. Though Baek Dae Gil ends up with Gye Seol Im, we don’t get to see any kind of development between them. She stays by his side throughout his time of slavery in a fellow-slave kind of way before they part ways after Baek Dae Gil successfully frees her and everyone from slavery. She appears again midway through the drama to feature in a plot where she joins a man called Dog Blade to carry out her revenge for her father’s death. After this, she goes back to Baek Dae Gil’s side to serve as a supportive character in Baek Dae Gil’s quest to stop Yi In Jwa right till the very last episode. The only mention that a romantic relationship had developed between the two is at the second last scene where her marriage to him is mentioned! Baek Dae Gil isn’t even in the scene with Gye Seol Im when this is mentioned. So, no told romance arc for the male lead.

What the drama chose to develop and focus on is the relationship between Baek Dae Gil and Prince Yeoning. We loved the developments between the two. From strangers who bump on the street, they become friends then later allies. It’s interesting seeing the two get along so well, firstly because they are from different worlds—Prince Yeoning is royal, Baek Dae Gil is supposedly just a commoner—and secondly, Baek Dae Gil is actually royal and older, so Prince Yeoning should see him as a threat to his desire for the throne, which he later does. We love that Baek Dae Gil chooses to serve and protect Prince Yeoning instead, keeping the promise he made to King Suk Jong before he passed away (of course Baek Dae Gil does, he’s not part of actual history!). So, the two brothers’ relationship end off as King and Subject. We love the last scene where Prince Yeoning (who’s since taken the throne to become King Yeongjo) visits Baek Dae Gil like a friend/brother does, checking up on him to see his friend/brother is doing well. This pairing is definitely the main pairing and a very good pairing for the drama.