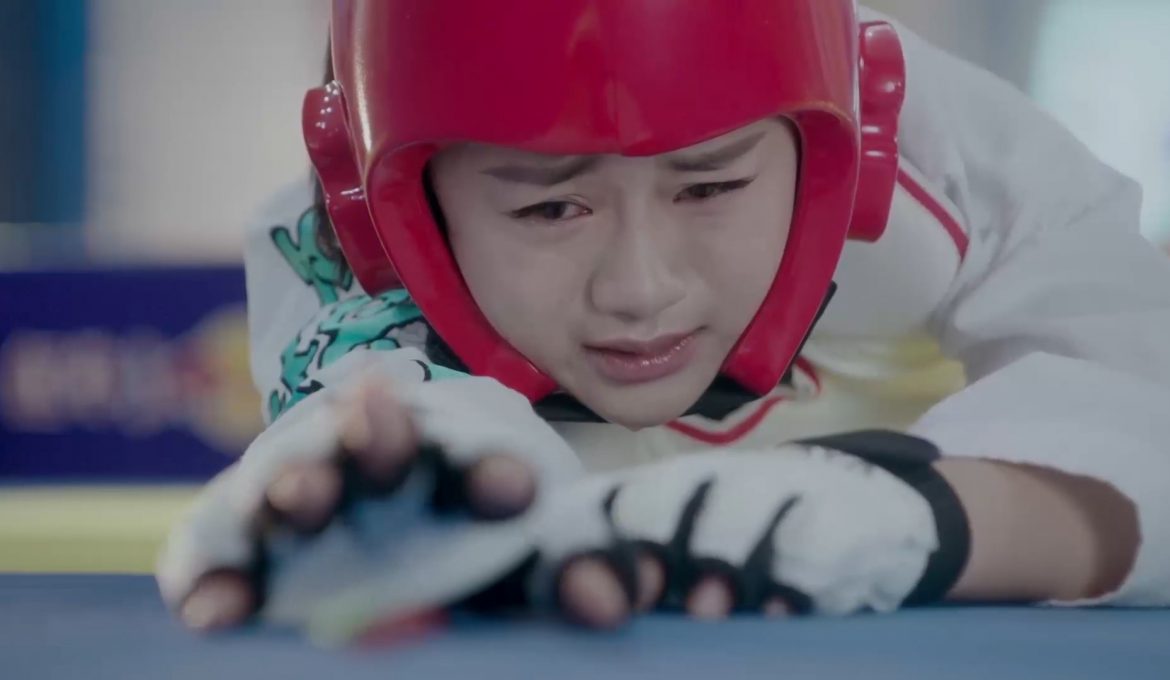 Qi Bai Cao is looking to be closer to letting Ruo Bai go. She gets defeated even with Ruo Bai’s hairpin by her side. The match Qi Bai Cao loses is against an opponent called, Kim Min Joo. Kim Min Joo is an opponent Qi Bai Cao had previously managed to defeat many times in previous matches. Kim Min Joo also feels like a friend of sorts to Qi Bai Cao judging by the way she had cheered on and gave encouraging support to Qi Bai Cao during the match where Chang An was out looking for a duplicate hairpin. In this match, Qi Bai Cao wasn’t able to defeat Kim Min Joo because firstly, Qi Bai Cao’s head wasn’t in the right space. Her fighting strategy for this competition was all about speed. She wanted to get to the City Youth Competition as fast as she could and this had her continuously use her trusty Whirlwind Triple Kick to knock out each of the opponents she faced. Second, Kim Min Joo figured out how to counter Qi Bai Cao’s Whirlwind Triple Kick, so it didn’t work on her. And third, Qi Bai Cao didn’t have Chang An’s help when she needed it after Kim Min Joo figured out how to counter Qi Bai Cao’s Whirlwind Triple Kick. Chang An told Qi Bai Cao before going into the competition that he wanted her to understand that Ruo Bai is dead. So, to do that, he left her to go into the competition without his support. But boiling it down, though, it seems the reason Qi Bai Cao was defeated was because of her emotions. Fang Ting Hao’s assistant had said that Qi Bai Cao had the skill to lead her to a win. She just needed to calm down.

So, Qi Bai Cao is left not moving from her position, facing the stage floor, reaching for Ruo Bai’s hairpin that got knocked out of her hair and onto the floor from a kick that was part of an 18-continuous kick move of Kim Min Joo’s. Chang An—he stands on the sidelines watching this rather pitiful sight with pain and sadness. He runs onto the stage and helps Qi Bai Cao pick up the hairpin before lifting her up into his arms and carries her off the stage.

Qi Bai Cao is in an emotionless state afterwards. She wanders around the street by herself until Chang An finds her and brings her back to their hotel room where she again sits emotionless and motionless. The food Chang An gives her to eat is untouched. Though Qi Bai Cao is emotionless and motionless, she isn’t so far gone into this depressed state of hers to ignore Chang An’s commands. She eats when Chang An commands her to. The food gets eaten in a pitiful way, though. The pitiful sight has Chang An drag her out of the room and out to a place outdoors where he gets her to face reality. Chang An asks Qi Bai Cao to call out to Ruo Bai and get him to appear before her. Chang An’s reason for getting Qi Bai Cao to do this is that the heartbreaking state that she is displaying before him should logically bring Ruo Bai to appear before him. But Qi Bai Cao doesn’t want to. Neither does she want to hear Chang An say Ruo Bai is dead. She shuts her ears, turns and moves away from Chang An.

The episode ends here. It’s looking like we’re getting close to seeing Qi Bai Cao moving on from Ruo Bai being her motivator to do well in competitions—for sure Ruo Bai’s hairpin is no longer like a good luck charm for Qi Bai Cao to win matches when she loses when she had it on.

The scene that showed Chang An carrying Qi Bai Cao off the stage after her defeat was a very memorable moment of the episode. Chang An’s devastated and pained expression as he watched Qi Bai Cao on the ground so pitifully prior to it, him dashing onto the stage to help Qi Bai Cao retrieve the hairpin and picking her up and then carrying her off the stage was a sequence of scenes that was really, really sweet!