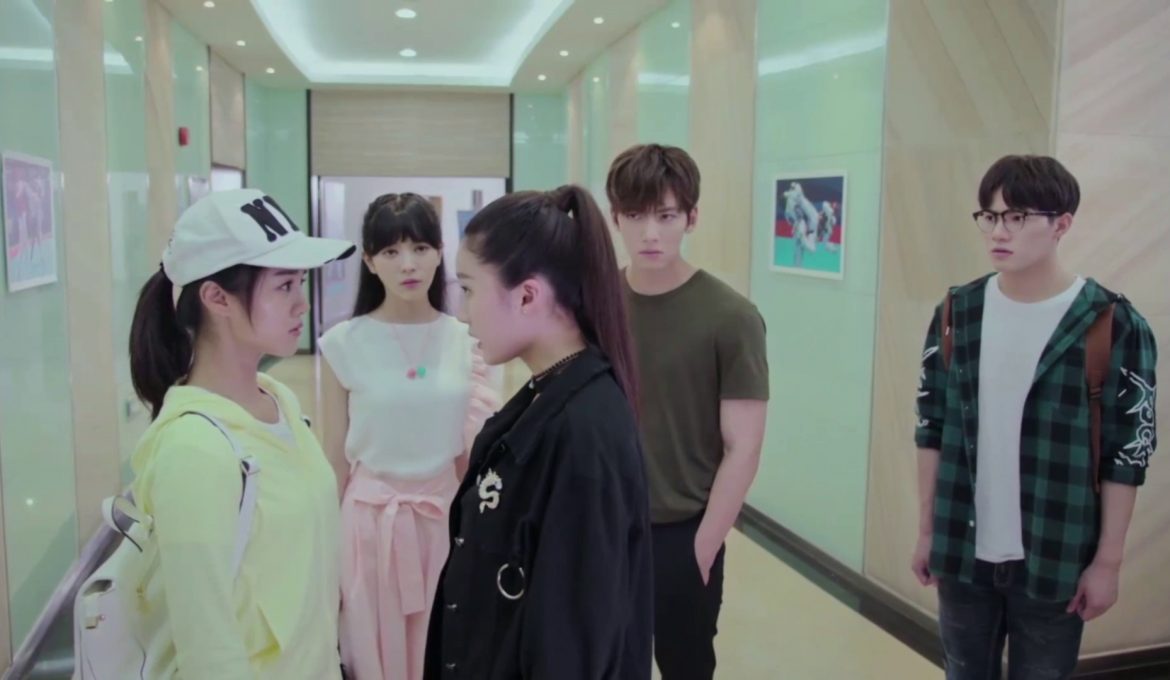 Song Bai participates in this qualifying round of the competition, the Anyang Yuan Wu Dao Qualifiers. Chang An has entered them in to participate. There’s a need to participate when they’ve just started up and don’t want to shut down again. To earn money for the application fee, Qi Bai Cao will do more in this area whilst the others concentrate on training. She will also do the housecleaning so that they can train without worrying about such things.

The Song Bai gang is a bit rusty after some time away from practicing Yuan Wu Dao. They struggle to do the basics and hurt themselves when they attempt to train without structure. Fan Xiao Ying scream in pain when she struggles to break a board and then attempts to break a garden pottery with a kick. This is the training method that Qi Bai Cao succeeded in doing when she was practicing Yuan Wu Dao. Meanwhile, Yang Rui hurts Wu Xiu Da when he goes to show Fan Xiao Ying he can break a board, but lands his foot at the side of Wu Xiu Da’s neck. He becomes woozy from going on the spinning wheel that Qi Bai Cao mastered. Chang An isn’t impressed with the bad shape they are all in and the way they are training. He instructs them to practice the basics and do things in a structured way. With this, on with training the Song Bai gang goes.

Feng Yun Hall is participating in the Anyang Yuan Wu Dao Qualifiers even though they have gathered enough points in previous competitions to continue on in the overall competition. In a press conference at Feng Yun Hall’s Anyang base, Yin Xiu explains their participation in the Anyang Qualifiers to be because Anyang is where Yuan Wu Dao originated and so Feng Yun places importance in promoting and developing Yuan Wu Dao in Anyang. She, herself, also thinks highly of the place. There’s another reason she has to participate: it’s her desire to be the strongest one. Participating in the the Anyang competition is to show there is no other who is named the strongest one.

On Song Bai Hall’s first day of competitions, Yin Xiu is rather unimpressed with the poor performance of Song Bai who loses their best of three competition against Long Wu Hall. Fan Xiao Ying won her match, but Wu Xiu Da and Yang Rui lost their matches. Yin Xiu surprises everyone with her appearance after their match when she calls Song Bai Hall’s top fighter, Qi Bai Cao, to stop being pathetic and come out and have a fight with her.

“Yuan Wu Dao needs those who are strong not cowards. It doesn’t need pathetic people who are afraid to get onto the stage even more where they only hide under a cap and watch in secret. Therefore, since you have returned to the arena, come up and openly challenge me. Challenge yourself, Qi Bai Cao.”

Neither the audience nor the announcers who had spoken of Qi Bai Cao’s absence in this competition at the opening of the competitions had realised Song Bai Hall’s flag bearer was Qi Bai Cao and had been concealed under a cap and had been at the sidelines watching and cheering her hall mates on. The audience expresses surprise hearing Yin Xiu indicate Qi Bai Cao was apparently amongst them and back.

“Why did you join Feng Yun Hall? Didn’t you say that the place only trains people who become monsters?”

“I’m originally from Feng Yun Hall. Weren’t you my instructor? As for monsters, you and Feng Yun Hall trained her and Ting Yi into monsters. So what if there’s the addition of me?”

“Ting Hao-qianbei, this isn’t who you are. The Fang Ting Hao we know isn’t the one we see now.”

“Then you can get to know me all over again.”

It looks like Fang Ting Hao has a change of attitude towards Qi Bai Cao. We see him being cold. He’s not as nice to her after what happened to Fang Ting Yi.

For a bit there, we thought Fang Ting Hao really has stopped liking Qi Bai Cao because of what happened to Fang Ting Yi. That was until we came to that scene where Yin Xiu said Fang Ting Hao was deliberately being mean to Qi Bai Cao because he still cares. Looks to be that way too when he wasn’t able to ignore Qi Bai Cao standing out in the pouring rain. He wanted to show harshness with getting the police to get her out of the rain by forcing her to leave, but ended up personally going down himself with an umbrella. Glad Fang Ting Hao is still a nice guy underneath that harshness he wants everyone to see.

In this episode, it’s mainly seeing Chang An looking awkward or embarrassed. Qi Bai Cao offers gestures to Chang An that makes him like that. They’re not gestures that are only towards him, though. These gestures from Qi Bai Cao are extended to the others, too. So, Chang An isn’t getting special attention from Qi Bai Cao. It’s made to come across as a significant moment for the two, though, when Chang An reacts to it or Fan Xiao Ying and Qu Guang Ya giggles when they see the curious moment in front of them between the two.

Qi Bai Cao goes around handing everyone an energy drink. When Qi Bai Cao hands Chang An one, he has a surprised look. Qi Bai Cao smiles and waits for Chang An to take it. After Chang An does, Qi Bai Cao has a sort of a shy look. She then quickly scurries away and sits with the others. Meanwhile, Chang An puts the energy drink aside and seems to think on the moment that just took place between him and Qi Bai Cao. He’s happy.

Whilst the others train, it seems Chang An and Qi Bai Cao goes to do the grocery shopping together. We see it on two occasions. Chang An rides a bicycle and Qi Bai Cao sits at the back. The first one has them just coming back to the hall. Qi Bai Cao thanks Chang An (after their trip to the market, we assume) and Chang An acknowledges her thanks with a nod and smile. The second one is a bit more generous. We see Chang An wait for Qi Bai Cao to go grocery shopping. He ushers Qi Bai Cao to quickly go with him on the bicycle because he still has training to do afterwards. On the road, Chang An tells Qi Bai Cao to not do everything herself like taking on studying, housework and earning money. Let him take some of that responsibility. He then warns her to hold on tight because they’re about to go onto a bridge. And Qi Bai Cao does so immediately. She grabs hold of Chang An’s shirt at his back and Chang An continues on with a smile while Qi Bai Cao is slightly shy at the back after holding on.

Chang An helps Qi Bai Cao dry off after bringing her back from waiting for Fang Ting Hao outside his company building in the rain. Chang An dries Qi Bai Cao’s hair. He wipes her arms dry. Qi Bai Cao doesn’t suggest to dry herself off herself during this time. She’s still in thought until Chang An gets a bit close with going to pat her neck area dry. Chang An doesn’t stop helping Qi Bai Cao dry off when Qi Bai Cao finally finds him drying her off uncomfortable and went to say she can dry herself off. What does Qi Bai Cao do when Chang An ignores her suggestion of drying herself off? She just lets Chang An continue helping her dry off. :oD :oD. Chang An dries her hair again. He wipes her arm again, too. He dries without the towel and Qi Bai Cao just sits there holding and looking at the towel that Chang An is no longer using to dry her off with.

During training, Qi Bai Cao giggles at the sight of Wu Xiu Da expressing a bit of pain after Chang An seems to find Wu Xiu Da wasn’t doing his stretching exercises well enough and made him stretch more than he was comfortable with doing. After this, Qi Bai Cao runs to Chang An. She seems to notice the need Chang An has for a towel to wipe away the sweat from working hard. Just like the scene where Qi Bai Cao extended an energy drink to him, this is another scene that makes Chang An a bit surprised. It takes him some moments before he accepts it. He accepts it a little bit awkwardly. In the background, Qu Guang Ya and Fan Xiao Ying notices the scene going on between the two. Fan Xiao Ying’s giggles make Qi Bai Cao leave and head over to the two to playfully put Fan Xiao Ying into a headlock for embarrassing her. Meanwhile, it’s smiling to himself for Chang An.