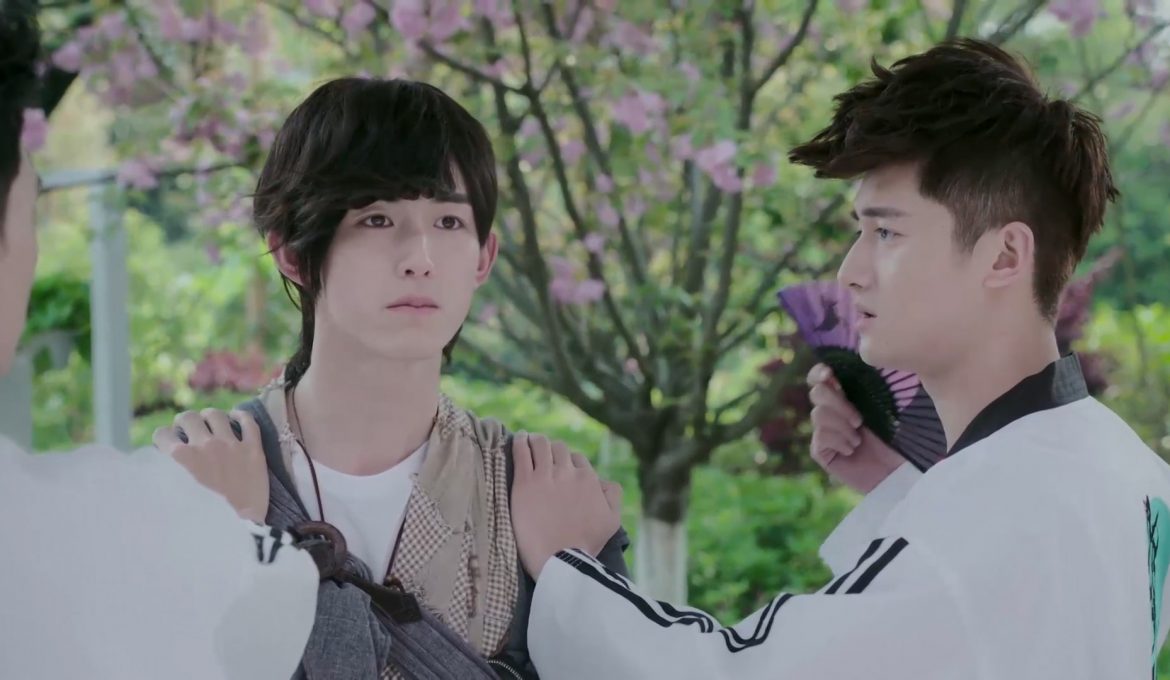 Lu Fei Yu gets forced to show his martial arts abilities when Chang An suddenly initiates a fight. At first, it confuses Lu Fei Yu and he dodges Chang An’s attacks for some time. It’s not until he gets knocked down onto the floor that he finally shows his fighting abilities. Lu Fei Yu does his characteristic kip up move before directing Chang An some of his own attacks. Lu Fei Yu’s skills in martial arts pale in comparison to Chang An’s martial arts skills, though. Lu Fei Yu is like a rag doll to Chang An. He gets hoisted up into the air by Chang An then brought harshly down onto the floor.

Chang An suddenly attacking Lu Fei Yu and forcing him to fight is to reveal to everyone that Lu Fei Yu is the likely suspect to have done something as to cause Qi Bai Cao unable to participate in the competition in London. It was in response to Fan Xiao Ying informing everyone that Song Bai’s application to enter Qi Bai Cao in the competition in London was not received.

This competition in London is one that is very necessary after Qi Bai Cao failed to win the championship in the competition in Japan. It is part of a tiring schedule that Qi Bai Cao must place to earn enough points to qualify for the City Youth Competition.

Though Lu Fei Yu has been sneaking around other halls, leaking information and causing trouble for Song Bai, we think the application isn’t his doing. Believing Lu Fei Yu’s plea for the Song Bai students to believe him, it means there can only be one other person who could have done something to the application. Fang Ting Hao. He’s got the ability to do something with his high position and he has been against Qi Bai Cao participating many times. He’s also got the qualities to do something like this. We find Fang Ting Hao to be rather pushy and likes to have things his way. So, he’s definitely the one we’re suspecting.

Whether Lu Fei Yu is the one to have done something or not to the application, Lu Fei Yu’s time is up in Song Bai. Lu Fei Yu gets kicked out of Song Bai and out of Fan Xiao Ying’s heart.

It’s the end for scenes with Chang An and Lu Fei Yu now Lu Fei Yu is kicked out of Song Bai as well. It was a very, very minor part of the show; but, we enjoyed the sort of best friend/buddy relationship between the two when it did come onto the screen. Lu Fei Yu always manages to bring Chang An’s rigidness down a whole lot like in this episode where Chang An tries to get away from a clingy Lu Fei Yu looking for someone to help him with his relationship problem with Fan Xiao Ying.

Chang An has really taken a liking towards Qi Bai Cao. He’s surprised and then happy when Qi Bai Cao tells him the strawberry snack that she brought to him is a gift from her. But then, he’s disappointed when Qi Bai Cao adds that the strawberry snack that he thought was a special gift only for him is in fact a common gift that Qi Bao Cao has given to her Song Bai friends. Poor Chang An then has to swallow his disappointment and act like her answer didn’t disappoint him. Qi Bai Cao is so clueless! At this point, her cluelessness is tolerable since she just got over Ruo Bai. But if she continues like this… We’re sure she won’t continue like this. :o) :o). Chang An is too lovable for her to not start to really like him! :oP :oP.