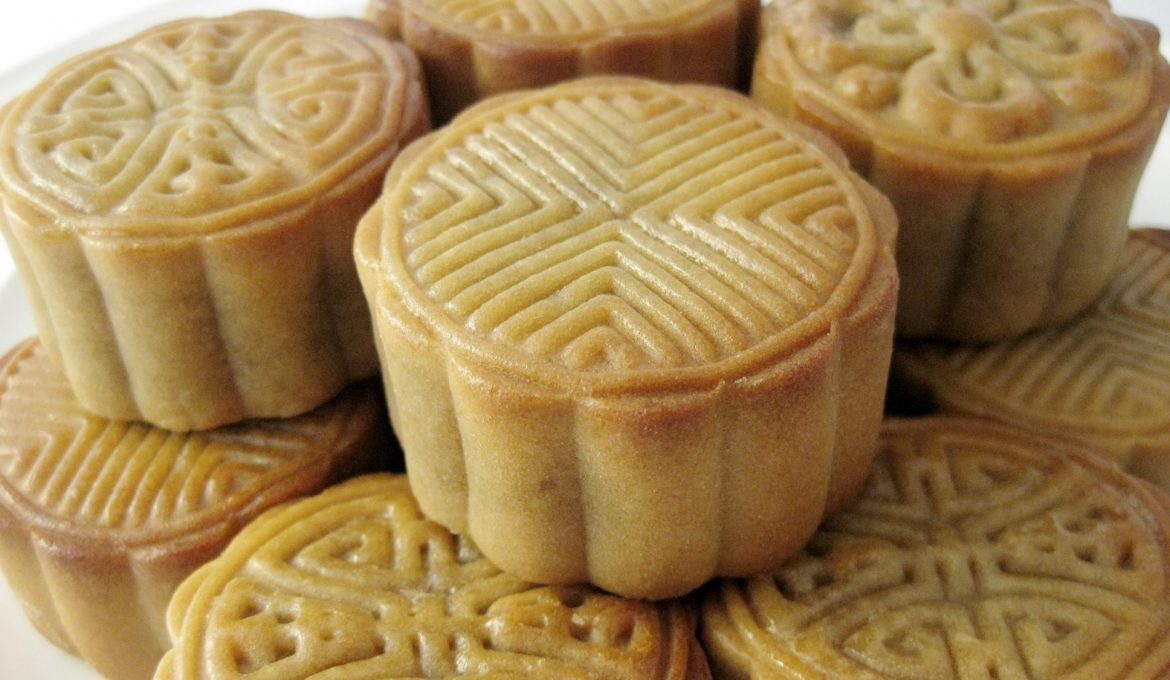 There was a time we thought mooncakes weren’t so easy to make. The few times we tried, they always came out looking wrong. The colour was pale. It didn’t have that nice golden brown skin with just that tiny bit of sheen on it. The pattern always lost its definition and the shape expanded outwards. The most disappointing is they never had that soft, thin, tender crust. The crust always came out hard.

When you fail, just keep trying—or in our case, keep searching until we found the reason why every time our mooncakes came out that way. It was a pretty simple reason: we didn’t let the mooncake mature. Mooncakes require time to soften up and develop the golden brown color which is helped by absorbing the oils in the filling and the kansui (also known as lye water, or potassium carbonate and sodium bicarbonate).

Mid-Autumn Festival is the time we normally enjoy mooncakes. Every year it’s observed on the August 15th on the lunar calendar—that would be October 4th for this year—so it’s still a little while away. But, we thought, why not post a blog about homemade mooncakes a little early. That would give plenty of time for anyone who thought about making mooncakes, but have yet to try, plenty of time to hone the skills ready to impress family and friends by the time Mid-Autumn Festival rolls around!

It really isn’t actually that hard to make the traditional red bean mooncake after all. It just takes a bit time. The recipe we chose to adapt a recipe from blogger, happyhomebaking.

The original recipe makes about 11 50g mooncakes. They’re pretty small, and with just 11, they get eaten pretty quickly, so we decided to double the recipe in order to have enough to eat as well as give away.

Kansui is food grade lye water (potassium carbonate and sodium bicarbonate solution). The use of kansui we believe gives the skin that chewy tender texture as well as the brown colour.

Where to find Kansui and Red Bean Paste

We used a mechanical mooncake mould. It’s much easier and quieter than the traditional wooden ones.

Preheat the oven to 160°C.
Our oven is a fan-forced convection oven. For a conventional oven bake 20°C higher.

TIP: To make the disk of mooncake skin, place the dough between two layers of cling film and flatten with something flat, e.g. a dough divider. Using cling film will avoid dough sticking to the surface the dough is being flattened/rolled.

Bake and egg-wash the mooncakes

NOTE: The amount of egg needed to glaze the mooncake is very little, so if you happen to be frying an egg or making an omelette as well as thinking of making mooncakes, save about 1 – 2 tablespoon for the mooncakes. Of course, you could also just crack a whole egg and then use the rest to fry an egg or make an omelette. : oP :
oP.

TIP: Don’t put too much as it’ll the egg will just pool on the top of the mooncake and it won’t look too nice. We like to dip a fork into the beaten egg then swipe the brush across it so that we don’t pick up too much. We add about two or three thin layers.

Remove from oven, allow to cool before storing in an airtight container.

Leave mooncakes in container for 1-2 days to allow oils to be absorbed into the skin.
The mooncakes can be eaten on the same day, but the skin/crust will be hard. To get that soft tender mooncake skin, mooncakes need to mature for a short time. The oilier the filling used the less time the mooncakes needs to mature.