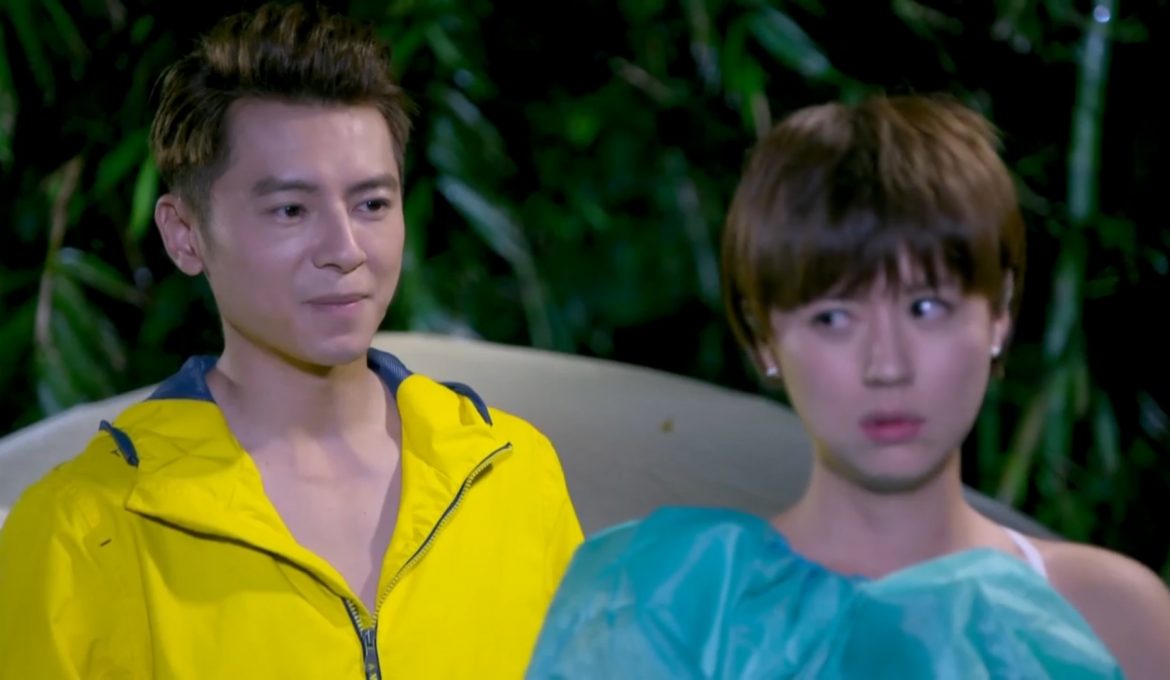 The event celebrating this year’s anniversary of the founding of Si Ping High School is decided as a BBQ camp trip when Fang Xiao Rou’s dart lands on the activity. Fang Xiao Rou and Han Jie go on a two day trip to survey the campsite.

Han Jie takes the directions supplied by Fang Xiao Rou. However, her directions are out of date and it lands the pair in an unfamiliar location. Things get worse when Fang Xiao Rou suggests for them to do a U-turn they puncture a tyre and there isn’t reception for them to use GPS on their phones. This sees Fang Xiao Rou and Han Jie go on foot and rely on their own navigation skills.

Their wandering takes them to a place with no reception and they shelter from the rain under a hut in the vicinity. Fang Xiao Rou’s response to their being lost is to find a location with reception and make contact with Jiang Pei Ying to ask for help. However, Han Jie prefers to continue to remain without help, reasoning solving this problem themselves will guarantee them in leading their students safely at the camp trip by experiencing and solving this.

Han Jie and Fang Xiao Rou move around forest trails and rocky areas before finally coming to a location of flowing river and riverside rocks—the location that Han Jie finds perfect for their BBQ campsite. As Han Jie takes pictures of the possible campsite, the sight of Han Jie crouched at the edge of riverside rocks has Fang Xiao Rou see an opportunity to play a trick on Han Jie as she sneaks up to go push him into the shallow river waters. However, Fang Xiao Rou’s own trick gets her into the river water and has Han Jie be the one enjoying the sight and takes pictures of her misfortune from being so michievous. The fun and amusement quickly change when Fang Xiao Rou gets into trouble in the water as she begin to head down the river. Han Jie quickly heads in to save her.

Both Han Jie and Fang Xiao Rou are safe. Night falls and the events in the river has Fang Xiao Rou and Han Jie set camp for the night. Whilst Han Jie comfortably tends to the campfire, Fang Xiao Rou sits shivering and wearing every layer of clothing she had on when she went into the water. She hugs her clothes more when Han Jie directs a look towards her after she sneezes from the cold.

Fang Xiao Rou’s worry over Han Jie’s attention on her body gets her into some uncomfortable situations that begins with trying to hide herself from Han Jie. After much convincing from Han Jie for Fang Xiao Rou to change out of her wet clothes to avoid the possible chance of getting sick from staying in the wet clothes and needing to visit a hospital that is much too far away and require him to carry her on his back all the way back that he wishes not to have to do, Fang Xiao Rou heads into her tent and gets changed. After getting out of her wet clothes and handing them to Han Jie to dry on the crude clothes line in the eating area of their campsite, Fang Xiao Rou remains in this safe area away from Han Jie’s eyes. But, it becomes an unsafe place when a snake enters the tent. After Fang Xiao Rou makes sure Han Jie has his eyes closed, she goes on Han Jie’s instructions to exit the tent. Fang Xiao Rou’s speed and direct path towards and into Han Jie bowls him over and ends with her landing on top of him. She covers Han Jie’s eyes from seeing her with only a sleeping bag barely shielding her in her undergarments. As if this wasn’t already uncomfortable enough for Fang Xiao Rou, she lands herself into one more uncomfortable situation: when Fang Xiao Rou asks Han Jie to help her back up, again with his eyes shut, the help she asks from Han Jie brings her to accidentally kiss Han Jie on the lips.

One final flustered moment for Fang Xiao Rou comes from this: after Han Jie gets bitten by the snake he released back out into the wild, Fang Xiao Rou acts on impulse and sucks the venom out from Han Jie’s finger—only that the snake isn’t poisonous. Han Jie becomes moved by the action and stops himself from trying to tell Fang Xiao Rou of this fact. Fang Xiao Rou ends up embarrassed and she demands Han Jie to cook her instant noodles for letting her continue sucking the snake venom out of his finger.

The following scene sees a talk by the campfire, bringing Fang Xiao Rou to reveal to Han Jie of her wish to lead Si Ping High School to a win in the cooking competition. Meanwhile, Han Jie reveals to Fang Xiao Rou of having become like her in the past year she was abroad, chasing students skipping class and having come to have glass ankles. But none of this is heard by Fang Xiao Rou when she falls asleep partway. Han Jie brings the sleeping Fang Xiao Rou to her tent and gives her a kiss goodnight on her forehead.

The site inspection ends on a fun note the next day when Han Jie becomes tired of Fang Xiao Rou’s scared ways and he suggests each of them to be the other: Fang Xiao Rou as the brave and commanding one while Han Jie the scared and obeying one for the remainder of the trip.

Chen Meng Chen is a familiar face: she was Shi Wen High School’s team captain that defeated Si Ping High School at last year’s Universiade competition. This tough and competitive former student of Shi Wen High School’s reason for transferring to Si Ping High School is her admiration of Han Jie’s skill and wishing to learn from Han Jie. Some positive words are spoken about Chen Meng Chen from some of the students, describing Chen Meng Chen as being intelligent and beautiful enough to challenge Liu Xuan on her goddess status in the school; but, the general consensus is dislike and unfriendliness amongst them. Chen Meng Chen isn’t concerned about the student’s dislike and unfriendliness, however. She only cares about learning Han Jie. This is demonstrated right after Han Jie directs her and Wei Qi Zhen to join the girl’s group, but she decides upon herself to take her position next to Han Jie and offers her help to him. It was further demonstrated during a classroom scene showing her packing her gear up and getting up to leave when she heard that Han Jie was going to be absent from teaching the class and the replacement teacher was Wen Zhen Yu.

Wei Qi Zhen, on the other hand, is welcomed by the students. The nerdy and agreeable girl who collided into Wang Mai Zhi earlier in the morning is introduced as the daughter of the owner of a popular bakery that Han Jie loved as a child. Han Jie’s recommendation of her family’s bakery has the students place a large order for some of her bakery’s buns which has everyone praising them and has Wei Qi Zhen accepted by the group of students immediately.

Wei Qi Zhen’s introduction into the story looks to be used to ruffle Liu Xuan. Liu Xuan has been able to grab the attention of not only Wang Mai Zhi, but also Ma Chong Sheng without much effort on her part because both guys always go to her automatically. But now with Wei Qi Zhen entering and with Ma Chong Sheng being the nice person that he is, it seems Liu Xuan is noticing and showing signs of being worried that Wei Qi Zhen is taking Ma Chong Sheng’s attention away from her.

With Fang Xiao Rou and Han Jie, the scene at the campfire after Fang Xiao Rou gets rescued by Han Jie from going into the river, we were worried that it was going to bring in some fluffy moments that would make us cringe. When Fang Xiao Rou topples Han Jie over and has them in a comprising position from Fang Xiao Rou running out of her tent to get away from the snake in her tent, we didn’t want to see time stop and have the two become mesmerised by each other’s gazes and touch. We find such fluffy scenes difficult to watch. Fluffy scenes are effective when there’s not a littering of them or put in for the sake of fluff. The moment has to be built and there has to be purpose and reason for the fluff to take place. We want fluff, but this scene wasn’t quite the right moment for the type of fluffy scene we hoped not to see. So, we were very happy when we saw Han Jie show priority towards the snake that was in Fang Xiao Rou’s tent and not see him become lost in the moment that he obviously wished he could continue to be in. This scene was done really well and to our liking!

The accidental kiss was pretty shocking, but cool. It’s quite a nice way to have Han Jie and Fang Xiao Rou kiss without a real one coming in!

The scene where Han Jie goes in to give Fang Xiao Rou a goodnight kiss on the forehead, it was quite effective to have the shot go from the inside of the tent to the outside of the tent and seeing a silhouette of the scene. It made that moment more special and private by having the viewer watch the end of this kiss from the outside rather than inside.

It was really interesting to see the Shi Wen High School team captain, Chen Meng Chen, switch to being a Si Ping High School student! We did not expect that! But it’s nice to see this character again. Though she was a meanie and is still a meanie, we actually like her character. We like her character when she was first introduced at the Universiade! We like that she has such a competitive nature. It will bring in some great conflict and interesting situations. We are very much looking forward to finding out what role she has in the story.