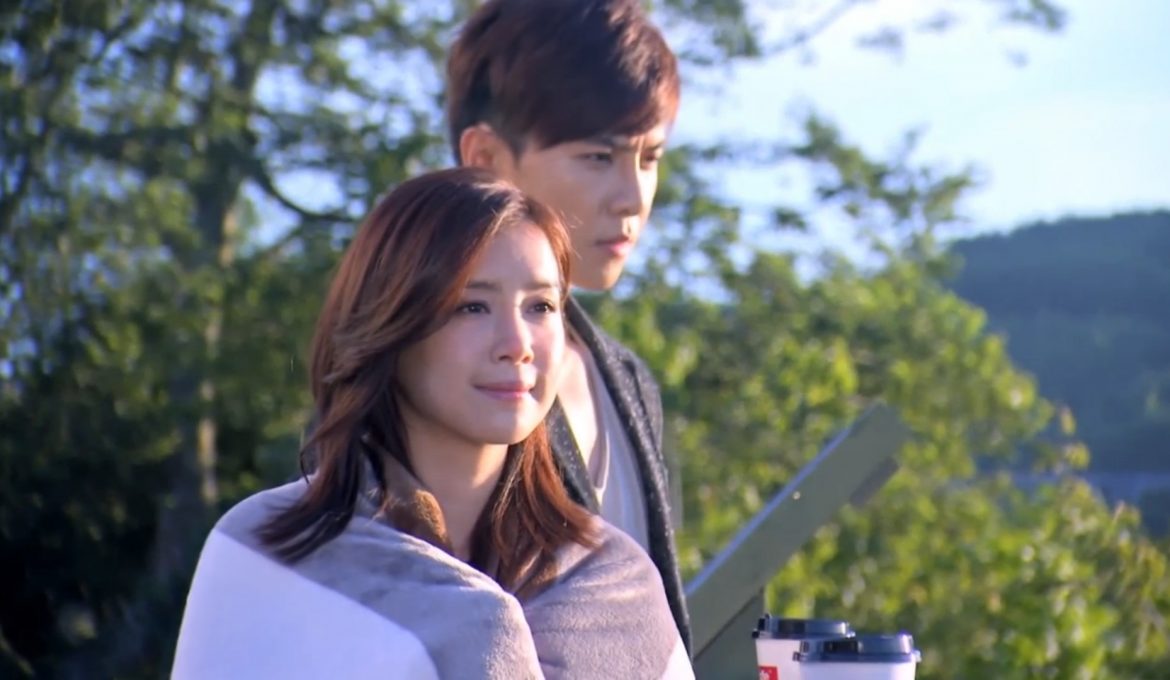 After last week’s baffling reasoning behind the break-up between Ji Jia Wei and Guan Xiao Tong, truthfully we were not looking forward to seeing what Episode 17 will bring. If we ignore what happened last week, though, we suppose Episode 17 turned out pretty well: only the first scene gets us riled up. The rest of the episode is actually pretty okay. It was nice even—that is if we ignore Guan Xiao Tong and just concentrate on Ji Jia Wei for the last two-thirds of the episode.

Last week’s episode ended with both Ji Jia Wei and Guan Xiao Tong going to the cinema separately, but ended up watching the same movie at the screening. Episode 17 continues off from it with Guan Xiao Tong leaving to outside the theatre’s entrance after the screening finishes. She’s crying, pained and worried at having seen Ji Jia Wei watching the movie alone, so she calls him on his phone to tell him to take care of himself when she’s not around after having himself pat himself on the head. (It’s the same action he made her do when he was on a business trip where He Zhi Yu happened to be as well.) The following day, Ji Jia Wei finds out that Guan Xiao Tong resigned from I Meet You Dating Agency.

This just does not sit well with us. We’re watching this scene wondering what the deal is with Guan Xiao Tong. She’s calling him and crying like she’s the one left behind by him, like she can’t get back together with him because he broke up with her. We get that she still cares for Ji Jia Wei and doesn’t want him to hurt, but it’s so hard to watch her act this way. Guan Xiao Tong who was once non-dramatic and simple has become quite dramatic. She’s complicating things so unnecessarily!

After both of them dealt with the break-up their own way—Guan Xiao Tong running around the block whilst Ji Jia Wei settles for watching her from a far with Polo one night—time skips to a month later and we see Guan Xiao Tong as a psychologist. We see He Zhi Yu and Ji Jia Wei together. They’ve not started seeing each other. They’re just friends. Ji Jia Wei is with her because He Zhi Yu is worried he’d get bored so she likes to drag him along to her sessions with the psychiatrist.

Here, Ji Jia Wei and Guan Xiao Tong meet again. They’re both on the escalator, Guan Xiao Ting in her white coat going up one side of the escalators and Ji Jia Wei going down the other side. The two catch each other’s gaze. (This scene feels like the one in Episode 15 where they kissed, just that now they’re on opposite sides. It’s quite symbolic of the different directions they’ve gone since that time.) Hurriedly, Ji Jia Wei moves to go back up to catch her on the other side, but he is distracted momentarily as He Zhi Yu calls out to him, wondering what was wrong. He tells her about having seen Guan Xiao Tong before carrying on to go after her, but the time he stopped to talk to He Zhi Yu gives Guan Xiao Tong enough time to disappear from his sights.

Ji Jia Wei runs up to the top of the escalator in an attempt to see which way she went. Not finding her, he gives up the chase: he wants to respect her decision and give her space. Ji Jia Wei doesn’t want to be like the way he was where he’d go and turn every stone looking for the person as he believes it was the reason behind his break-up with He Zhi Yu. Disappointed by his lack of will to clarify any misunderstandings that might have arisen from He Zhi Yu appearing beside him, He Zhi Yu goes off to looks for Guan Xiao Tong.

She finds Guan Xiao Tong at her office, where she requests they talk. They sit together over a coffee in the hospital’s cafeteria. They talk about He Zhi Yu‘s progress and recovery before the topic of Ji Jia Wei enters the conversation, revealing that Guan Xiao Tong did indeed misunderstand the situation between Ji Jia Wei and He Zhi Yu. She makes an assumption that because Ji Jia Wei has returned to her, she’s making a lot of progress.

Guan Xiao Tong probably wasn’t phishing for information about the status of Ji Jia Wei and He Zhi Yu, but it sure felt like it when she slipped in her assumption about Ji Jia Wei returning to her. We really like He Zhi Yu in this episode, in particular, in this scene with Guan Xiao Tong. When Guan Xiao Tong made the assumption, He Zhi Yu initially repeats the assumption aloud, "Returning back to my life?" as if to reject the assumption, but then thinking about it again, she decides on going along with it. She neither denies or confirms. Her response is actually very ambiguous, asking, "Do you think it’s good to get back together with my ex-boyfriend?" It can mean they are together, they’re not together or He Zhi Yu‘s thinking about getting back together with him. He Zhi Yu was pretty cool in this scene! :oD :oD.

Ji Jia Wei ends up clearing it up, though, after He Zhi Yu goes back to tell him what happened and that Guan Xiao Tong appears to still care about him.

The rest of the episode has Ji Jia Wei looking out for Guan Xiao Tong without her knowing. The scenes that take place are like a rehash of all the major Guan Xiao Tong and Ji Jia Wei scenes that led them to be together. It starts with him holding her phone when she struggles to multitask (this is similar to the time Ji Jia Wei held her hair and tied it up for her when it was getting in her face whilst trying to wash dishes at an I Meet You Dating Agency event) and goes up to the point where they’re standing on a deck waiting for the sunrise in the mountains (which is similar to the scene when they were together back in Taipei, standing on a deck with coffees on the rail—the one where he steals her coffee and drinks it and then drinks his as well).

This last scene gave a bit of insight into the most likely reason Guan Xiao Tong broke up with Ji Jia Wei. She was bailing out of the relationship. She didn’t have the courage to face things and believe it will turn out right because of her being the embodiment of Murphy’s Laws. Whilst waiting for the sunset, Guan Xiao Tong loses faith that she will see the sunrise because in her words, when she wants something, she doesn’t get it. Here, Ji Jia Wei accuses her of lacking courage and seeing thing through till the end and bear any consequences that may come. To stop her from continuously using Murphy’s Laws to explain her cowardice in facing life, Ji Jia Wei moves to make a bet with Guan Xiao Tong: he tells her that if they don’t see the sunrise, he will take back the ring (which he left her a year ago as she appears to be the rightful owner of his ring, one Guan Xiao Tong has been wanting to return to him); if they see the sunrise then Guan Xiao Tong can no longer use her belief that she lives a Murphy’s life to explain her cowardice in facing it.

So, episode 17 ends well enough. We still can’t get over Guan Xiao Tong‘s dramatic actions in the last episode and the start of this episode, but at least the atmosphere is heading back up. We do wonder what will come from the fact that Ji Jia Wei is an illegitimate son. It looks like that will be in the next episode. Hopefully, this situation is handled well.