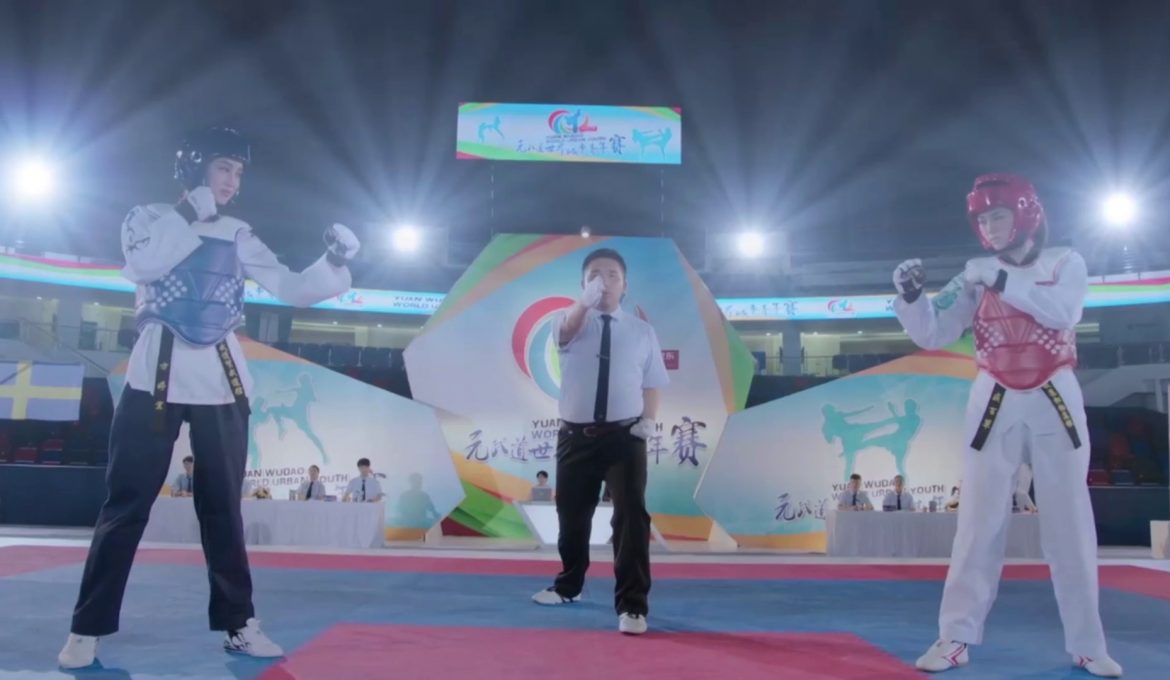 A day before the quarter finals match, Qi Bai Cao’s injured leg worries Chang An. The swelling in Qi Bai Cao’s knee during training has Chang An concerned about Qi Bai Cao possibly sustaining a permanent knee injury if she keeps participating in competitions with it. Qi Bai Cao, of course, tries to lessen Chang An’s concern so she can continue participating.

“Instructor, that quick fix you came up for me was effective. My opponent never discovered my knee injury. I kept using my left leg to attack and my right leg didn’t have any issues. It didn’t hurt one bit.”

“Your opponent tomorrow is Fang Ting Yi. Quick fixes used against an opponent like her is simply ineffective. If you keep continuing, your leg will definitely become a burden. Do you want me to sit and watch you take risks? Tomorrow, I will go to the committee and withdraw from the competition.”

Qi Bai Cao doesn’t agree with Chang An’s idea of withdrawing from tomorrow’s competition. She defends her want to continue participating with an argument of saying there will always be one thing or another that will make one think about giving up.

Qi Bai Cao adds the fact that giving up is also not the spirit of Yuan Wu Dao. She begs Chang An to allow her to compete for a dream she has been working very hard towards.

“I know there is a possibility I will be defeated by Ting Yi-qianbei. However, I won’t regret it in the future whenever I think about it.”

“My sister, Ting Yi, is now obsessed. Meanwhile, Bai Cao is going into the competition with an injured leg. There will, without a doubt, be an accident if those two go up against each other.”

“Seeing her want to participate in the competition so much, how can I be so ruthless as to disappoint her in her desperate request? Furthermore, what she says is reasonable. She is an athlete. If she, herself, has made the decision to compete, as her instructor, I cannot stop her. I will, however, use everything in my power to protect her.”

“Chang An! If you let Bai Cao compete, we’ll all regret it!”

On the sidelines, Chang An watches the fight with silent concern and worry. Fang Ting Hao at one point expresses aloud his worry with not forgiving Chang An if something happens to Qi Bai Cao. With Feng Yun Hall’s, Yin Xiu, she’s in the audience looking pleased to see Fang Ting Yi is annihilating Qi Bai Cao in this match so far. Through Fang Ting Yi, Yin Xiu is hoping to show her former drillmaster, Chang An, that she is the only one who can hold the title of ‘The Strongest One”.

“Don’t you want to win? Go into the fighting arena and use your Thunderbolt Firework Kick. Isn’t that cooler?”

“Of course I will use my Thunderbolt Firework Kick, but not now. There’s no fun in using it this early and ending the competition this early.”

“I don’t care about winning a competition. Not only do I want to win I also want her to return back to me everything that’s mine, bit by bit. I want to make her fall and never be able to get back up again.”

Fang Ting Yi doesn’t continue playing around with Qi Bai Cao after this attack. Satisfied with letting those who’ve come to watch their fight see exactly how strong-minded Qi Bai Cao is, and becoming bored with the way the fight has been going thus far, Fang Ting Yi goes to finish Qi Bai Cao off to end the match between them. She launches her Thunderbolt Firework Kick at Qi Bai Cao. She targets her right leg. It’s unforgiving. Qi Bai Cao feels excruciating pain in her right leg. The count to ten begins for Qi Bai Cao as she remains on the floor clutching her leg. Chang An tells her to retire from the fight. However, Qi Bai Cao has no desire to do this. She slowly rises, defies Chang An and expresses the ability to continue fighting.

“Qi Bai Cao, have you forgotten what you promised me before the competition?”

The promise Qi Bai Cao promised to keep is retire from the fight if there is the slightest possibility her injury could get more serious. Here and now, Qi Bai Cao turns away and breaks her promise to Chang An.

With all the concern coming from Chang An and Fang Ting Hao, we just thought, yeah, something bad is going to happen to Qi Bai Cao’s leg. There’s high probability Qi Bai Cao will end up like Chang An. But who knew something bad was going to happen to Fang Ting Yi! She looked so strong. Nothing really gave a clue an outcome like this would come for Fang Ting Yi. We guess when the focus is on a certain character being in danger, when other characters show concern and worry for this character, we should guess it’s the other character who no one shows concern or worry towards to be the one who ends up meeting danger!

It looks like Qi Bai Cao is going to be having a very hard time now. The curious thing is how Fang Ting Hao will treat Qi Bai Cao after this event. Will he now stop liking Qi Bai Cao and hate her after bringing his dear younger sister to be in a vegetative state?