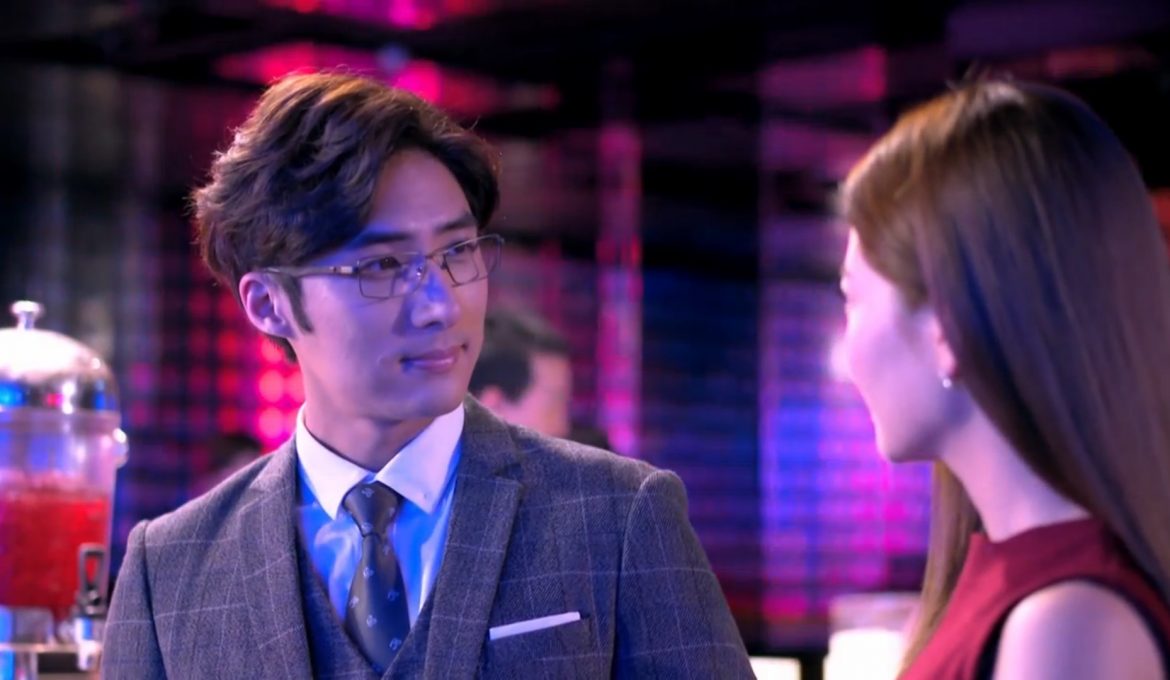 Zhong Yu Tang wakes up a few hours later. She finds a canister on the bedside with a note from Ji Wen Kai telling her to head to the doctor if she still felt unwell and to work if she felt fine. He also asks her to drink some ginger tea that’s in the canister—tea he made for her before he went to work.

Zhong Yu Tang recovers and is okay after a few hours of sleep. Ji Wen Kai, however, isn’t.

Throughout the day, Ji Wen Kai sneezes. When Zhong Yu Tang goes over to Ji Wen Kai’s place to make dinner for him, Ji Wen Kai complains of the food she made bland—even as she rectifies it by adding more salt. It is not until after dinner where Zhong Yu Tang is about to head home that Ji Wen Kai shows he has caught a severe cold. Zhong Yu Tang finds him in his bed, perspiring heavily and looking sick. She stays behind and takes care of Ji Wen Kai.

The evening after, Ji Wen Kai messages Zhong Yu Tang to make steak for him. This comes after an irritable start to the day when Zhong Yu Tang heads out in a rush after making him breakfast—forgetting to take the important puzzle that writes off her debt on the countertop—to go meet up with someone from Yours (Wang Zi Yu). He’s short-fused in meetings and finds Miao Ai Sha remaining beside him after her report irritating. His request for Zhong Yu Tang to come over to make him steak comes after Zhong Yu Tang gets informed by her colleagues that Ji Wen Kai had changed the deadline of Yours to two weeks—something that comes across to Zhong Yu Tang as Ji Wen Kai having simply decided on the whim, but was important information that was given to Ji Wen Kai at his meeting with Chairman Luo of Yours. Ji Wen Kai’s mood becomes better when Zhong Yu Tang hands over the ginger tea that she went out of her way to get for him. She gives it after she seeks Ji Wen Kai at the car parking lot, annoyed at him for shortening the deadline to complete the Yours project to two weeks instead of the three months he had initially given her.

Zhong Yu Tang’s gesture of buying him ginger tea has Ji Wen Kai show—what seems to be—his appreciation. It appears to be hidden behind his usual demanding ways: he messages Zhong Yu Tang whilst she’s out with Miao Ai Sha. He tells her to come over and make him steak in an hour. When Zhong Yu Tang acknowledges, he goes to a store selling items of various kinds to obtain squid slices (apparently, these are Zhong Yu Tang’s favourite foods to eat as we find out later). The squid slices takes him a lot of effort to obtain: he obtains it through many, many, many lucky draws.

Ji Wen Kai and Wang Zi Yu contact Chairman Luo to give Zhong Yu Tang the opportunity to discuss about the possibility for a collaboration between Yours and Mei Mei.

Wang Zi Yu does better than Ji Wen Kai. At Wang Zi Yu’s next meetup with Zhong Yu Tang at an eatery, Wang Zi Yu reveals the little effort it took him to have Chairman Luo agree to help, telling Zhong Yu Tang Chairman Luo immediately agreed to help when he went to see him about it. Ji Wen Kai, however, gets told by Chairman Luo that he no longer handles the affairs of the factories and stores of the company nor does he handle relationships between clients. He has people in the company seeing to such things. Chairman Luo does give Ji Wen Kai some inside information, however: they are reviewing the company’s budget in two weeks’ time. Chairman Luo advices Ji Wen Kai this is the amount of time they have if they wish to hand in a proposal.

Zhong Yu Tang enters into the secretary gathering. However, she gets no where with Head Secretary Zhang when he tells her that it’s a place to be happy and talking about work is spoiling the atmosphere. She gets an unwanted hand from him placed on her bare shoulder.

As this takes place, Ji Wen Kai enters into the gathering. He leaves Miao Ai Sha sitting at a restaurant waiting for him to show up to celebrate her birthday with her. He frantically searches for Zhong Yu Tang in the dimly lit room after coming across the knowledge of Head Secretary Zhang’s plan to humiliate Zhong Yu Tang earlier in the day when he overheared two gossipy secretaries talking about it.

Quite a random episode Episode 5 was. It felt like not a lot happened in this episode even with the many disconnected plots. It was Zhong Yu Tang struggling to get the meeting with Head Secretary Zhang, introduction of a love rival and Zhong Yu Tang continuing to pay her debt to Ji Wen Kai.

There were a few scenes for Miao Ai Sha. A lot of them were rather minor; but, they slowly show her like towards Ji Wen Kai.

There was the small scene where Miao Ai Sha talks to Zhong Yu Tang about how Ji Wen Kai is a good person and that a misunderstanding may exist between her and Ji Wen Kai. There were scenes focusing on Miao Ai Sha’s evening dinner with Ji Wen Kai to celebrate her birthday. We wonder if Ji Wen Kai will make it or completely forget. We’re thinking he won’t make it.

In this scene, we also hear Ji Wen Kai tell Zhong Yu Tang off for not separating work from personal matters. But we’re thinking how strange he said that when he failed to separate work from personal with those words about his bed being so comfortable that Zhong Yu Tang was only coming into work now. It comes after Ji Wen Kai being fine when Zhong Yu Tang thanked him for the ginger tea. He told her off when Zhong Yu Tang hands him his phone that he left at home. We can only think that Ji Wen Kai must have just realised Miao Ai Sha was there hearing all this talk about things happening outside of work with Zhong Yu Tang and he was trying to explain the situation to Miao Ai Sha—that everything Miso Ai Sha is hearing is just because Zhong Yu Tang is his housemaid. Otherwise, why tell Zhong Yu Tang for helping him bring his cell phone when his comment about his bed being so comfortable is mentioning a matter that is more of a private one?

We were indifferent to the swimming pool scene that showed Ji Wen Kai calming down Zhong Yu Tang. We think the scene wanted to show Ji Wen Kai as caring a whole lot about Zhong Yu Tang. The scene goes from normal time to slow motion with Ji Wen Kai’s voice telling Zhong Yu Tang he won’t let her go fading into the background to have a soundtrack coming in. But, it felt a little bit like an insert scene for the sake of more fluff scenes. It didn’t go well with us.

But we did like the scene where Ji Wen Kai grabs Zhong Yu Tang’s hand as he sleeps. Ji Wen Kai has a cute personality. That scene added to his cuteness!

We’re not sure about the jealousy that’s starting to show in Ji Wen Kai because of Wang Zi Yu. We’re not sure about how interesting it will get. We feel like there might be no room for Wang Zi Yu to come in to be an interesting threat to Ji Wen Kai. The entertainment factor might not be very good when Ji Wen Kai and Zhong Yu Tang are already looking hard to break apart with Ji Wen Kai always getting Zhong Yu Tang’s attention because he annoys her. Zhong Yu Tang’s competitive nature will mean her thoughts will be on Ji Wen Kai and how to win him a lot of the time. Not only that, Ji Wen Kai is actually not as mean as Zhong Yu Tang thinks he is. We can see that. Zhong Yu Tang simply needs to see this, too. We expect for her to realise this after some time butting heads with him has her see his care for her. At this moment, we don’t think there is a development that would make Wang Zi Yu’s love rival status interesting. But, it is still early. He just appeared. So, we’ll wait to see what comes from the character’s entrance into the story.

With the story, we’re not sure about what’s coming next. The progress of the main plot has been small. But what we hope to see in the later episodes is some focus on the members of Sales Team 3. So far, we’ve only seen Huang Jia Yin. The others haven’t really made an appearance. Even the supposedly second male lead character, Chen You Rui, hasn’t made much of an appearance. Now that Wang Zi Yu has appeared, we’re not sure what Chen You Rui’s role is. He’s not looking like a second male lead at all—not when it comes to the romance plot. Wang Zi Yu looks to be filling that role. All of the characters in Sales Team 3 are interesting and we wouldn’t mind seeing situations surrounding them.