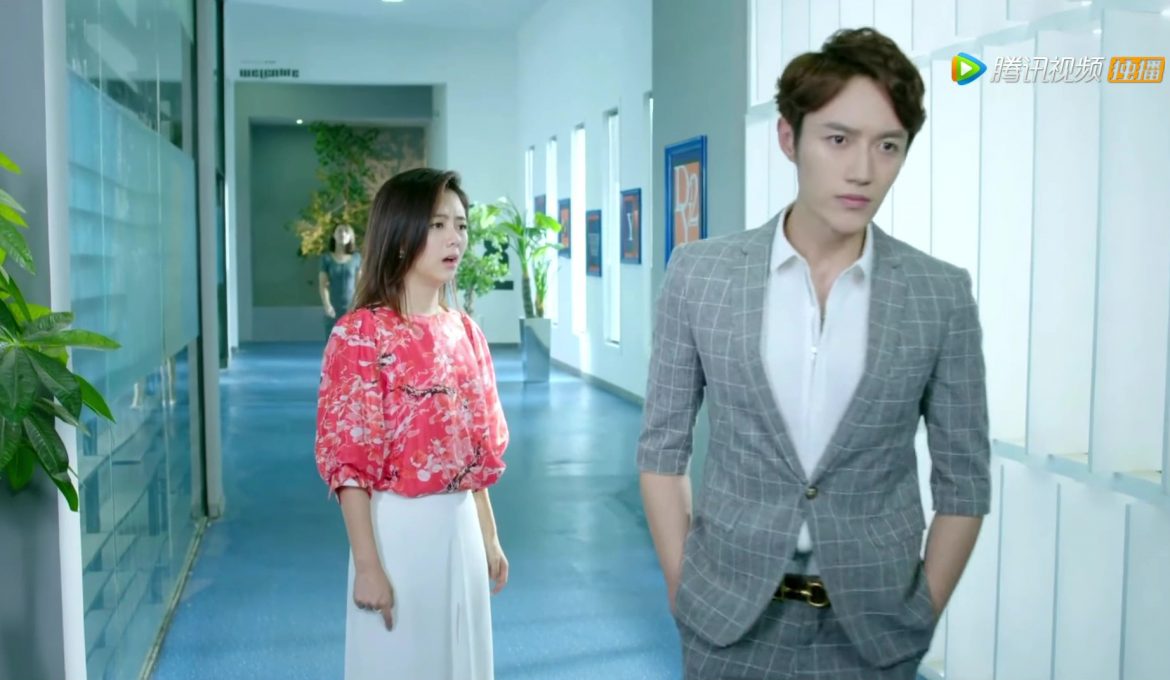 Gu Jin Yun comes back into the picture. He’s another person giving Li Yan Shu a hard time. The situation in this episode focuses on Zhu Dan’s lingerie product that Li Yan Shu finds problems with and Gu Jin Yun simply sees Li Yan Shu’s concerns to be nothing more than an attack coming from a plagiariser to a talented designer.

Gu Cheng Ze brings Gu Jin Yun into a meeting discussing about New Face. As Gu Jin Yun has shown before, he isn’t interested in the matters of the company. He’s bored in the meeting, shown with a folder placed over his face. Boredom is replaced by shock when Li Yan Shu enters into the meeting and she gets introduced to him by Gu Cheng Ze as the person he’d be working with as she is in charge of the product design department for New Face—of which he is the director of.

Gu Cheng Ze has been watching the pair from some distance. Secretary Gao also present, he asks Gu Cheng Ze if he should head over to manage the situation between them. However, Gu Cheng Ze provides no indication to Secretary Gao to head over. Li Yan Shu manages to free herself from Gu Jin Yun by herself in the end with a kick to his knee.

“She really is his nemesis.”

Li Yan Shu is indeed someone Gu Jin Yun isn’t able to overcome when it seems she compels him to do things he doesn’t normally do. Gu Cheng Ze’s decision to hire Li Yan Shu to get Gu Jin Yun to come to work at the company is fruitful when Gu Jin Yun shows up for work the next day on time and voluntarily.

Personal feelings rather than professional judgement is all over this decision Gu Jin Yun makes. He judges Li Yan Shu’s decision to halt the manufacturing of Zhu Dan’s product to be her inability to remove her personal feelings of dislike towards Zhu Dan and purposely making things difficult for a subordinate with more talent than herself.

Li Yan Shu attempts to have Gu Jin Yun see that what he sees isn’t the case. She is a professional doing her job. Her decision to pull it from the manufacturing line is due to seeing issues with a product that will bring about major problems if the product goes to the manufacturing line now without fixing the issues she sees. However, Gu Jin Yun only sees Li Yan Shu as undermining him and his decision. He tells Li Yan Shu to simply follow his orders and nothing else.

Zhu Dan gets back at Li Yan Shu for words she’d said in a private talk she had with her that had taken place after the talk Li Yan Shu had with Gu Jin Yun about changing his decision on letting Zhu Dan’s product go into production. What Li Yan Shu had said to Zhu Dan was that she’d buy popcorn and coke for a product with no issues. Zhu Dan remembers this and puts Li Yan Shu’s hand up for paying the bill for their group’s dinner. This group dinner celebrates the successful sale of Zhu Dan’s product. Reluctantly, Li Yan Shu hands over the cash to pay for their dinner when she couldn’t pass the bill onto Gu Cheng Ze.

Things to Take Away From Episode 6

“Li Yan Shu, didn’t you want to keep your promise to my grandma of not seeing me again? What are you doing coming to Sheng Hong?”

“Did someone give you a sum of money to do some shady business? It can’t be because you now know that all of Sheng Hong Group belongs to me and you changed your mind?”

“Your kind of behaviour brings down the average character of the male population. Miss, I advise you, forget about him.”

The behaviour Gu Cheng Ze’s neighbour refers to is Gu Cheng Ze ordering his girlfriend around with cleaning the surfaces of the door and doorframe to his place. Heh. If he only knew that Li Yan Shu’s quite good at deceiving people. She deceived him thoroughly!

We don’t see Gu Cheng Ze bringing the average character of the male population down at all even though he comes off rather harsh and demanding. Li Yan Shu seems to remember the ginger ale Gu Cheng Ze made for her and aware of the things he did to take care of her whilst she was sick the previous night. It made her say an interesting thing about Gu Cheng Ze’s character.

“He’s obsessed with cleanliness and loves to fuss about things. He can’t possibly not mention anything about taking care of me. Don’t tell me he’s the type who doesn’t reveal the good things he does?”

Gu Cheng Ze indeed didn’t make a fuss about taking care of her even with his obsession for cleanliness! Interesting character. :o) :o)

“Special Assistant Li, do you usually work like this? Because your subordinate is more talented than you, you deliberately make things difficult for them and reject their achievements.”

“Today we have our CEO here. Shouldn’t we consider giving him face? When is there a time that employees pay when having dinner with the boss? This just isn’t giving face to the boss. Right, Boss?”

“If you really want to pay the bill, I don’t mind.”

“Actually, that money is yours.”