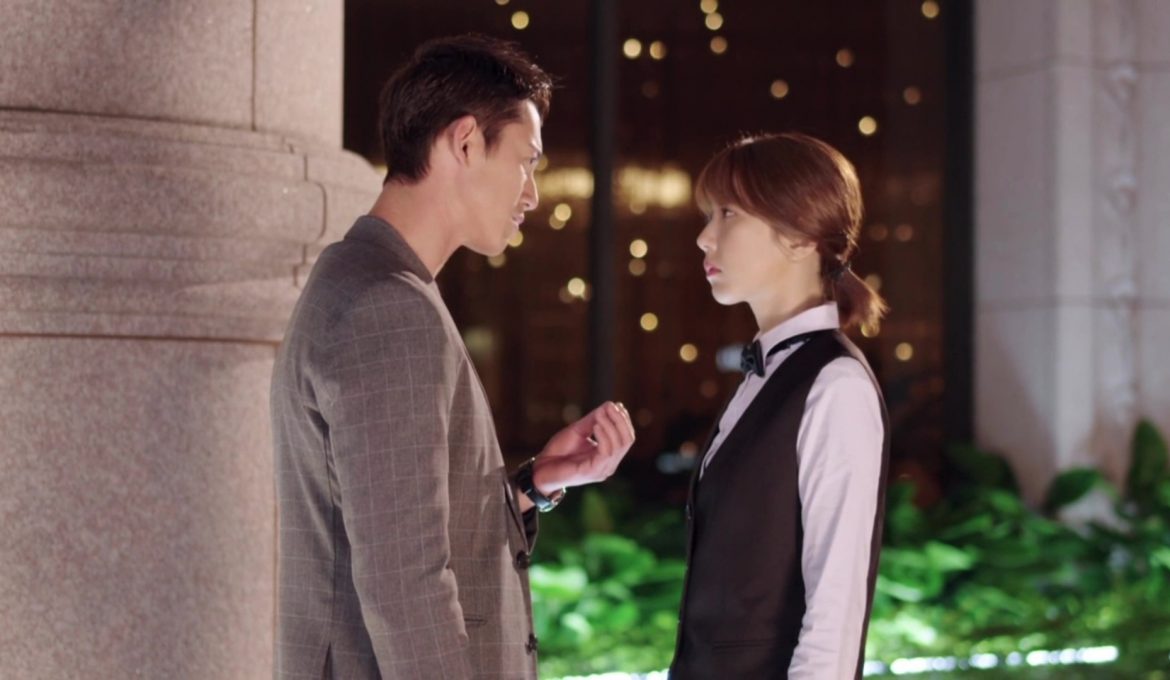 We thought the moment where Huo Ting En drapes his jacket over Wei Fen Qing’s shoulders was subtly sweet. We found the talk that takes place after that moment between Huo Ting En and Wei Fen Qing interesting. We also enjoyed the scene where Huo Ting En saves Meng Ru Xi from a couple of men wanting her to drink with them as well as the conversation they have afterwards.

But we found the night market dance that took place in the wine party really cringy and the conclusion of the wine party wasn’t enjoyable with it going in the typical direction of Huo Ting En and Wei Fen Qing drunk and ending in bed together that brought about scenes of the two scrambling to get away from each other. We did find it funny how even when Huo Ting En is drunk, he’s still teaching something about food to Wei Fen Qing, though.

Though we didn’t really enjoy all the drunk scenes or the dialogue much, we have to say we love Wu Kang Ren’s performance in the drunk scenes. He’s all out and it’s really entertaining to watch!

A new character was introduced. The new character is Wei Cheng Yang. He’s Wei Fen Qing’s younger brother. He’s young and a little irresponsible when he had to accompany his girlfriend to the gynecologist because she missed her period. There wasn’t much showing Wei Cheng Yang’s role in the story except that something is making him hesitant to accept their father’s cooking notebook when Wei Fen Qing decides she no longer needed to study and learn from it.

We see Huo Ting En’s feelings for Wei Fen Qing is increasing. It doesn’t seem like Huo Ting En is fully aware of his attraction towards Wei Fen Qing, though. He said his heart was thumping, yet he couldn’t pinpoint why. There’s a small hint Wei Fen Qing notices Huo Ting En. Even though it was brought on through Huo Ting En defining their relationship first, Wei Fen Qing moved Huo Ting En up to friend status from just being the chef she learns from. We’ll also count the one where she tells Huo Ting En to smile more because he’s cute when he smiles. She was drunk when she said this, but we’ll say it’s her unconscious thoughts speaking. :oP :oP.

Meng Ru Xi continues to be very interested in Huo Ting En. She feels they are a perfect match. But she isn’t clueless to knowing that Huo Ting En is not interested in her. She knows it’s because of their parents and that she is Meng Ru Xi and he is Huo Ting En that he’s not giving them a chance.

This problem that seems to be surrounding the two brothers was sort of hinted in the previous episode, when, at the wine party, President Wang went straight to greet Huo Ting En and passed Huo Tian Zhi and Yang Yu Qing who had gone to greet him. The series seem to have a generally light and comedic atmosphere, so we’re a bit unsure whether this small hint of problem between the brothers will develop into a dramatic problem in the story.

President Wang is impressed by Wei Fen Qing’s cooking skills. He says her dish had further brought out the fruity taste in the wine and it is the absolute perfect match for the wine—much to the happiness of Wei Fen Qing and Huo Ting En.

After the cooking challenge (and apparently some time with President Wang when he dragged Wei Fen Qing along to discuss what other dishes she knows of that can be paired up with his white wine), Wei Fen Qing sits outside at a table by herself. Huo Ting En finds her and joins her.

Huo Ting En is interested to know how Wei Fen Qing is finding the wine party. She’s enjoying it and finding the experience refreshing. He’s also interested to know what Wei Fen Qing’s thoughts are on opening a huge restaurant such as a chain restaurant one day. She, of course, will be very happy because she’d be able to help her mum lead a stress-free life as well as helping reclaim her dad’s title of being the Curry King. The happiness she’d feel from such achievement may not be as she imagines, Huo Ting En says when he explains that she’d have less time and have more things to be worried about such as being concerned about profits and taking care of employees and their families on top her own family.

The wine party ends with Huo Ting En and Wei Fen Qing in a haze from too much wine consumption and both end up at Huo Ting En’s home in Huo Ting En’s bed the next morning. Their recollection of yesterday night after the wine party is a blur. However, it slowly comes to them after they calm down from waking up next to each other. What had happened was that they had gone to Huo Ting En’s place after a talk in the car about caviar going well with the wine President Wang gifted Huo Ting En and Huo Ting En said he had them at his place. Wei Fen Qing had said she wanted to try it after he described caviar with the wine as feeling like swimming in the ocean when consumed together. How they became semi-naked and oddly dressed was a result of becoming hot from chanting La Mure’s team chant.

Huo Ting En misunderstands the situation as Wei Fen Qing needing to test if she was pregnant from yesterday night’s activities which he has no recollection of happening whatsoever. However, he will be responsible for her, Huo Ting En had said to Wei Fen Qing after he entered the room where Wei Fen Qing was. But the situation gets cleared up. He comes to realise it’s the girlfriend of Wei Fen Qing’s little brother who’d come to the clinic for the checkup.

Huo Ting En comes to join Wei Fen Qing in scolding Wei Cheng Yang’s naïve thoughts of believing he and his girlfriend will be happy if they had to face the situation of supporting their child without support of their parents. He comes in with the concern regarding their age, current education status, ability to find a job and the anxiety his girlfriend’s family may face. Huo Ting En realises he’s gotten a little too invested in Wei Fen Qing’s family’s affairs when he finds Wei Fen Qing’s surprised expression looking at him with a question of what got into him. He takes a back seat and lets Wei Fen Qing continue. But this brief moment of attention away from Wei Cheng Yang allows Wei Cheng Yang to make his exit.

At work, talking to his staff about Thai curry that will be part of La Mure’s summer menu and will be used in their next ambassador banquet, Huo Ting En’s attention is at times taken away by Wei Fen Qing. He’s momentarily taken by the sight of Wei Fen Qing listening diligently to him talking and instructing them about what ingredients to put in to produce the different colour variations of Thai curry. He watches her with a smile when she went about the task of making Thai curry.

This odd display of tenderness is noticed by Peng Xiao Bin. Peng Xiao Bin pulls Huo Ting En away from the group and ushers him to a corner and gets questioned about what happened last night. Huo Ting En doesn’t divulge but diverts to talking about Peng Xiao Bin’s night and how he’s feeling today. After the talk, Huo Ting En finds his heart thumping, but unsure why when he hasn’t done anything like have coffee to make it thump in the way it was.

Huo Ting En is brought back to the preparation table where Wei Fen Qing is when Jack scolds her for not following the recipe. Huo Ting En takes over from Jack in supervising Wei Fen Qing. Like Jack, he isn’t impressed Wei Fen Qing hadn’t followed the recipe. He asks her why she deviated from it. It’s that she remembered him saying that there is a need to be flexible with food. Huo Ting En explains she is incorrect to think she can make adjustments to a recipe. She must learn the basics before adjusting. Rules enable success.

With this error in judgement, Wei Fen Qing gets moved out of the kitchen and out to the front of the house to table service.

Wei Fen Qing makes an error in judgement in this area as well. After she raises her voice to rowdy patrons who had not booked and wished to order her fried chicken that they read about in an article (presumably Meng Ru Xi’s article as she was seen writing one), and after she tells them they aren’t welcomed to eat at their restaurant, Huo Ting En apologises to the patrons and takes her outside for a lecture on her attitude. The attitude she needs to have is to welcome all patrons. Huo Ting En goes to explain his purpose of sending her out to the front of the house. It’s so she can find out what kind of a chef she wants to be and the kind of restaurant she wants to open in the future. He then reiterates that rules enable success. He elaborates that a chef can be inventive when they become proficient. Becoming proficient is through repetitive and monotonous work. Regarding his restaurant, at La Mure, everyone is welcomed.

This lecture adjusts Wei Fen Qing’s attitude towards the rowdy group of patrons. She follows Huo Ting En’s example. She bows her head in sincere apology.