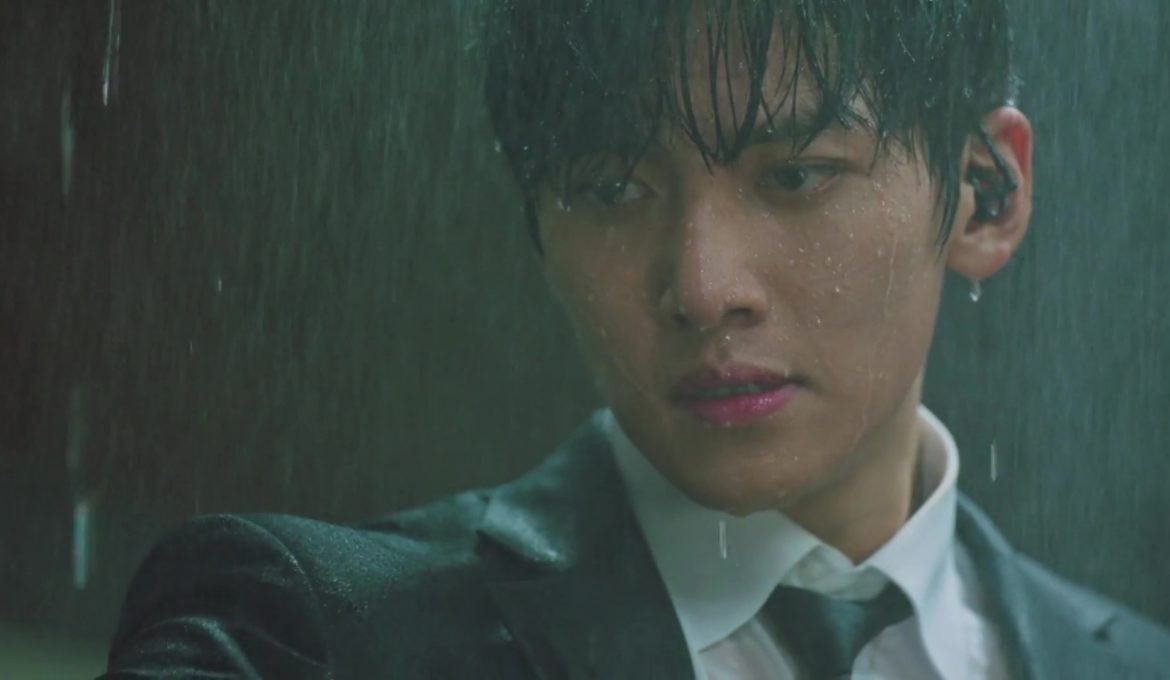 Choi Yoo Jin’s aunt, Choi Sun Ja, passes away in Episode 5. This has Choi Yoo Jin, and Choi Sung Won (her half-brother) and his parents gather for the reading of the will. Only one inheritor was mentioned in the reading of the will. That inheritor is Pyeongchang Scholarship Foundation. It’s an organisation Choi Yoo Jin is in charge of and seemingly its sole owner, but denies being such. So, effectively the fortune—JB Group shares and all—all goes to her.

The reading of the will is no surprise to Choi Sung Won and his family. In fact, in order for the reading of the will to go ahead, it was important Choi Yoo Jin was present because the will is securely locked in a suitcase with its key entrusted to Choi Yoo Jin by her late aunt. When the attorney motioned for someone within the gathered family members to present it, they all glanced over her way. Jang Se Joon was the one in the end to directly ask her about that key and have her bring it out.

This knowledge is why Choi Sung Won’s family have arranged for a lock-down at the temple’s Amitabha Shrine Room (the place the will reading is taking place). Perimeters are tightly guarded and phone calls in and out cannot be made. The family has used the reading of the will to lure and trap Choi Yoo Jin in the room so an emergency directors’ meeting can be held to force Choi Yoo Jin to part ways with her JB Group shares.

For the event Choi Yoo Jin rejects their offer to buy off her JB Group shares for thrice the price (which she does), the directors at the Foundation would elect to have Choi Yoo Jin deposed as the foundation’s CEO and elect a new one to replace her. The shares would then be sold off (to her half brother no doubt). She would then be reinstated to her position as CEO of the foundation once the JB Group shares go where they want them to go.

The scheming blindsides Choi Yoo Jin, but good thing she has Kim Je Ha on her security team. The aerial scan of the temple had the whole JSS staff concerned an attack would take place with such tight security around the temple. Choi Yoo Jin thought it to be safe to enter when Chief Joo adviced her of the situation. With Jang Se Joon by her side, they wouldn’t attempt an attack on her life. They need Jang Se Joon (we’re assuming Jang Se Joon becoming president has something to do with it).

In the time Chief Joo took to inform Choi Yoo Jin of the tight security and expressing his concerns about going in, Kim Je Ha had devised a simple plan to allow communication between them should she find herself in trouble. A pen was given to her to signal with. The first click is to tell him something’s up. Clicking it once actually switches the pen on so that a feed is established between the Amitabha Shrine Room and his position in the car. It allows Kim Je Ha to listen in to the conversation in the room. The second click is to inform she’s in danger. It’s not revealed what the second click does, but he does reveal it is a mode of communication he hopes he doesn’t have to use too often.

The plan doesn’t quite work the way it should as Choi Yoo Jin find herself enraged by the scheme that was taking place. Hearing that the Foundation planned to rid her of her CEO position, she unwittingly sends the pen (which she had earlier pressed once to turn it on) across the table to her half-brother, who presses it and cuts off the feed. His team leader, Team Leader Seo, assumes the cut feed is because they’re amidst talks over money and wants it private. Kim Je Ha, though, believes without doubt Choi Yoo Jin is in trouble. He concludes this because Choi Yoo Jin is not someone who would ever sell her ambitions off.

So, without Choi Yoo Jin’s command, Kim Je Ha makes the decision himself to get her out of the heavily guarded room by taking down the many guards lining the corridor. Then, to release the electronic locks on the doors, he creates a small fire so that they automatically unlock upon detecting fire within the vicinity. Sprinklers spraying, the Choi family leave. Choi Yoo Jin remains in her seat. Kim Je Ha comes in holding an umbrella like a perfect, well-trained bodyguard—only he isn’t all that well-trained as obedience is not something Kim Je Ha can be made to do.

Choi Yoo Jin appeared amazed by his ability to pick up on the fact she needed him without so much as a word or command from her, but as she continues in her thoughts, she realises how dangerous he his. She realises that he can’t be tamed, which brings her to calling for him to meet her up on what appears to be a very important place of Choi Yoo Jin’s, the ninth floor, or otherwise known as Cloud Nine.

Kim Je Ha’s quite the guy when it comes to helping people and making them happy. After his good deed for Song Young Choon, he moves to making Ko Anna smile and dance with the preparation of a pot of water, cracked egg, some spring onions and a packet of opened noodles, all ready for when Ko Anna comes down to the kitchen for her dinner. Kim Je Ha makes sure she gets to eat ramyun this time round.

Seeing her successfully cook her noodles and enjoy them, he takes his break outside like the night before. He stares up towards her window, smiling. Jang Mi Ran shows up at this time. She’s come out to explain her reason for missing his call for help the night before. She doesn’t tell him that she was dead asleep. That’d be embarrassing for her. Instead, she chooses to explain that she did hear his call and thought about picking it up, but ended up choosing not to pick it up. They move to sitting at the bench outside where, after Jang Mi Ran gropes Kim Je Ha’s arm and touches his leg, they get to talking about Ko Anna and her dad, Jang Se Joon. It’s a topic Kim Je Ha is quite interested in. He learns the reason she was always on the run was because of Jang Se Joon. She wanted and insisted on finding him, not knowing that he had no interest in seeing her. He learns that Jang Mi Ran had reported Ko Anna’s desire to meet him, but received no response either way from him. Even when he was in Madrid, he didn’t go see her.

The conversation comes to an end when a call from the Situation Room comes through to relieve Kim Je Ha of his duty for the night. Shortly after Jang Mi Ran forwards this information to Kim e Ha, Kim Je Ha receives a call from Chief Joo to return to the company building. It’s the call to go to Cloud Nine on the nineth floor. This place, one would expect to exist somewhere above ground floor, but when Kim Je Ha enters the elevator and is cleared to go to Cloud Nine, the elevator descends rather than ascend. Cloud Nine is down in the basement of the building. It’s a well-lit place with a long corridor.

We felt for Choi Yoo Jin in this one. She was like a defenseless animal in a cage, unable to make any move to save herself in this one. It’s just fortunate she had Kim Je Ha, such a competent bodyguard, protecting her. We’re not sure if we should start feeling sorry for her, since up until this point, she was the bad guy wanting to cage up Ko Anna and kill Kim Je Ha in the past.

Episode 5 revealed a bit about the family situation, which makes us wonder whether Choi Yoo Jin really is the Bad Guy like she was portrayed in the earlier episodes. She seems to be the rightful heir to the company, but according to the her dad’s mistress, Choi Sung Won’s mother, the company was given to her half-brother, Choi Sung Won, because her father didn’t love Choi Yoo Jin and didn’t trust the company under her hands. He also feared what she’d do to Choi Sung Won. Despite that, it feels like it’s these partial-heirs to the company who are trying to take what should rightfully be hers.

Jang Se Joon was portrayed as even more despicable in this episode. He really only cares about becoming president. If it meant that Choi Yoo Jin loses her JB Group, then so be it. That was his attitude when she was caught unawares of this scheme to rid her control of Pyeongchang Scholarship Foundation and by extension JB Group. Whether Jang Se Joon places winning presidency over his daughter, Ko Anna, though, is not so clear. In the earlier episodes, he came off as someone who has no choice but to ignore his daughter for the time being, until he wins presidency. Jang Se Joon might be misunderstood by Jang Mi Ran in that area.

Right at the moment, only Park Kwan Soo comes off as a common enemy of all three. But, there isn’t enough development to really incriminate him in any all the things he’s suspected of doing. In this episode, there was yet more hints at what he’s doing to make him someone who hold the most power amongst the presidential candidates. He seems to be winning support of a certain group of people by giving handouts in the form of cold hard cash. These people were suggested to be district heads/councillors.

Great episode! Can’t wait to see more of what Choi Yoo Jin has instore for Kim Je Ha with that invitation to Cloud Nine. We’re hoping Choi Yoo Jin is just a misunderstood character in this drama and she really isn’t as bad as Ko Anna, Jang Se Joon and her relatives make her out to be.