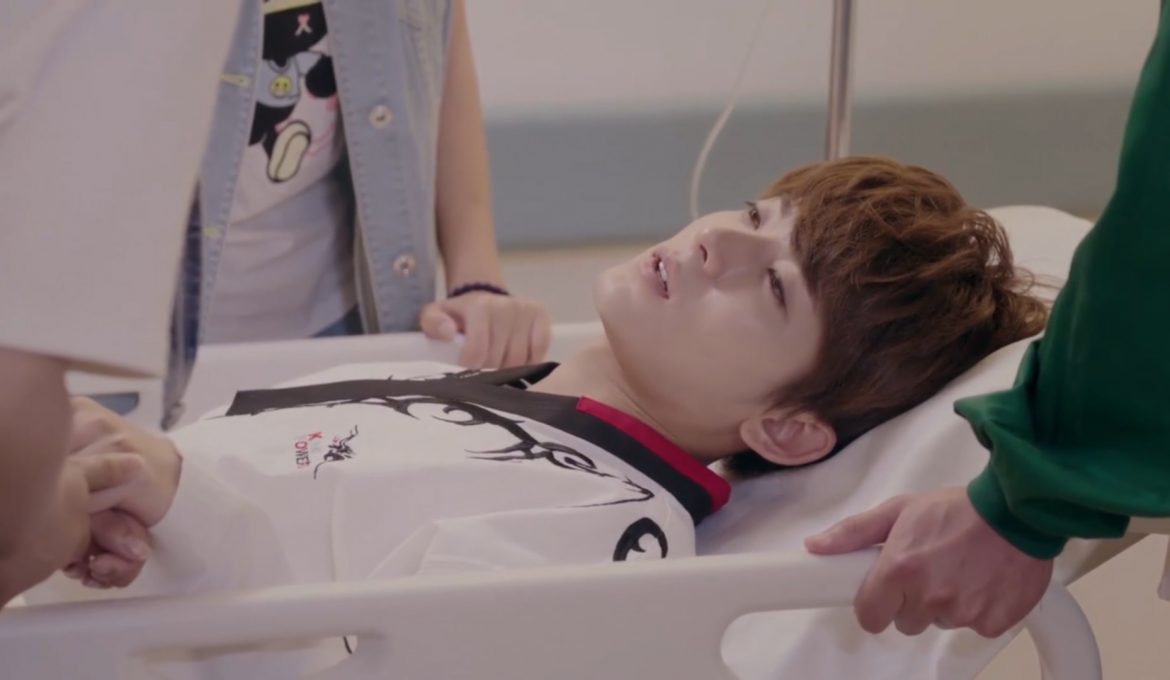 This episode brings Fang Ting Hao to again be quite forceful with his wants when he shows how much he isn’t able to let go of his feelings for Qi Bai Cao. He gets into a serious accident when he goes to help Song Bai with their situation of a takeover by Xin Song Bai. Fang Ting Hao uses his situation of being seriously injured to force Qi Bai Cao to be his girlfriend. He does this when he’s taken to the operating theatre after the serious accident he gets into during the meeting he had with Ye Chong up at a rooftop balcony.

This meeting Fang Ting Hao has with Ye Chong shows us both aren’t strangers to each other. They speak about a Three Person Tournament they had faced each other off in. That competition had seen Ye Chong losing to Fang Ting Hao which saw Fang Ting Hao describing their fighting as lacking skill. Ye Chong seem to still be affected by the loss when he immediately agrees to Fang Ting Hao’s offer to give him a second chance to fight him.

It feels like Fang Ting Hao had a plan to use Ye Chong’s dissatisfaction towards the defeat in that competition to help Song Bai. When Fang Ting Hao offers Ye Chong the opportunity to fight him, he makes a request. It is that if he defeats him, they must give Song Bai a chance and not take them over directly. Fang Ting Hao also offers something in return if Ye Chong wins him. He offers to fulfill any request he wants and will apologise to everyone standing here today for the words he said about Ye Chong and his team’s fighting style. Ye Chong is somewhat unwilling to accept the challenge because it’s a must that they take over Song Bai in order to right a wrong for their ancestors.

But, fighting eventually takes place. Fang Ting Hao only defends. It’s what he promised Ye Chong he’d do for one minute. After the one minute, Fang Ting Hao starts attacking.

Immediately, we see Fang Ting Hao’s superior fighting skills. Ye Chong constantly goes on the defensive. The fight takes an unexpected turn, however, when one of Fang Ting Hao’s attacks brings Ye Chong to be on the verge of going over and off the balcony ledge he stands on. Fortunately, Fang Ting Hao reacts quickly and manages to grab hold of Ye Chong’s hand and brings him back to stable ground.

But danger comes towards Fang Ting Hao in the form of a punching bag swinging towards him. It’s the punching bag that Ye Chong had knocked into due to Fang Ting Hao’s strong attack. It has Fang Ting Hao pushed over the balcony ledge and free-falling many metres down. He makes contact with a canopy which ever so slightly lessens the painful impact that comes from meeting the harsh and rigid ground.

Chang An misses his meetup with Qi Bai Cao. He returns back to his place (what looks to be) many hours after his meeting with Feng Yun when it’s pitch dark in his place; and it’s his injured leg that has caused him to come back so late. Chang An perspires heavily from the excruciating pain in his knee.

Where Chang An returns back to his place in excruciating pain—it is consequence for not complying with the command.

We are also told that this Chen Zhou is the person who had made Chang An’s leg the way it is now. He had disabled it in a competition.

Feng Yun seems to be not out of options in their goal of getting Chang An returning back to Feng Yun. It’s by going to Ye Chong.

Kicking Chang An out is out of the question for Song Bai. Lu Fei Yu, the original successor of Song Bai, also agrees with them. He tells Ye Chong it is not the way of Song Bai and he won’t permit it.

So, Episode 16 brings in a new development to the relationship between Qi Bai Cao and Chang An with bringing back Fang Ting Hao as a love rival who now pushes his way through.

We’re not too sure what will come from Fang Ting Hao becoming Qi Bai Cao’s boyfriend. Usually it can bring in jealousy from the male lead character. But Chang An is not indifferent to Qi Bai Cao. He’s not hiding his feelings. He’s not stronger than Fang Ting Hao when it comes to winning over Qi Bai Cao, either. Qi Bai Cao is very indifferent to both guys who are showing so much like towards her. Seeing jealousy coming from Chang An isn’t something that will be creating the excitement.

Chang An and Qi Bai Cao are cute together, but they can be cuter together with a bit more coming from Qi Bai Cao’s side. We would like something to happen that has Qi Bai Cao show signs of seeing Chang An as more than just her instructor who she also sees as a family member of her Song Bai family. That’s not saying we aren’t liking the pacing of the development for the two. It’s more simply wondering when it will be that we’ll see Qi Bai Cao start to act like Chang An who does really cute things because he likes Qi Bai Cao. Oh. So. Cute!

Fang Ting Hao was very cool in this one. He was the star of the episode for us with that show of his awesome fighting skills against Ye Chong. It was brief, but really awesome! He looked really strong and skilled. And that strength and skill in fighting really did help give Song Bai an opportunity to reclaim their hall back. Too awesome.