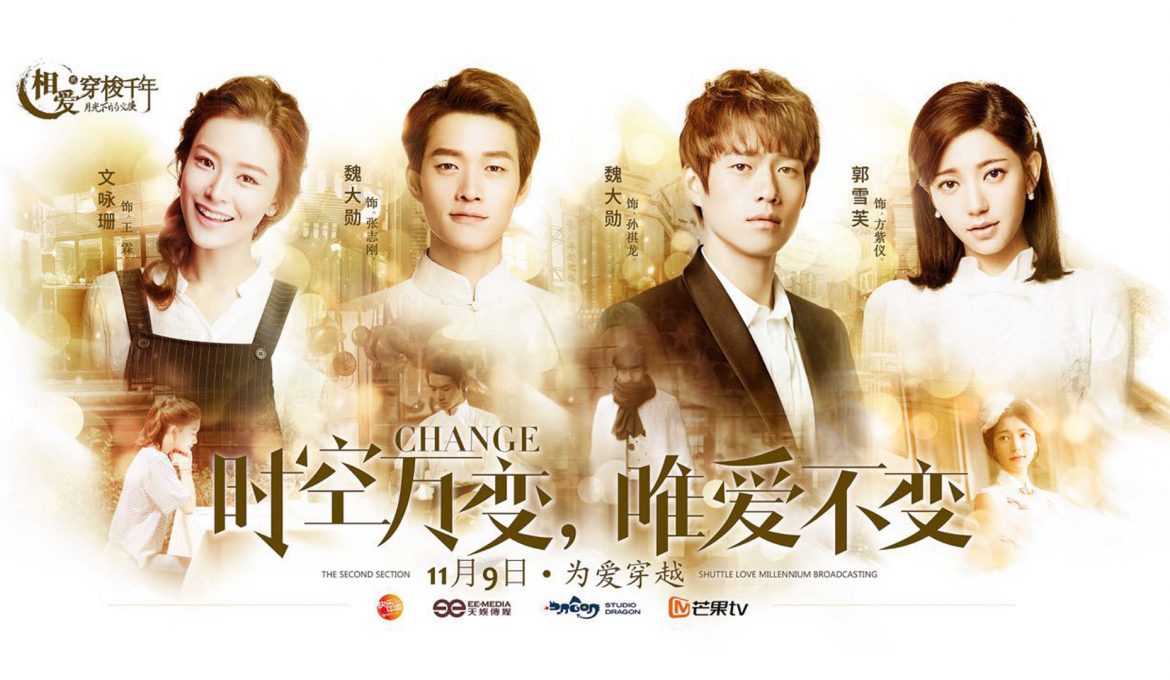 Shuttle Love Millennium – 相爱穿梭千年2 is a sequel to the 2015 Mainland Chinese drama Love Through the Millennium which was based off from the 2012 Korean drama, Queen In Hyun’s Man.

There were some points in the series where we thought it moved particularly slowly. However, slow as some parts were, we could see the story was definitely going somewhere and only needed to be patient and wait for the developments to build and become something interesting. When the story started to get going, we found the story extremely chase-able.

We found some points in the story quite frustrating. It was during moments where we felt there was a deliberate delaying of relaying information to characters—but, we guess this is what kept things interesting and made our eyes glued to the screen and moving from episode to episode.

The time paradoxes that exist in the story dug our head in as we tried to think how it was possible that actions from a person from the future occurring in the past come to be the future. The ending was even more odd and hard to make sense of.

We enjoyed watching Wei Da Xun play the lead male characters, Zhang Zhi Gang and Sun Qi Long. We were really impressed with how he made the two characters feel like different characters—as if they weren’t played by the same actor. There was only one period where we thought, ‘Oh, that was a bit like Zhang Zhi Gang’. We thought this when Sun Qi Long wasn’t his carefree self and was a bit serious. But, we were definitely impressed by how different the characters were.

The story in Shuttle Love Millennium is one that takes place in 2016 Shanghai and 1936 Shanghai. The time travelling occurs between an heir to Shiheng Group, Sun Qi Long (Wei Da Xun), and a chef, Zhang Zhi Gang (Wei Da Xun).

The two people from different time periods have the same face. This is what allows for a swap to take place between the two people and not have those they come to interact with find them as someone they don’t know. Sun Qi Long and Zhang Zhi Gang have different personalities, though. Sun Qi Long, who is from 2016, is self-assured. He has a party lifestyle and likes money to support his party lifestyle. Meanwhile, Zhang Zhi Gang, who comes from 1936, has a more serious and studious character about him. He is a talented chef at his Western style restaurant called La Lune Bleue. Zhang Zhi Gang is also skilled in martial arts (we think it’s Tai Chi from the looks of the defensive moves he does).

Sun Qi Long is only given 100 days to obtain the wine. He immediately heads to Wang’s wine distillery. Here, he comes to meet Wang Lin (Janice Wen), granddaughter of the owner of the distillery. Wang Lin is the one currently looking after the distillery whilst her grandfather seems to have gone on one of his long trips in search of ancient items.

It’s not easy for Sun Qi Long to have Wang Lin agree to sell her ancient wedding wine to him when the wine is for when she gets married. He does eventually manage to get Wang Lin to agree to selling her wedding wine when he sets up a contract that agrees to pay her a sum that helps her pay off the huge loan she borrowed from angry loan sharks who had come barging into the distillery looking for repayment of the loan. He also offers to marry her in order to fulfill the fact of the wedding wine being for a wedding.

The condition for time travelling to occur between Sun Qi Long and Zhang Zhi Gang seems to be met on Sun Qi Long’s side of things: he has the ancient wedding wine and he has the jade pendant—which, unknown to him, it is an item that has the ability to allow the wearer to time travel.

The condition seems to be also met on Zhang Zhi Gang’s side when he also wears a jade pendant and he obtains a wedding wine as well. This wedding wine he has is one given by his fiancée’s father—Fang Si Yi’s (Puff Guo) father. The wedding wine only needs to be drunk. Zhang Zhi Gang is the one to drink the wedding wine when droplets of the wine makes contact and enters into his mouth after a fight with mysterious men who entered into his restaurant at night brings Zhang Zhi Gang to sit underneath the wine bottle that was broken by a bullet and tipped over.

Zhang Zhi Gang from 1936 comes to 2016 and Sun Qi Long heads back into the past to 1936. Each come to meet the people in the other person’s lives. Things start to get complicated for the two men as they interact more with those in each other’s world and they begin to want to remain in the world they travelled to, but don’t belong in.