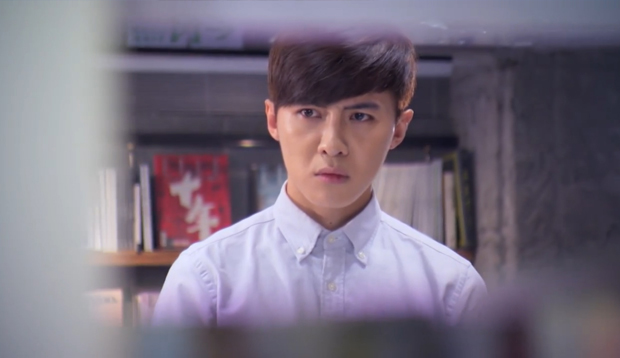 Xiang Zi Yan (Jolin Chien) returns! We were just wondering when he was going to return; he’s been missing in action for so long! We see him in the opening credits every episode, but he’s not actually in the episode, which is strange. But then a little over mid-way through Episode 12, he appears! It’s fantastic Xiang Zi Yan is back, because, firstly it means the story is picking up even more; and secondly, because if the drama gets too much between Guan Xiao Tong, Ji Jia Wei and He Zhi Yu, we can hope for Xiang Zi Yan to balance things out.

In the last episode, Guan Xiao Tong was asked by her ex, Du Kai Wen, to help put together some notes on how she might help his patient recover from post-traumatic-stress-disorder which resulted from a car accident. As Guan Xiao Tong had a radio appearance as Dr. Love to attend, Ji Jia Wei was asked to deliver the notes. During this visit, he sees someone look like He Zhi Yu enter the very office of the psychiatrist he was to deliver the notes.

He isn’t allowed to confirm whether it is her on the spot (Du Kai Wen stops him from entering just in time), but after connecting all the clues from past conversations from He Zhi Yu, from Guan Xiao Tong‘s overview of the patient she was writing notes for, and from the information he got from He Zhi Yu‘s assistant that she can’t drive, he connects it to He Zhi Yu. He returns shortly after to question Du Kai Wen. Du Kai Wen doesn’t confirm it, but as Ji Jia Wei already guessed who it was and he was an important part to her recovery, he lets him into the office to hear He Zhi Yu‘s express her thoughts and feelings about the accident and the past year from afar without her knowing he was there.

The discovery shocks Ji Jia Wei and causes him to disappear off, forgetting that after delivering the notes, he was supposed to be on standby and wait for a call from the radio show producers Guan Xiao Tong was appearing on. The call was supposed to round off her segment which talks about finding love, her 4G theory, and finding strength and moving forward when one fails in love; but she is left hanging as producers end up not getting through the whole time they were on air, embarrassing her and I Meet You Dating Agency. This time, Xiang Zi Yan doesn’t arrive to save the day like the last big event, but he does arrive after the show to bargain for a second chance for Guan Xiao Tong. He succeeds after the radio producer pulls his car out suddenly, hitting Xiang Zi Yan‘s Mercedez Benz. He agrees to give Guan Xiao Tong a second chance over paying for the damage on Xiang Zi Yan‘s car.

The episode ends with Xiang Zi Yan following at a distance as Guan Xiao Tong walks home in the dark calling friend after friend of Ji Jia Wei‘s and getting no information regarding his whereabouts.

It’s always the way! We should have known that after the successful meeting with the parents, He Zhi Yu‘s story was going to be revealed to Ji Jia Wei. The parents accepts him and Guan Xiao Tong is starting to be braver and moving towards him. Not only that, after the meeting with the parents ended, Guan Xiao Tong moves in to kiss Ji Jia Wei for making such an effort with her parents. It was only on the forehead, but she made the first move which she’s never done in the past with anything. This had to be the point where He Zhi Yu‘s story get revealed so that trust could be questioned and turn it all back to worry and insecurity.

Having said that, we do like Episode 12. As nice as it was to see Guan Xiao Tong and Ji Jia Wei develop so nicely over the last few episodes, story-wise it’s been pretty stagnant. Guan Xiao Tong and Ji Jia Wei continued getting along like the previous episode, whilst He Zhi Yu racked up hits against her as Ji Jia Wei spoke harsh words and accused her of things she hasn’t done. The way we see it, the greater the misunderstanding created, the heavier the drama angst later on; so it’s great to know that everything’s now out in the open and there are no more chances for Ji Jia Wei to misunderstand He Zhi Yu and no more chances to potentially increase the level of drama angst in later episodes! Now, all we have to worry about is his reaction to all of it.