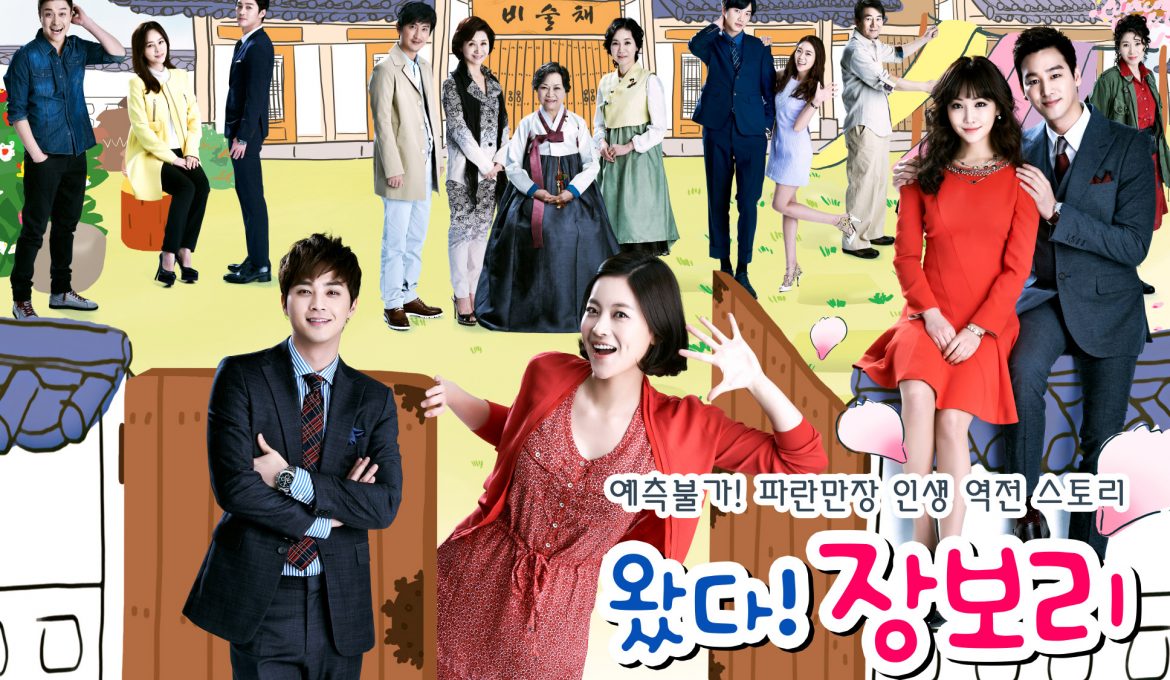 Jang Bo Ri is Here is a seriously addictive series! It took around two weeks to get through the 52 episodes. You think you’ll just watch maybe a couple of episodes, but it turns into three, then four then five. The series has this knack of ending the episodes at points where you can’t help but watch the next episode and the next and the next to see how it all plays out.

For the next decade, Jang Eun Bi‘s whereabouts remains unknown to the family as a poor rice soup shop owner, Do Hye Ok (Hwang Young Hee), takes her in to live in Jangheung without notifying the police of having picked her up after accidentally hitting her with her truck in Jeonju, fearing she’d face criminal charges. Jang Eun Bi, now Do Hye Ok‘s daughter and known as Do Bo Ri, lives the life of a slave to Do Hye Ok, abused and put to work at the rice soup shop. Meanwhile, Do Hye Ok‘s real daughter, Yeon Min Jung (Lee Yoo Ri), lives affluently as she becomes the sponsee (and later the adopted daughter) of Bi Sool Chae‘s Kim In Hwa and husband Jang Soo Bong (Ahn Nae Sang) after the nine-year-old lies about being an orphan and convinces them to take her in after winning Bi Sool Chae‘s art competition using Jang Eun Bi‘s drawing.

Do Bo Ri, Yeon Min Jung, the family members of Bi Sool Chae all meet again when Do Bo Ri, unknownst to her, coincidentally meets her aunt, Song Ok Soo, in Jangheung, leading her to her real family in Bi Sool Chae again.

Yeon Min Jung is the centre of all the drama in Jang Bo Ri is Here. The want to see antagonist Yeon Min Jung brought down and get what she deserves is what keeps us watching episode after episode. Her ruthless ways, using anything and everything, turning on anyone and everyone to make sure she gets the life makes us super impatient to see the final episode and watch her inevitable downfall. Every time she’s on screen, it’s hard to not grit your teeth or hit the screen with something. As the series reiterates often, she’s not human. It’s fortunate that Yeon Min Jung doesn’t get her way so completely though as right next to her is her ex-fiancé, Moon Ji Sang (Sung Hyuk), and father of the baby she bore and abandoned, planning and scheming to reveal her lies and true nature as payback for her cruel treatment towards him.

The unknown fact that Do Bo Ri is Jang Bo Ri, its revelation, is the part of the series that keeps us watching. Do Bo Ri is hated by Kim In Hwa when she enters Bi Seul Chae as a student of Master Artisan Park Soo Mi, and has been slapped harshly in the face a couple of times all the while talking about how she could never take the place of Jang Eun Bi, not knowing she had just slapped her own daughter. Then there’s the relationship between Lee Jae Hwa (Kim Ji Hoon) and Do Bo Ri. Although Lee Jae Hwa loves Do Bo Ri, he admits that he still thinks about Jang Eun Bi to the present and is eagerly waiting for her return. He also told Do Bo Ri that between her and Jang Eun Bi, who he wanted to hear the address of “oppa” more, it was Jang Eun Bi he wanted to hear address him that way more.

This series is really a fantastic watch. The drama develops well. The characters react the way we hoped they would and it ended the way we had expected. Though the antagonistic actions of Yeon Min Jung as well as the actions of the devoted real mother of hers, Do Hye Ok, can be so frustrating as it prevents the good guys from winning, but Yeon Min Jung‘s inevitable downfall is worth the frustration. (Lee Yoo Ri does a fantastic job with Yeon Min Jung. It’s quite a sight watching this actress play this character! She looks like she’s really love it and enjoys indulging in the evilness of Yeon Min Jung.) Fifty-two episodes looks long, but once you get into it, the episodes fly by.