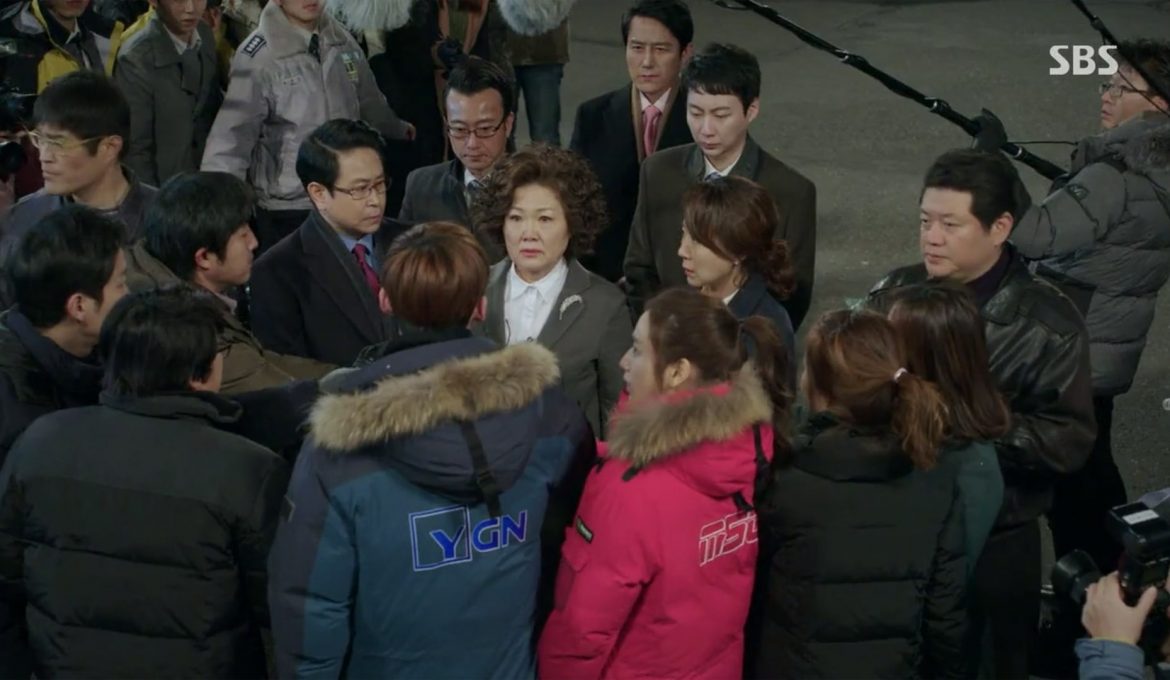 We’re at the end of Pinocchio. Our final thoughts: it starts off well and continues to go well till Episode 12. We get to Episode 13 up to Episode 17 and the series really slows down.

After Ki Jae Myung is sent to jail, weakly-connected cases relating to the main story feature before an incident similar to the incident that happened 13 years ago sets the main story in motion. This time, police officer and friend to Ki Ha Myung and Choi In Ha, Ahn Chan Soo, is made the scapegoat to a warehouse explosion that occurred on his watch by Song Cha Ok. It leads to the digging up of the 13-year old incident and the unraveling of what went on 13 years ago. Song Cha Ok is revealed to be once an honest reporter, put on the wrong path as she is convinced to divert media attention to save a senator upon the request of business woman, Chaiman Park Rosa (who’s the mother of Seo Beom Jo (Kim Young Hwang), Choi In Ha‘s work partner at MSC newsroom).

Song Cha Ok is eventually caught as her old cellphone containing text messages of her involvement in making Ki Ha Myung‘s father the scapegoat lands in the hands of her daughter. Choi In Ha confronts her mother about them and is set to have the information revealed to the world. Unable to get the news about one of MSC‘s own anchor to air, she hands the information to Ki Ha Myung to report it. He initially runs with it, but upon realising the report will ruin Choi In Ha‘s career (being a whistleblower), he hands the information back to Song Cha Ok, placing blind faith that she will do the right thing and report her misconduct as a reporter herself and exonerate his father.

We really liked this point in the series where the ball is put back in Song Cha Ok‘s court, but before we were lead to this point, it was a slow watch. Bringing in the 13-year-old case this way isn’t bad: we get some good face-offs between Song Cha Ok and Ki Ha Myung, and it brings to light what happened in the past; but in between all of this are scenes filled with Choi In Ha and Ki Ha Myung‘s relationship and the love triangle between Choi In Ha, Ki Ha Myung and Seo Beom Jo.

We had trouble getting through the romance arc. The obvious service to fans of creating some sweet moments and skinship the series could have done without or less of. We were not fans of the attempts to creatively create moments like toast kiss and that kissing of the hand and placing it on the other person’s forehead. There were also scenes that were unnaturally brought in, for example, the scene where Ki Ha Myung reconciles with Choi In Ha and pulls her in to kiss her in Episode 15; then there is also the scene where Choi In Ha is embarrassed about being alone with Ki Ha Myung in his apartment. Choi In Ha‘s reaction to going to his apartment is too forced: she once lived with him and used to go into his room as well. It shouldn’t have been a big deal. The relationship between Ki Ha Myung and Choi In Ha was useful in the story when his feelings for Choi In Ha was keeping him in check and from going overboard with revenge, but those kinds of scenes didn’t need to be brought in as much as the series did.

Thinking about the series, Pinocchio feels is a little disjointed. The main story is made up of seemingly unrelated news investigations, which we later find out are related (or are made to be related) to the main story. Then seemingly to keep shippers happy, the romance arc is unnaturally forced in. Pinocchio is definitely not the most naturally flowing series we’ve watched.

This series had a lot of potential to be good with the way it started as well as the theme it was based around, but for us, it fell short. We had initially thought the series was going to use the power of the media and their practices as an underlying theme throughout—this is the impression it gave when it started with scapegoating Ki Ha Myung‘s father—but it moved off from that half way through the series and into the external influences media sometimes faces (i.e. Chairman Park) before the series showed a cleaning up of the media by having honest reporters present the news (at least that’s the message we got from the end anyway). Add the romance arc which comes in like a mini side-story, the series then become a little too unfocused for us.

We do like the ending; we like some of the lighter moments that featured in the series, in particular, the ones featuring Yoon Yoo Rae (Lee Yoo Bi). All characters are likable: there weren’t really any dislikable ones in Pinocchio. We particularly Hwang Gyo Dong (Lee Pil Mo), Ki Jae Myung, Ki Ha Myung and Yoon Yoo Rae (we disliked her at the beginning, but she grew on us!). We also really liked the main story with Ki Ha Myung trying to expose Song Cha Ok and the theme Pinocchio is based on. If only the series flowed a little more naturally, Episodes 13 to 17 done a little differently and the relationship-developing scenes cut down, it could have turned out to be a great watch. Instead, it was a slow watch after Episode 12. Only at Episode 18 did the series pick up again as the series fully focused on the main story again; but still, had the last three episodes not been released all in one week, we may still have struggled to finish the series.

(What do people think of the use of Choi In Ha‘s hiccups in the series? For us, it was very confusing. Hiccuping means she’s lying, but it seems it can mean guilt or an unclear conscience. The way it was used for not only when she was clearly telling a lie but also in times when she felt uncomfortable about a situation makes the whole Pinocchio concept feel like a plot device, the bad kind.)