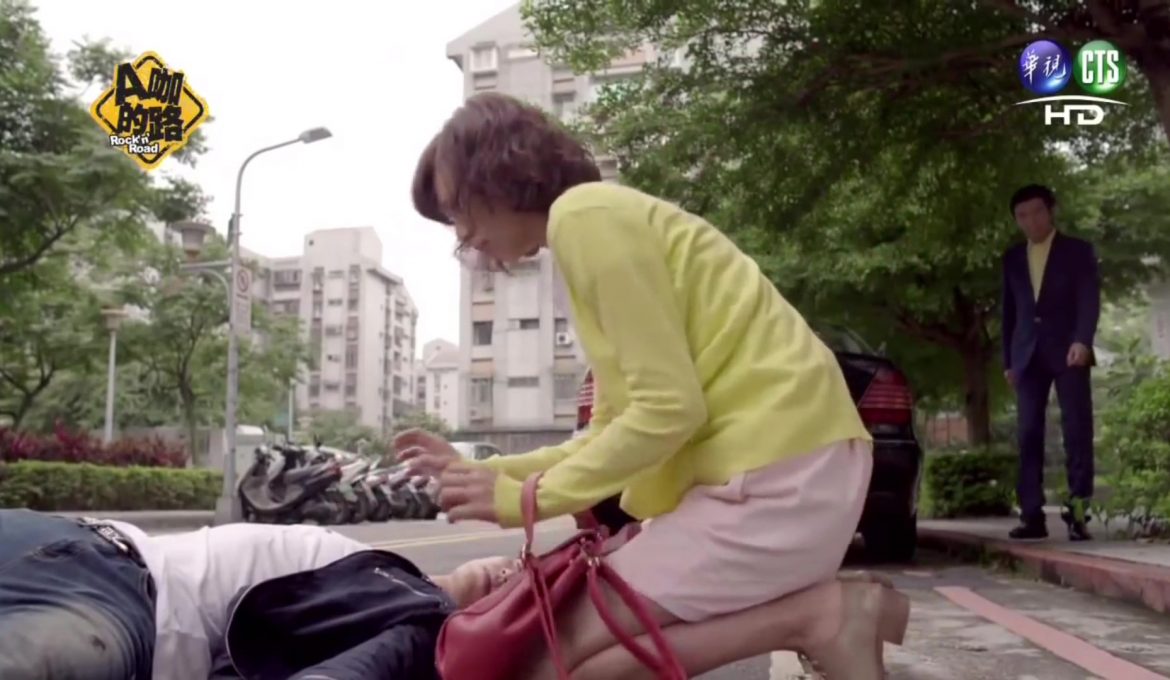 It was hard for us to watch Zhou Shu Yu try to keep Lin Wei Zhen unaware of his spells. It’s not so bad when he’s at the beginning of a spell and is able to slip out of the room in time. It’s when he tries to act upbeat, alert and aware when he’s actually the opposite. At one point, we wished he could magically get better, so he doesn’t have to try hard to find ways to hide his spells from Lin Wei Zhen.

Though Episode 15 had a more serious tone with the development of Zhou Shu Yu having a medical condition, the episode was still light. It doesn’t go down the road of melodrama that usually accompanies this sort of development: Zhou Shu Yu‘s condition quickly gets revealed in the very first scene of the episode where Zhou Shu Yu again collapses to the ground from the bombardment of reporters surrounding him at Lin Wei Zhen‘s spokesperson job after his medical records gets leaked out and distributed onto the phones of the event goers. The next scene is in the hospital where Lin Wei Zhen is there at Zhou Shu Yu‘s bedside whilst Old Ge (Lai Qian Rui‘s father) is out in the corridors with the media explaining it all. With one more scene focusing on Zhou Shu Yu‘s condition (a very sweet and cute scene where Lin Wei Zhen takes care of Zhou Shu Yu, by the way) the focus goes straight back onto Lin Wei Zhen‘s goal of becoming an A-lister. Zhou Shu Yu‘s condition only continues in the background. On one occasion, it did cause a rather devastating blow to Lin Wei Zhen during her audition, but that was effectively turned around a scene later.

The plot of Bai Hui Lan, of which appeared in the early episodes, came back in this episode. This plot, and details from this plot, did slip our mind because it doesn’t really make too much of a grand appearance when it does appear. But, this really brought in a new and interesting relationship development linking Zhou Shu Yu to BS Entertainment.

Things are tying up; supporting characters are exiting; and enemies are no longer enemies. As that is, even at the second to last episode, it feels like there is still so much more to come. There’s so much development that it feels like there is enough for a sequel! We wish there was a sequel after the final episode. We totally love the world that has been created in Rock N’ Road. We love Lin Wei Zhen and Zhou Shu Yu: their relationship is too sweet; and Kimi Hsia’s and Wu Kang Ren’s performances make their interactions appear so natural.

The final episode airs tonight in Taiwan. The preview for it looks really good. What looks particularly interesting is Zhou Shu Yu‘s side of things. Lin Wei Zhen‘s side is also interesting: it seems she meets a few people whilst she is living her dream; it seems one of them is looking to steal her away. A love triangle coming in at the very last episode—that’s unusual, but interesting! We don’t want Rock N’ Road to end, but we can’t wait to see what happens in the final episode and see how it ends!